My hotel had a epic complimentary breakfast. I had a big waffle with butter and syrup, yogurt, orange juice and coffee.

I walked a mile to the store. I bought some cold medicine and a second pair of insoles. A second set of insoles is a trick I’ve used before. They’ll fit a little differently. I’ll swap them out with my current set during the day. It should help with achy feet.

I called the recommended taxi number.  He estimated $15 to get two miles back to the trail. I called a second #. $5 he said, and that’s what it was.

I stood at the point where my route diverged from where the Katy Trail led quietly away through the trees. Instead I followed the route of the Santa Fe Trail out of Boonville.

Yards were green, trees blossoming. There were many old houses, up high, along the old trail, homes with a view.

It was a real road walk now, but through beautiful, rolling, prosperous farm country. Traffic was light. Although the shoulder was narrow, people were very considerate. People in my lane typically veered to the other lane and waved as the went by. The only unpleasant part of the day was when the route paralleled Interstate 70 for a mile or so. 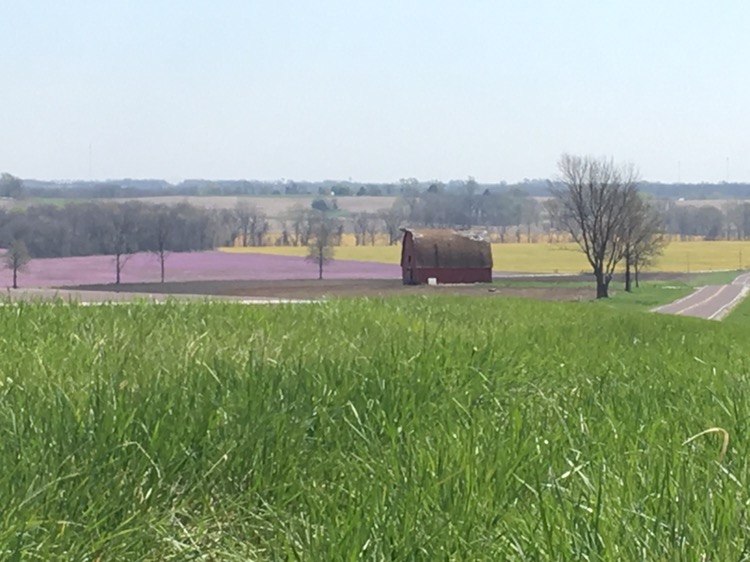 I noticed the first meadowlarks. Tree leaves are about 1/4 out.

My new knucklehead bank called. This guy was explaining how they’d ironed things out. He was tallying the figures for me. I realized before he did that he didn’t know what he was talking about. He had to call back with corrected figures. It finally is all resolved now however.

Late in the day there was some public land with a big chunk of woods.  I camped near a little brook. It was a good, 20 mile day.

I went out…and found the Countrey for one mile back good Land and well watered the hills not high with a gentle assent from the river, well timbered with oake, walnit Hickory ash, &c. the land Still further back becoms thin and open, with Black & rasp Berries, and Still further back the Plains Commence…our hunter Killed, 2 Deer, after Staying one hour at the mouth of this River, Cap Lewis went out & proceeded on one Mile & came in, he fount the land in the point high and fine