Endicott Mountains on my Alaska Traverse

Hello to all my friends, family and visitors. This webpage will contain updates on my solo traverse of Alaska. The below plans are subject to change. I like to be flexible in my routes and schedules. There are many factors involved in completing such a trip, and not all of them are controllable. But, with a little luck, here is my general idea of how my trip might progress:

The rectangle outlined on the below map of Alaska shows the area of my hike. This region is blown up in the second map. 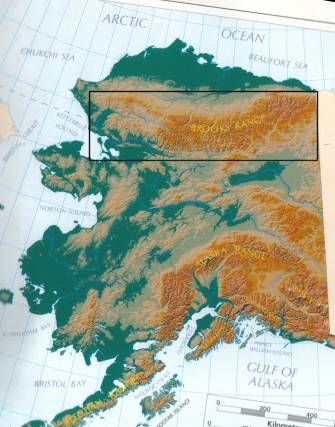 The below map shows the approximate location of some key points along my planned route.

Buck, I’m 72 in very good shape, worked for Red Adney when I was a kid. I’d love to try your first part of the trip to the haul rd from where you started would you mind sharing your route? I hope this request/question is not offensive. If so my apology.

Hi Mike, I’ve seen you on the Alaska Outdoors forum! You can see the general layout of my route on the map on this page as well as my route description. I don’t have a GPS track or even an accurate line drawn on a map. Nowadays, with Google Earth, you could probably plan a route as good or better using my general route as a starting point. The most marginal part of my route was, as I recall, a pass crossing from the Hula Hula over into the Canning River. I ended up walking up a canyon following a… Read more »