It was a luxury, drinking coffee, reading, touching up my shoe repair, and letting my tent dry a bit before packing up.

There were several stretches of river where I could make good progress paddling, others where I had to sprint through the fast current around rocky points, and many where the water was so swift or shallow I had to get out and pull.

The Carter Ferry had just landed on the south bank just ahead of me. The operator kept his back to me, talking to the car driver, so I paddled around.

Finally he said “Where are you headed?”

“The Pacific. I’m doing the Lewis and Clark Trail.”

“Upstream?” He said, with what struck me as studied indifference.

“Do you know there are falls and dams 17 miles ahead of you? You’ll have to get a ride.”

I FELT like saying. “Really? I hope there aren’t any mountains!” Instead I told him I knew about the portage.

Finally I said “Have a good day.” If he heard, I heard no reply, so I just paddled away.

The winds were fairly neutral today, mixed directions and not too strong. The current was unusually fast again though.
There were numerous Pelicans as there has been for much of a thousand miles.

In the last two days at least two big fish have thumped my kayak, and I bumped into one snoozing just beneath the surface. 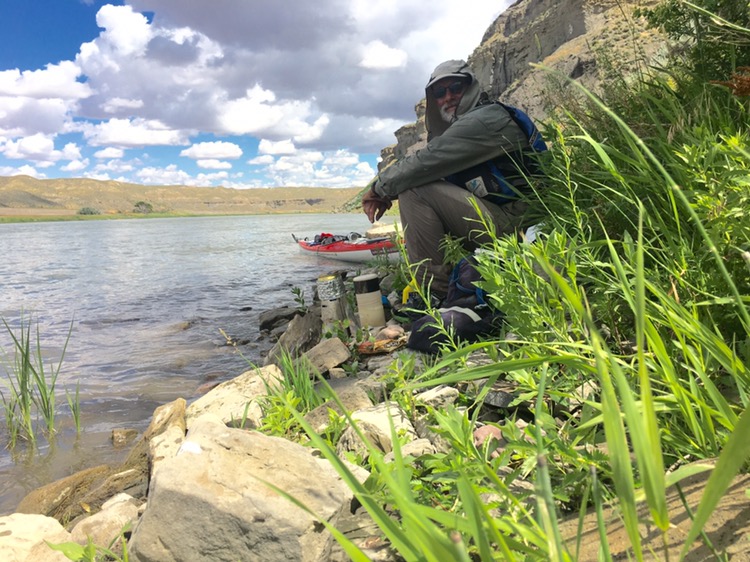 I saw another dead hawk. This one dead at least a week. It looked like another young drowned bird.

It was another day of pulling for considerable distances, getting in and out of the kayak over and over. I was reminded more than once to make sure the bow was square into the current before launching or the river would quickly swing me around as I paddled madly on the right side, being quickly swept downstream, stomping full left rudder until I was straightened out again. 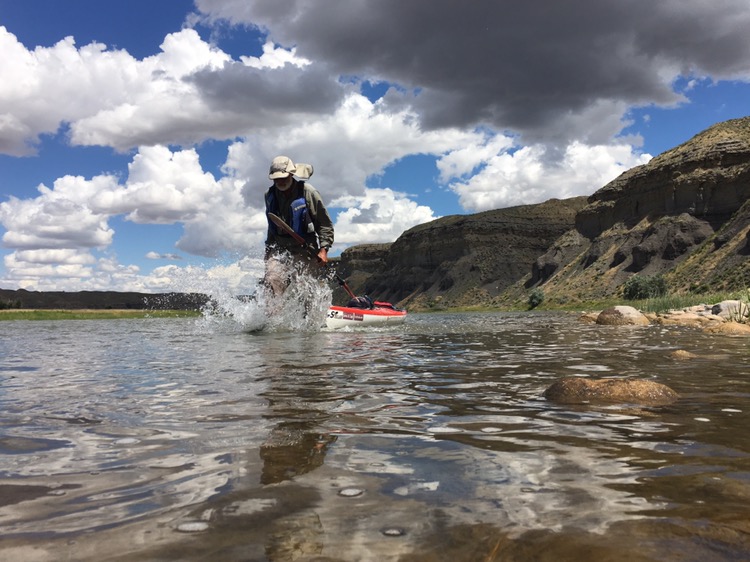 It was a very unusual day in that I stayed on river right, my left, all day.

True, I started late and only paddled until about 6 pm, but I’m still amazed I made only 11 miles. That was the plan though, today and tomorrow would be short so I could start the Great Falls portage early in the morning of Day 3.

When I walked down to the river to pick up my solar charger and phone I looked up and was suddenly struck by a nostalgia for what still is but what is destined to become a memory: the sun glinting off the rushing Missouri River, birds singing and the gurgling of the rapids, summer clouds in a blue sky, wind rustling the willows and cottonwoods, the scent of the river and wildflowers, the contours of the rugged bluffs in the low evening sun, the end of another day on a big adventure. Colter

NOTE: This is my second post of the day.

Clark: June 14th Friday 1805 a fine morning, the Indian woman complaining all night & excessively bad this morning—her case is Somewhat dangerous—two men with the Tooth ake 2 with Turners, & one man with a Tumor & Slight fever passed the Camp Capt. Lewis made the 1st night at which place he had left part of two bear their skins &c three men with Turners went on shore and Staycd out all night one of them killed 2 buffalow, a part of which we made use of for brackfast, the Current excesevely rapid more So as we assend we find great difficuelty in getting the Perogue & Canoes up in Safety, Canoes take in water frequently, at 4 oClock this evening Jo. Fields returned from Capt. Lewis with a letter for me, Capt Lewis dates his letter from the Great falls of the Missouri, which Fields informs me is about 20 miles in advance & about 10 miles above the place I left the river the time I was up last week Capt. L. informs that those falls; in part answer the discription given of them by the Indians, much higher the Eagles nest which they describe is there, from those Signs he is Convinced of this being the river the Indians call the Missouri, he intends examineing the river above untill my arrival at a point from which we can make a portage, which he is apprehensive will be at least 5 miles & both above & below there is Several Small pitches, & Swift troubled water we made only 10 miles to day and Camped on the Lard Side, much hard Slate in the Clifts & but a Small quantity of timber.