Dawn was reddening when I looked outside. I noticed a wood tick on the screen. When I looked around I saw another one and another one. There must’ve been a half a dozen visible. 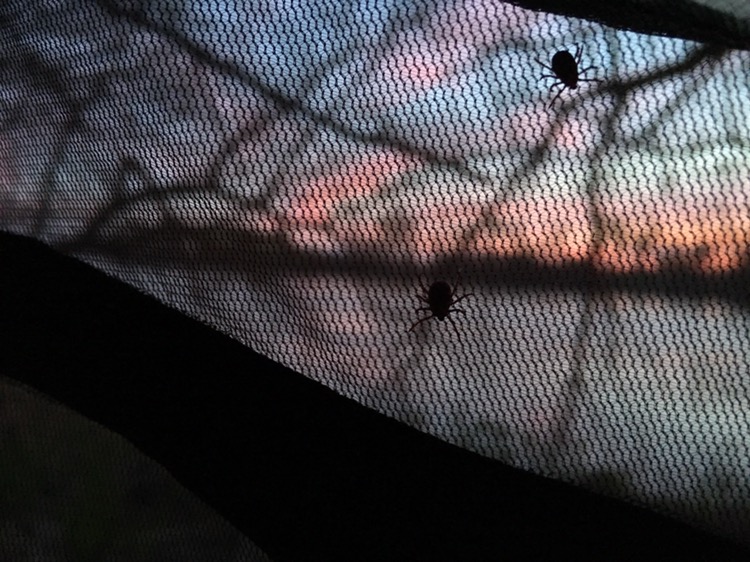 I have another ultralight shelter in which there is screen going down to the ground, but the floor is open. In my opinion that’s an extremely silly design. For a few more ounces, you can prevent the wood ticks from crawling underneath as well as ants and various other crawling insects. Happily this shelter is fully enclosed or I would’ve had wood ticks inside for sure.

I believe this was the most pleasant morning since the Katy Trail. There was almost no traffic and for a long way I walked along the river, it was cool calm and beautiful. 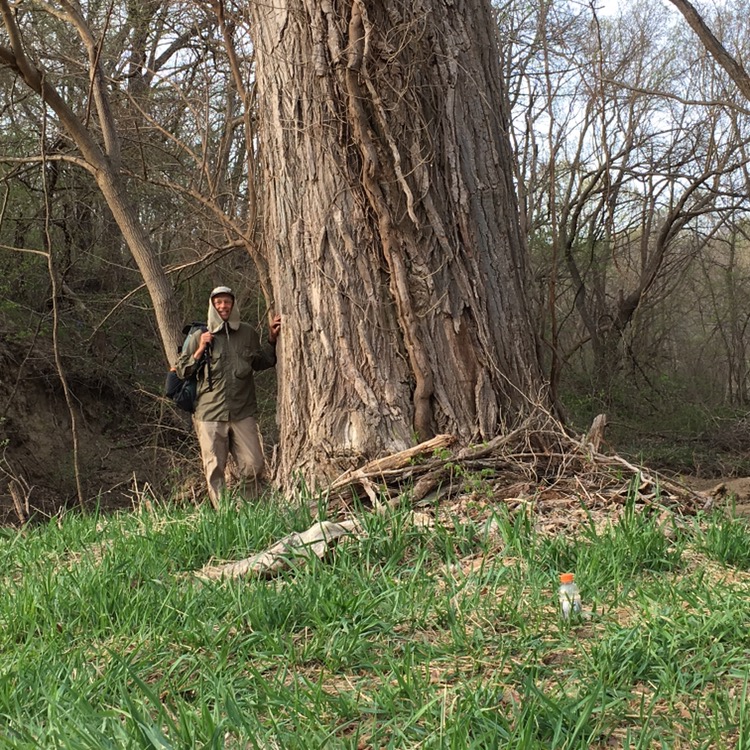 I reached the border of Nebraska. As always I’m delighted to walk into a new state, but I was sorry to see Kansas go; it was two, short, fun days. 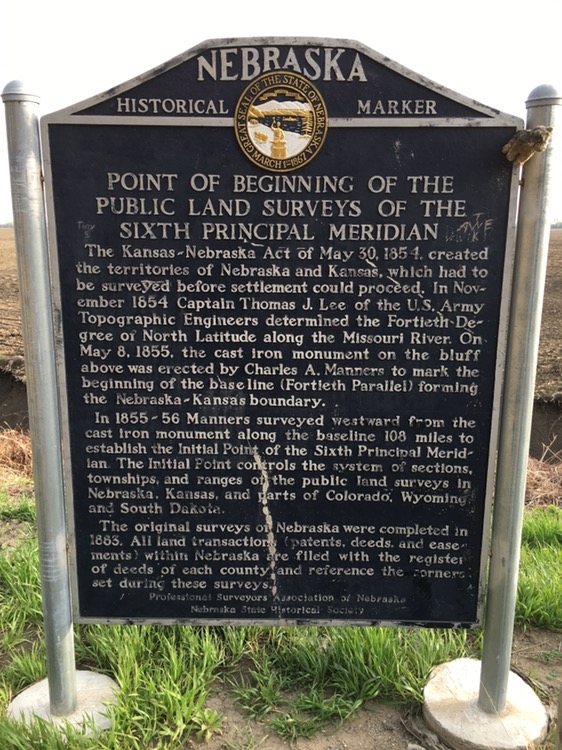 Today two rooster pheasants flew up from nearby, an invasive species that most people, including myself, are happy with. A wild turkey also flew up and disappeared. Yesterday I saw one take off and it may have flown over the Missouri River after disappearing behind the trees. It’s amazing how well such a large bird can fly.

I walked along the Rulo levee which was even more like the Katy Trail.  I had the whole world to myself.

Rulo has seen better days. Whatever it had been relying on economically, presumably river trade of some kind, has changed, many houses are gone many others are falling into disrepair. I saw an open bar and asked a couple people going inside if they serve burgers, and they said they did.

I looked over the menu and in a spirit of adventure I ordered the carp basket. Undoubtedly carp can be prepared so it is good. Those things were not done to this carp. This carp tasted like you’d expect a carp to taste. Even the fries failed to meet my very low standards. Still it was good to get off my feet and get a hot meal.

Farmers have been planting like mad the last few days in Missouri and Kansas and Nebraska, using giant planters, the likes of which I never saw as a kid growing up on a Minnesota farm.

It was about 9 miles to Fall City so I decided to walk an hour at a time, in other words, 3 miles at a shot. I had just reached my mile marker where I would get my break when a sheriff’s car pulled up. The deputy introduced himself professionally.

“We got a report of a man in camo in a ditch with a gun,” he said. “Would that of been you down the road a few miles about an hour ago?”

“I was taking a break in the ditch exactly an hour ago.” I said. “I’m sure that was me they reported. Some people have active imaginations.”

“Yeah,” he said “no camo and no gun.” Unlike the Missouri Trooper, he knew this was the Lewis and Clark Trail and clearly knew there was nothing going on, but he still called in my license, apparently S.O.P. He made small talk. A good guy.

But for every busybody worry-wart who sees snipers in the ditch, there are 1000 nice people. At that very break spot a car pulled over just to ask if I needed anything. After the cop check somebody pulled over to ask if I wanted a ride. When I got to the edge of Fall City a lady pulled over and said there is a great camp spot, the State Park by the lake. Later she saw me at the burger place and said she’d give me a ride over there. That was awfully nice of her, but I’d already decided that I wanted to get my laundry done and to get a good shower and to kick it in a motel tonight.

I checked my route and made my best guess as to where I can resupply next, then stopped at the grocery store and bought about two days worth of stuff.  Buck aka Colter

“I went on Shore, & passed thro the plain passed Several noles to the top of a high artificial Noal from the top of this noal I had an emence, extensive & pleaseing prospect, of the Countrey around, I could See the meandering of the Little River for at least 10 miles winding thro a meadow of 15 or 20000 acres of high bottom land covered with Grass about 41/ 2 feet high, the high lands which rose irregularly, & were toped with Mounds or antent Graves which is to me a Strong evidence of this Countrey haveing been thickly Settled-.

…on the side of a clift Sand Stone 1/ 2 me. up & on Lower Side I marked my name & day of the month near an Indian Mark or Image of animals & a boat Tried Willard for Sleeping on his post, our hunters killed some Deer, Saw Elk & Buffalow.”

[note, I passed this spot but did I don’t know if Clarks name has been found. Archaeology had shown that he was right that the land had once been thickly settled.]