Early in the morning I heard a thump outside my tent, a jumping mule deer. I slowly stuck my head out and saw a mule deer buck and doe walking across the hillside.

The wind was giving me a break early on, with another orange sunrise. The low morning light made the relief of the brown basalt cliffs even more dramatic. This has definitely been one of the most scenic stretches of the Lewis and Clark Trail.

As I approached Lower Monumental Dam a big tour boat was just coming out of the lock. At the boat ramp I put the cart on and wassoon rolling along the road. I couldn’t find a very good way back down to the river but finally wheeled between two boulders and over some smaller rocks to the water.

I stopped to eat some blackberries and later spotted a huge dead sturgeon that must have been nearly 5 feet long.

I rounded the corner and spotted the dock for Windust Park where I was going to get water. A guy sat on the dock with two chairs and two beers. It was Rod Dow, one of my old smokejumper buddies. I was truly surprised. I’d had no idea he was coming.

Rod brought me ice cream, a cheeseburger, peaches and a list of food far to long to mention, with a whole bunch of food to send with me as well.

We drove into Kahlotus for dinner and so I could access Wifi to update my journal.

There was some epic story telling that afternoon and evening, although at one point he claimed I was telling one of HIS stories. Regardless it was a genuinely good time. We smokejumped together for twenty years. Thank you Rod! 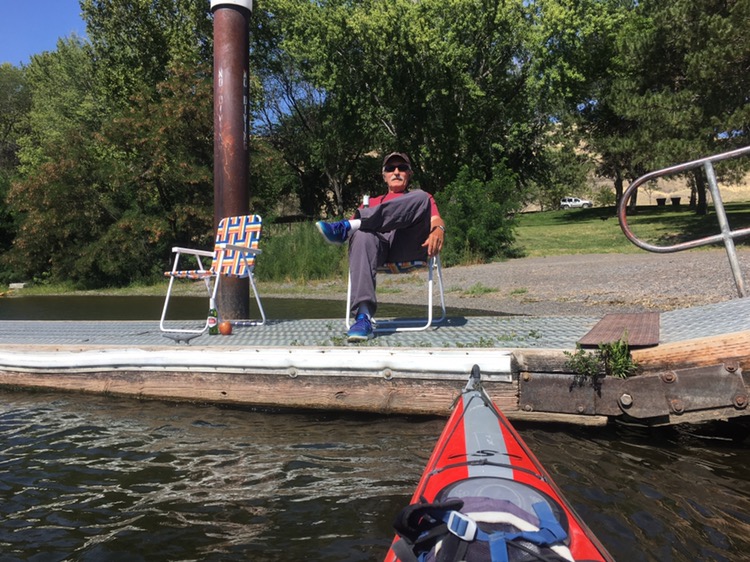 Barge headed up the Snake River

I got an early start, hoping to make it to Pasco today. The basalt bluffs continued but as the day progressed the were getting lower in places and in others moving farther from the river.

Orchards were now visible, along with more irrigation. I heard some workers yelling back and forth and the sound of loud Spanish music.

A barge went by. I’m surprised, though, at how little barge traffic I’ve seen on the Snake. There seems to be a lot more stuff moving along the railroad track that is usually closely following the river.

I seemed to be sponging out more water than usual. Each time I get in and out of the boat considerable water runs off my pants and shoes. I was slightly concerned that the crack from below Great Falls had split again, despite my faith in the epoxy repair. I found a gravel bar and flipped the boat over. The crack had broken open. That was dispiriting. I had more epoxy, but a repair should cure at least 12 hours, preferably 24. If I had only noticed yesterday when I’d taken most of a sunny day off!

I found a better landing place and flipped the boat over to dry in the sun. Luckily there was great blackberry picking there. When the boat was dry I got out my roll of white duct tape and made a temporary repair. When I launched I made sure not to drag that part of the boat on the river bottom.

When I got to Charbonneau Park it was still only about 2 PM but I’d already come 27 miles. I decided to do the repair here, cutting short my big day.
It took a while to figure out where I should or could camp. I unloaded my kayak and set it up on a picnic table, mixing the epoxy before making the best repair I could, inside and out.

There was a weak cell signal but I still managed to get through to my parents to wish my Dad a happy birthday.

My campsite was in a quiet corner of the campground. I was tired and fell asleep early.

Clark: October 14th Monday 1805 a verry Cool morning wind from the West Set out at 8 oClock proceeded on at this rapid the Canoe a Stern Steared by drewyer Struck a rock turned the men got out on a rock the Stern of the Canoe took in water and She Sunk the men on the rock hel her, a number of articles floated all that Could be Cought were taken by 2 of the othr Canoes, Great many articles lost among other things 2 of the mens beding Shot pouches Tomahaws &c. &c. and every article wet of which we have great Cause to lament as all our loose Powder two Canisters, all our roots prepared in the Indian way, and one half of our goods, fortunately the lead canisters which was in the canoe was tied down…