Wind and Caves and History

I start walking just about the time it was light enough to see. I mixed up some cold coffee in a bottle. It’s a Korean coffee mix, “Maxim” which came highly recommended. It’s good stuff, when I remember to make it.

The trail ran near the river for miles, which is something I enjoy. 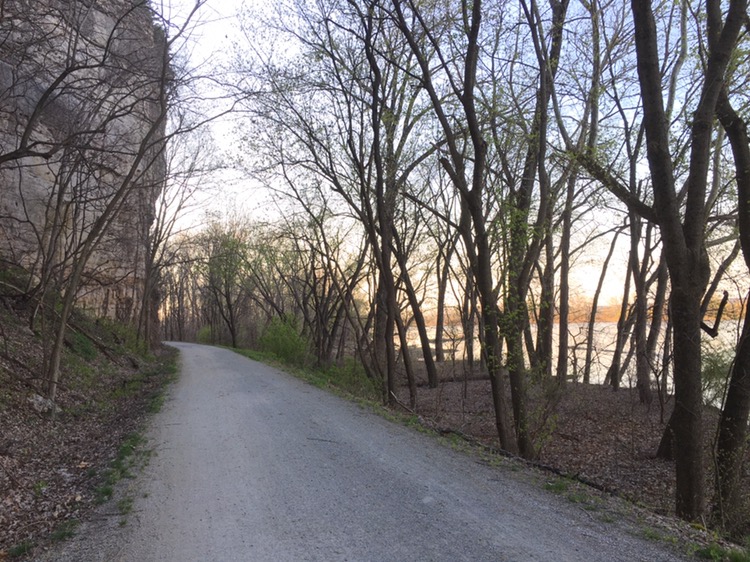 Wednesday the 6th of June 1804…Some wind in the after part of to day from the S E, (the Banks are falling in greatly in this part of the river) as also is one Side or the other in all the Course, we assended on the North Side of the Isd. and finding that the perogues Could not Keep up Camped 2 hs. by Sun. on the Sd Sd the land below this is good…Some buffalow Sign to day I am Still verry unwell with a Sore throat & head ake

Right next to the trail was a cave with a brook running out of it, a cave seen by the Corps. 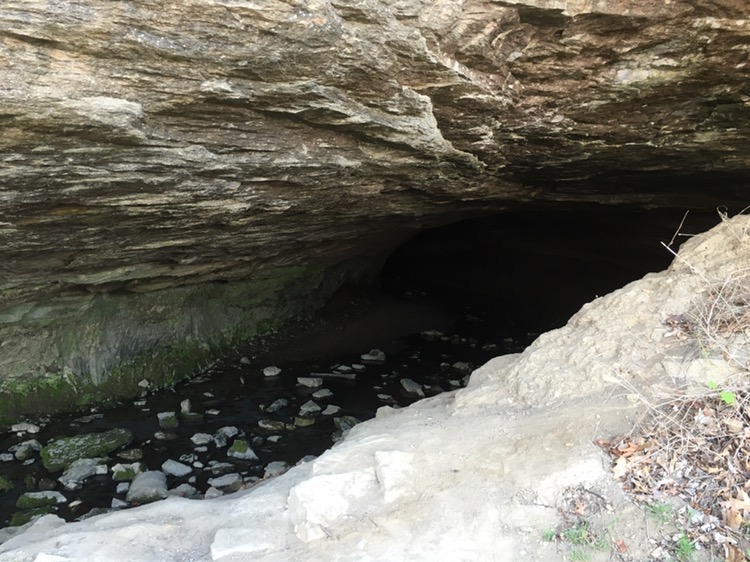 came 2 miles past Som springs Comes out of the clifte.

The Rocheport General Store appeared to be out of business. I couldn’t find any eateries open either. Instead I munched on some leftover hot dog buns.

The trail passed through a a scenic tunnel. I ran into a couple of super friendly middle aged bicyclists. 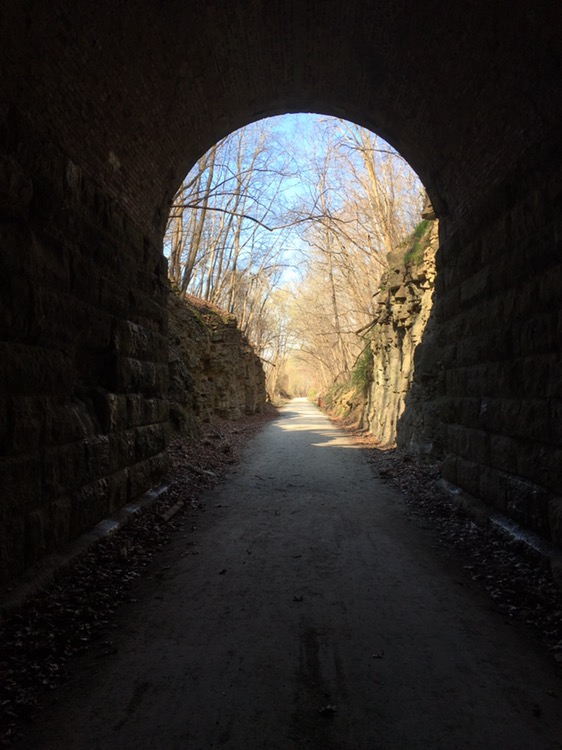 “Are you on a long journey,  or preparing for one?” the lady said, excited for the answer. Commonly people can’t relate, or don’t care, perfectly acceptable attitudes.  They could relate, and they were enthusiastic. It was fun.

It was shortly after they left, however, that the day went from a scenic spring walk to a windy slog. There were numerous other bicyclists out on this Sunday. Before though, it seemed the majority of bikers (mostly appearing on weekends) wore all the “official” gear, many part of small groups. Today there seemed to be mostly couples or friends, wearing their everyday clothes. And a significant percentage seemed to be grimly pedaling to get the ride over with.

I had grown so accustomed to happily following the Katy Trail that I failed to follow my own alternate route near Boonville, one that would have saved me about two miles of buffeting and at least some sand in the teeth.

I was however, now on the route of the Santa Fe Trail, which I followed on my first crossing of the Missouri River. It was so freaking windy on the bridge I was afraid my iPhone/camera would be torn out of my hands and I had to hold onto my hat, and grasp loose straps to keep from getting painfully whipped in the face. 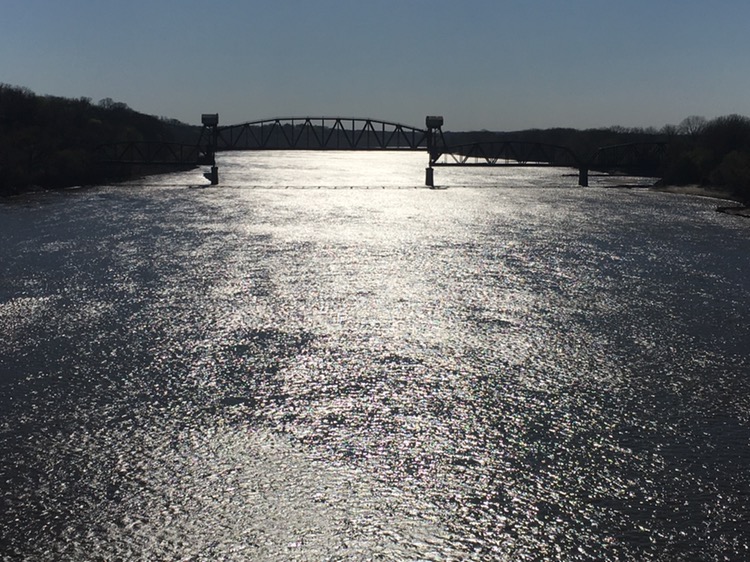 The enthusiastic couple recommended the Hotel Frederick. I was going to throw frugality to the wind and stay there, handily on the trail,  but it turned out they were booked. My second choice for lodging said the Casino would give me a ride to their place. When I asked the (on trail) Casino at 4:59 when the next hourly shuttle was, they said 5:00. I ran outside but it had left early. The valet lady was awesome. I was smitten by her sense of duty and hustle. She was a whirlwind of motion and problem solving, and tried to get the shuttle to give me an early shuttle. Me, I wanted to get out of the wind and my shoes.

Finally I was at my room. I got a hot bath and two cheeseburgers and a salad. I also made the decision to take my first “zero” day. As in zero miles. Monday would be a day to rest my feet from the hard-packed trail.

Along the Katy Trail 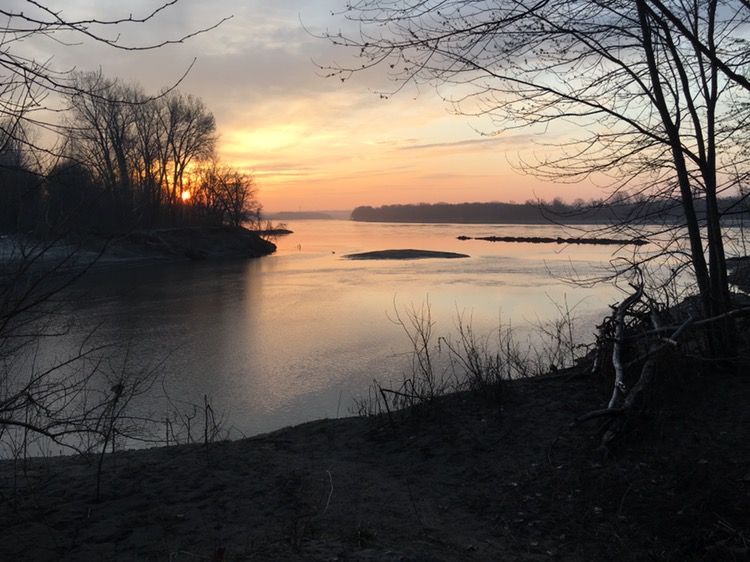 I had the trail to myself when I started walking. People in nearby farmhouses were still sleeping. Birds flitted and sang, squirrels scampered.

I saw a place where beavers had been cutting trees during the spring floods. That’s assuming there aren’t 10 foot tall beavers around.

St Charles was a beautiful town. The trail ran near the river past brick homes built in the 1800s. I began to see bicyclists enjoying the trail.

I saw a number of red birds, some cardinals, and what looked to be, perhaps, scarlett tanagers. Binos would have helped.

In places the trail ran next to the river where big cottonwoods grow and where annual spring floodwaters have only recently receded. In others it crossed fields, a pleasant variety in scenery. This has been one of the flattest sections of trail I’ve hiked.

My feet were aching by the end of the day, which is to be expected this early in the hike. I did about twenty miles. My pack is so light, maybe  15 pounds with food and water, that my shoulders barely notice it.

I found a nice spot for camping, near the river on dry sand dotted with fox and deer tracks, with many cottonwoods ringed by beaver. I made sure to pick a spot where a dead trees or branches wouldn’t hit me. It was a warm, dry, comfortable camp. 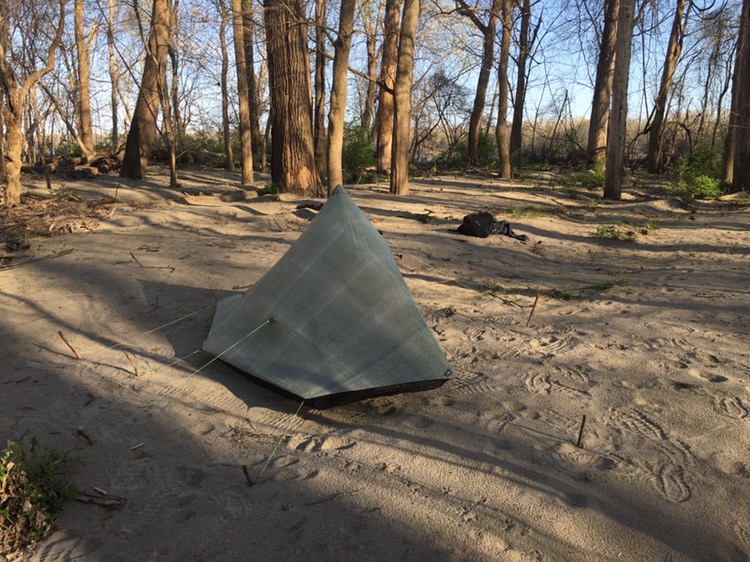 Lewis May 20, 1804 …we set forward to that village [St Charles] in order to join my friend companion and fellow labourer Capt. William Clark who had previously arrived at that place with the party destined for the discovery of the interior of the continent of North America…[young men of St Charles] are frequently absent from their families or homes the term of six twelve or eighteen months and alwas subjected to severe and incessant labour, exposed to the ferosity of the lawless savages, the vicissitudes of weather and climate, and dependant on chance or accident alone for food, raiment or relief in the event of malady. 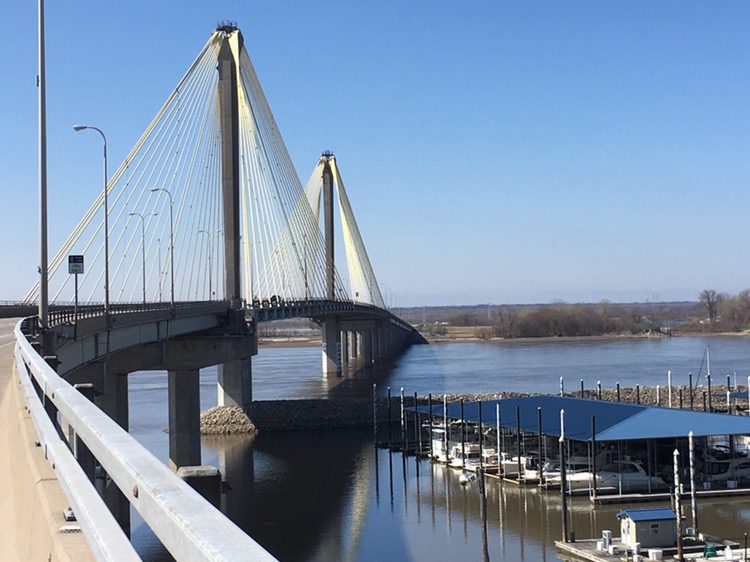 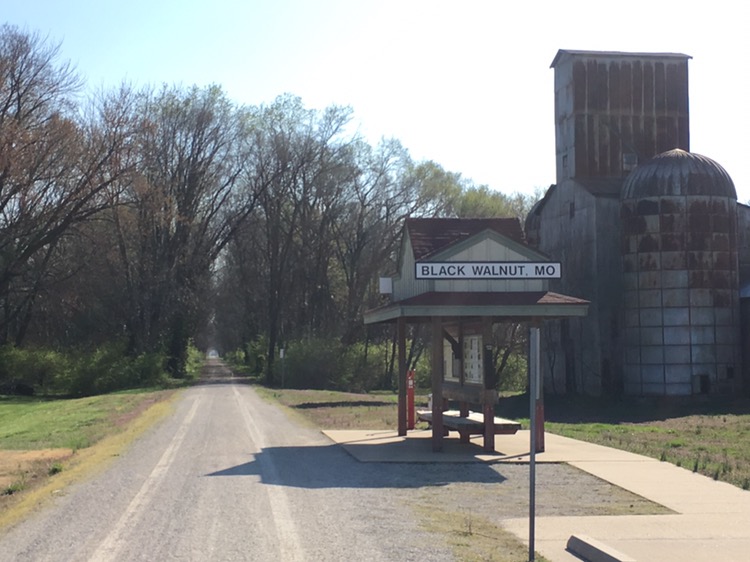