A pretty good lightning storm passed nearby last night but I didn’t get much rain and only moderate wind.

Yesterday I did about 26 miles. I’m pleased it’s going this well in the current. There will be tough paddling ahead but I’ll just keep doing as many miles as a reasonably can.

I stopped on a break to get cleaned up a little bit, including laundering my shirt, in preparation for going into Culbertson for resupply.

I was watching for Kris Laurie who is paddling down to Missouri. I’ve been told I’d likely see him in the Culbertson area. When I came around the corner I thought I spotted a person on the shore way up ahead. When I saw two more people and then their boat I knew it was Kris and his brother and nephew.

They knew I was coming up the river so it was no surprise for them to see me either. In all this paddling I didn’t have one picture of me on the water so I had to get my camera out and he was nice enough to take a couple of shots. 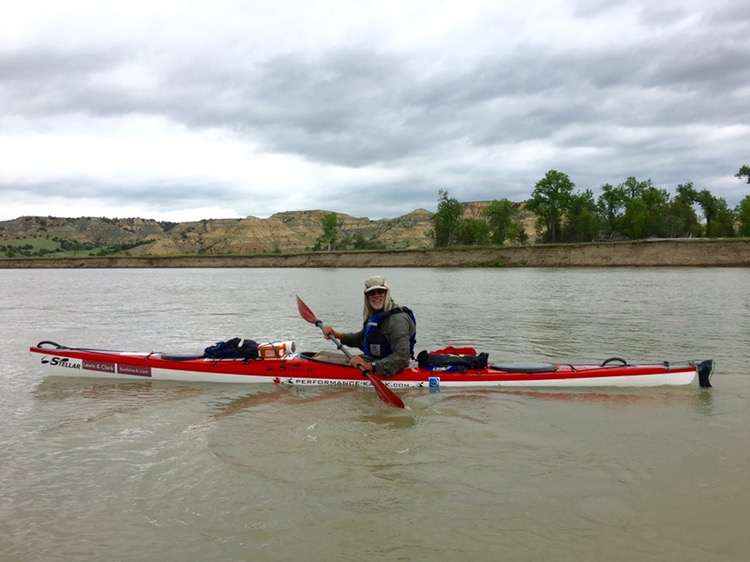 First photo of me on the water!

We had a great time comparing notes and telling paddling stories, talking about people we had met along the way and people in the paddling world. It was really fun hanging out with kindred spirits for a while. The fellowship is fun on long distance hikes and it’s something that has been almost entirely missing on the three months of this trip so far. Kris started out in a canoe, and was currently paddling a kayak he had built,  and then he’ll be switching back to his canoe when his brother and nephew leave in Williston. 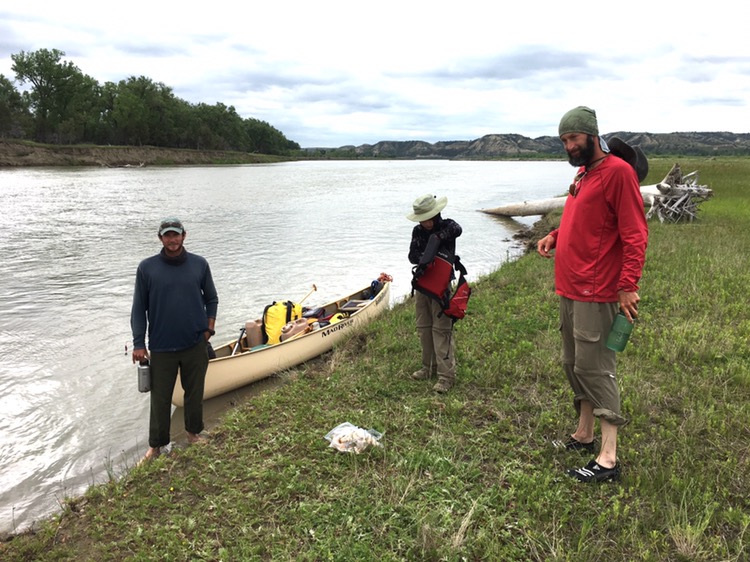 We wished each other well and headed our respective ways. The Culbertson bridge was just around the corner. I landed short of the bridge where there was a nice hiding place for my kayak, and then stepped out into shin deep mud.

After sorting out my garbage to throw away in town and bringing my empty water containers I grabbed my pack, washed off my feet and legs, and started to walk into town.

It was fun seeing the river from up high. It was about a 2 mile walk to the edge of Culbertson on a fairly hot day. I first headed to the pizza place and ordered the Tuesday special, two large one topping pizzas for $20. While they were making them I headed to the post office and mailed off several unneeded items. When I got back they were just putting the first pizza on my table. I easily polished it off. The manager who is a great lady wrapped up the second pizza in nice foil servings.

Over at the little grocery store I walked the aisles and got what I needed. I figured I needed about seven days or a bit more to get to Fort Peck which is my next resupply. Everyone in Culbertson was very friendly.

My pack was considerably heavier on the way back with 6 quarts of water and all my groceries. Round-trip I think I put in about 7 miles. 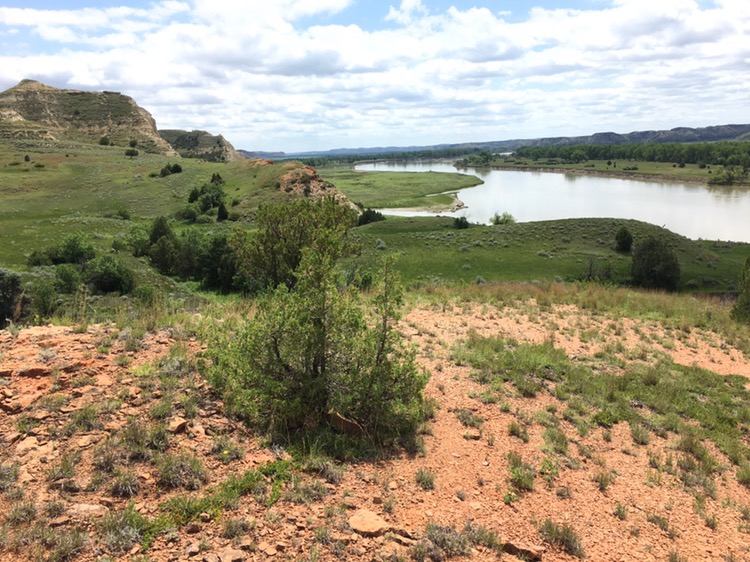 Right now I’m back on the river and I’m going to put in as many miles as I reasonably can yet today. Since coverage is spotty I’m going to send this while I can. Colter

Clark : 29th of April Monday 1805 Set out this morning at the usial hour. the wind is moderate & from the N E had not proceeded far eer we Saw a female & her faun of the Bighorn animal on the top of a Bluff lying, the noise we made allarmed them and they came down on the Side of the bluff which had but little Slope being nearly purpindicular, I directed two men to kill those anamals, one went on the top and the other man near the water they had two Shots at the doe while in motion without effect, Those animals run & Skiped about with great ease on this declivity & appeared to prefur it to the leavel bottom or plain. Capt Lewis & one man walkd on Shore and he killed a yellow Bear…