The campground was asleep as I packed up. I filled all my water containers and loaded the boat.

I had a 3 mile portage ahead of me, mostly uphill. Once again I loaded the boat putting most weight towards the stern to nearly balance the weight over the cart wheels. I looked high and low for the skid plate I had made that protected the stern of the boat from scraping on the road if I lifted the front too high, but it had disappeared mysteriously. I made another out of a plastic bottle.

It was a pretty morning, mild and with fog lying over low areas.   I love the morning light.

The cart pulled remarkably easy, the grade was gentle and the road paved. With only brief breaks I marched steadily up the road switching hands from time to time. 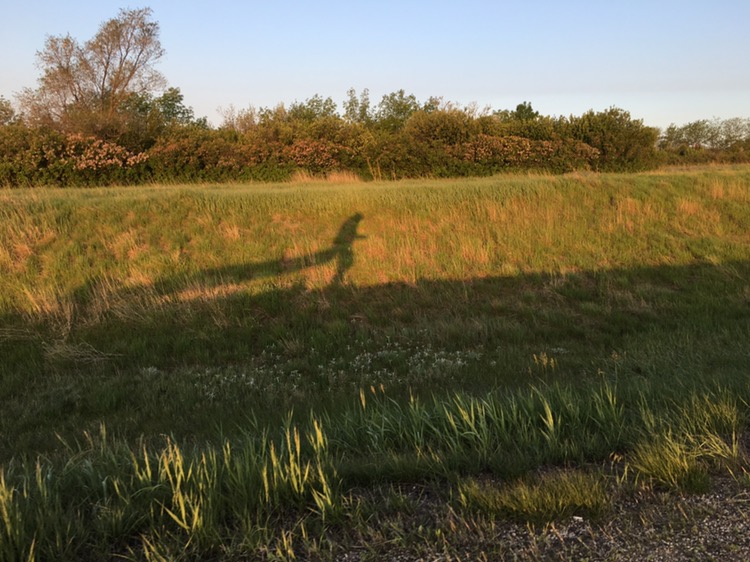 At the top there was an interesting historical sign, telling of some of the early traders in the area and the Indian fortresses that existed and the passing of Lewis and Clark.
It was an easy downhill walk to the boat ramp. I reloaded the boat with the weight evenly distributed front and back. Once again I checked the predicted winds and consulted the map. With mostly southeast winds predicted, picking up in the afternoon, and similar stronger winds tomorrow I bee-lined for the end of the first point across the lake, planning to stay near the east shore.

After that first long crossing I spent most of the day paddling hard for an hour and then taking a brief rest before continuing on. Today for the first time I saw lots of deer in mid day, mostly if not all mule deer.

Lake Oahe has the reputation of being the toughest lake on the Missouri, often with strong strong winds building into big waves. Good judgment at all times is necessary. I added several miles today to limit my open water crossings. Still I crossed numerous mile-wide side bays that I would not have a crossed in a higher winds.

I expected the winds might come up later in the day to stop me cold, so every time I turned a corner it was a small victory. Late in the day I studied the map again and it looked as if I might be able to make Little Bend by the end of the day, much greater progress than I had hoped for.

At the end of the day the wind was coming up. With my route turning more westward I had to fight to keep the boat straight in the angled waves. Now I was staying near shore to hedge my safety bets.

I was looking for the Little Bend boat ramp but I could not see it yet and I had one more point to go around, a point I wasn’t going to attempt in the rising waves. I looked ahead for potential camp spot in the bay I was in. I saw a nice wide,  low, thick cedar tree that I could camp behind escape the wind. I headed straight for it and now all I had to contend with was landing in waves breaking on the shore.  It was no surprise I got a little wet with waves splashing over the boat but it was no serious problem.

I carried some of my gear up to the tree and then put on the kayak cart and wheeled the boat and the remaining supplies right to camp.

It was flat and grassy downwind of the tree, which did a remarkable job of blocking the wind.

This was one of the toughest days of the trip, near 40 miles, and it was glorious to crawl into my tent for a good rest. There was the smell of sage, a scent I associate with many great adventures.

With strong winds coming up for the next three days or so, making it to Little Bend will allow me to make some small progress where I would likely have been stuck otherwise. Now tomorrow I can at least do the portage across Little Bend, and perhaps even paddle a short distance on the lee shore. Colter

Clark: 25th of September…raised a Flagg Staff and formed an orning & Shade on a Sand bar…we invited those Chiefs & a Soldier on board our boat, and Showed them many Curiossites, which they were much Surprised…as Soon as I landed 3 of their young ment Seased the Cable of the Perogue, one Soldiar Huged the mast and the 2d Chief was exceedingly insolent both in words and justures to me declareing I Should no go off, Saying he had not recived presents Suffient from us-I attempted to passify but it had a contrary effect for his insults became So personal and his intentions evident to do me injurey, I Drew my Sword at this motion Capt Louis ordered all in the boat under arms, the fiew men that was with me haveing previously taken up their guns with a full deturmination to defend me if possible—The grand Chief then took hold of the Cable & Sent all the young men off, the Soldier got out of the perogue and the 2nd Chief walked off to the Party at about 20 yards back, all of which had their bows Strung & guns Cocked…we proceeded on abot a Mile, and anchored near a Small Island, I call this Island Bad humered Island…

26th of Septr…Set out early and proceeded on—the river lined with indians…I was in Several Lodges neetly formed, those lodges are about 15 to 20 feet Diametr Stretched on Poles like a Sugar Loaf…We Smoked untill Dark, at which time all was cleared away & a large fire made in the Center, Several men with Tamborens highly Decorated with Der & Cabra Hoofs to make them rattle, assembled and began to Sing & Beat—The women Came forward highly decerated with the Scalps & Trofies of war of their fathes Husbands & relations, and Danced the war Dance, which they done with great chearfulness untill 12 oClock…I saw 25 Squars & Boys taken 13 days ago in a battle with the Mahars, in which they destroyed 40 Lodges, Killed 75 men & boys, & took 48 prisones…