It is helpful when traveling to have a high threshold for embarrassment. After all, you don’t know the ropes, and locals  may be amused at your befuddlement of things they may have understood since childhood.

I took the Skytrain to the airport in Bangkok on the 22nd. The ticket booth didn’t give me a ticket as one might expect when I asked for fare to the airport. She just gave me 37 baht in coins. I noticed a nearby machine and fed in 37 baht for which I received a subway card. I couldn’t figure out which way to feed the card or even WHERE to feed the card so I used the old standby technique of watching other people. Unfortunately I got behind an older Thai lady who was flustered herself. When I finally figured it out on my own she rushed through on MY ticket and I was stuck on the wrong side. The amused lady in the ticket booth pointed to the bypass gate.

Like most modern public transportation of it’s kind, once I was through the gate it was pretty easy with clear maps and station announcements. It was easier buying a token when I got the the Airport Link train. This time it was a train token. At the turn-style there was no slot so I was again baffled. Apparently lots of people are baffled because there was someone standing right there indicating how it was done. You had to touch this big button thing. She burst out laughing when I did, indicating that you have to touch the TOKEN to the button.

On the plane I sat next to a UNESCO ruins expert on his way to consult with the Angkor Wat people. When we landed at Siem Reap I filled out the forms, and paid my $20 entry fee. Then my passport, along with everyone else’s was handed along a line of at least a half dozen people. At the other end a young lady would attempt to pronounce your name, holding up your passport. I retrieved mine and outside a fellow stood with a sign with my name on it. Pretty swell treatment for a $11 a night establishment. He whisked me to the hotel in his tuk tuk, which is a motorcyle drawn cart. 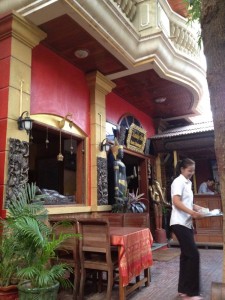 My hotel is a great place with a very friendly staff, clean and shady. The main waitress is really sweet.

After settling in I enjoyed a good meal. The highlight was a bowl of mixed fruit including lime, banana, dragon fruit, mango, watermelon, and a type of lychee, and that’s just the kinds I remember! I walked around town for a bit and bought some more fruit at the old market. In the afternoon I rented a bike from the hotel.

After breakfast I rode out of town not long after dawn. The traffic is pretty crazy in town, but not too fast and the cars are very accustomed to bikes so it wasn’t too tough to get on the road to Angkor Wat. I bought a pass good for any three days of the next week and peddled on to the ruins. At each stop I was approached coming or going,  mainly by children, but everyone with something for sale. Unlike some places it wasn’t particularly unpleasant. No one seemed starving or desperate or surly, just trying to make a sale with a smile on their face. Most had well-polished routines. One young lady had a selection of just about everything:

“What you want buy?” 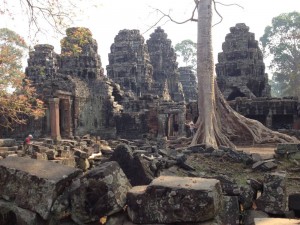 The ruins are spread out over many miles and I spent the rest of the day riding from ruin to ruin. Luckily I had a good guidebook. What an incredible effort it must have constructing  the many complexes. More stone was used than in all the pyramids of  Egypt.

For lunch I stopped to buy some food cooked in banana leaves. It was some type of sweet rice. Don’t know what it was called, but it was good!

As the day wore on it got warmer and then hotter. Luckily there was plenty of water for sale along the way because my 1.5 liters had run dry. Also, much of the route was shaded as were many places in the ruins.

At some of the lesser ruins there were very few people, but when I passed Phnom Bakheng late in the day there was a HUGE crowd of people, tuk tuks, minivans, cars, motorcycles and bikes. I really got fooled by how fast the sun set. I’d planned to be at the main temple of Angkor Wat for sunset but was too late. Luckily, I have plenty of time in coming days. 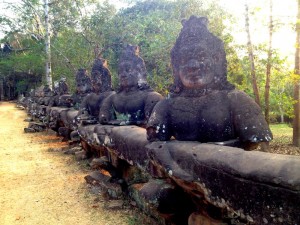 I ate some barbecued fish at a roadside stand while waiting for traffic to recede, then rode my bike back in the dark. It had a light and I put a light on the back as well  just to be safe. I saw locals riding without lights of any kind, not something I’d care to do.

It was a long day of maybe 25 miles or so of  riding and walking and exploring, but one of my best days traveling ever.