Bruce Ford whipped up eggs and sausage and I started a pot of strong coffee. Next stop was the grocery store for supplies to last to Wieppe.

On the way out of town we swung into a grocery store where I also bought some bottled water that Steve Baker will cache in dry sections ahead of me.

It was about 9 when I started walking up the gentle slope towards Lolo Pass. All day long Lolo Creek was on my left. That’s good for melting ice off the road in the winter, but made for some hot walking in the sun.

I’d just reached Lolo Hot Springs, 20 miles, when Bruce drove up in his pickup. We sat on his tailgate in the shade and ate sub sandwiches he brought. An hour later Steve Baker rolled up on his motorcycle.  It was great to see him.

We headed up a logging road and found a good camping spot. Needless to say it was really fun to be hanging out with smokejumper bros and telling stories, old and new. I can confidently state that my IQ is about 40 points lower than either of them. One, for example, is working on mathematically confirming quantum mechanics. The other is a PHD-DVM and musical genius. I walk and paddle. Colter 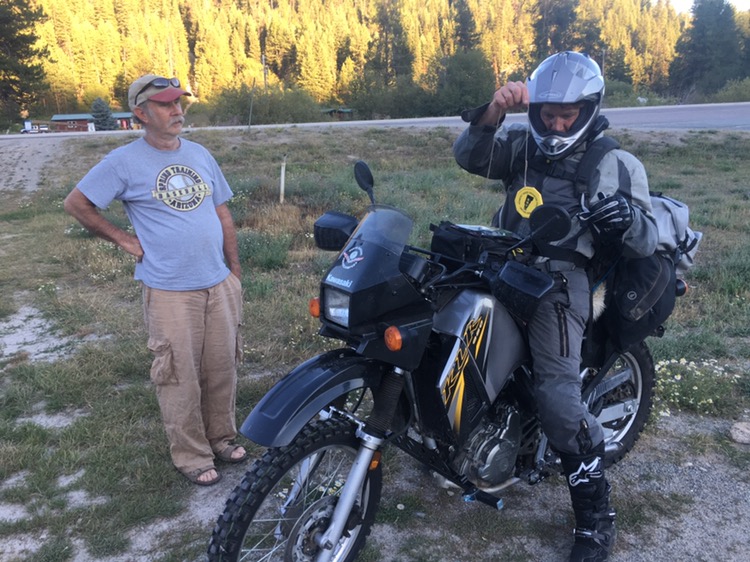 Clark: September 11th Wednesday 1805 A fair morning wind from the N W we Set out at 3 oClock and proceeded on up the Travelers rest Creek, accompanied by the flat head or Tushapaws Indians about 7 miles below this Creek a large fork comes in from the right and heads up against the waters of the Missouri below the Three forks, this river has extensive Vallies of open leavel land, “and passes in its Whole Course thro a Valie” they call it our Guide tels us a fine large roade passes up this river to the Missouri—The loss of 2 of our horses detained us util. 3 oClock. P.M. our Flathead Indian being restless thought proper to leave us and proceed on alone, Sent out the hunters to hunt in advance as usial. (we have Selected 4 of the best hunters to go in advance to hunt for the party. This arrangement has been made long sinc) we Proceeded on up the Creek on the right Side thro a narrow valie and good road for 7 miles and Encamped at Some old Indian Lodges, nothing killed this evening hills on the right high & ruged, the mountains on the left high & Covered with Snow…

Last night I slept under the stars and when I awoke about 1 AM I stayed up for a while to watch the meteor show. I am a big believer in keeping it positive but that was a lousy show. 🙂 I only saw about a half dozen mediocre streaks in maybe 45 minutes, nothing like the amazing, unforgettable Leonid shower I saw in 2001-ish. This one likely got better but I fell asleep again.

Nearly all day long I had a bike path to follow which was nice as the traffic was heavier as I moved farther north. The scenery was really pleasant, featuring the  Bitterroot Range. There were also some especially pretty horses: gray roans and paints, buckskins and more. 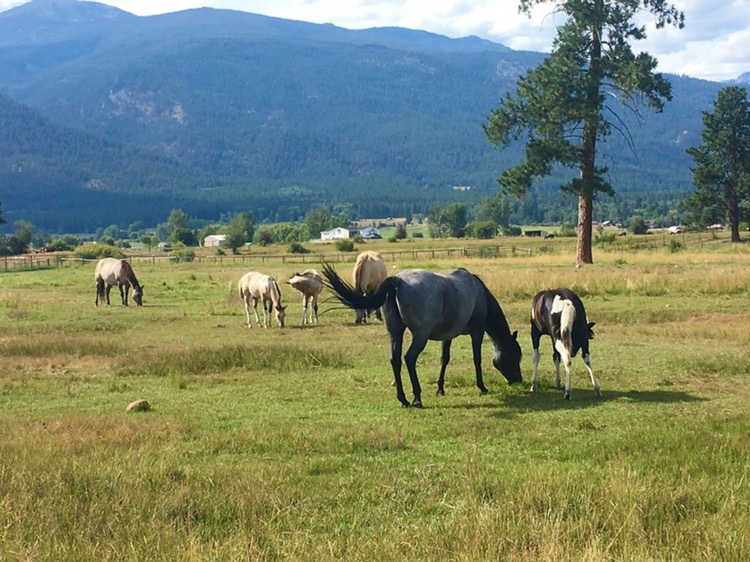 I saw what must have been the remains of the Roaring Lion Fire, plenty of smoke patches but no flame. Glad I was able to walk right through this area.

In Hamilton a guy walked over to talk to me. It was long time smokejumper Jeff Kindermann who jumped out of Missoula.  He knew I was hiking and happened to spot me. It was really fun catching up with him.

In Victor I found a cafe just 10 minutes before it closed, good thing since I’d been walking the last two hours looking for hot food.  I ordered a giant burger that must have been at least 4 inches tall, pre-squishing.

It was probably the hottest feeling afternoon in a week. Dave and Marty Hade texted me saying they were in the area. They drove up to see me and we had a good break in the shade while they gave me fruit and ice water and a pastry. It was a good day for seeing old smokejumper buddies.

Late in the day I found a nice hidden camp spot in some Ponderosas. Three whitetail deer watched me and snorted for twenty minutes. I walked about 23 miles today. Colter

Clark: September 8th Sunday 1805 a Cloudy morning Set out early and proceeded on through an open vallie for 23 miles… two of our hunters came up with us at 12 oClock with an Elk, & Buck—the wind from the N. W. & Cold. The foot of the Snow mountains approach the River on the left Side. Some Snow on The mountain to the right also proceeded on down the Vallie which is pore Stoney land and encamped on the right Side of the river a hard rain all the evening we are all Cold and wet. on this part of the river on the head of Clarks River I observe great quantities of a peculiar Sort of Prickly peare grow in Clusters ovel & about the Size of a Pigions egge with Strong Thorns which is So birded as to draw the Pear from the Cluster after penetrateing our feet. Drewyer killed a Deer. I killed a prarie fowl we found 2 mears and a Colt the mears were lame, we ventered to let our late purchase of horses loose to night

It was another pleasant, cool morning, and a nice walk between the Bitterroot Mountains and the river.

Trapper Peak was especially impressive, the highest mountain of the range. 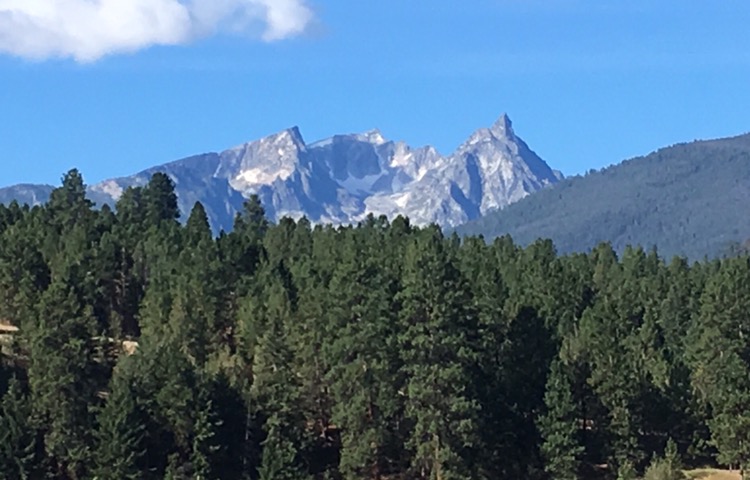 I stopped at a restaurant in Darby, with a very cheerful waitress. I had a Taco salad and she filled my water bottles for me.

Now that I had coverage I got caught up on email and talked to an old smokejumper buddy who lives in Missoula. He’ll meet me in a day or two.

I stopped at the grocery store but with occasional cafe meals along this section I didn’t need much to supplement my small food stock. I decided to get some ice cream. I could get a half gallon of the good stuff on sale for less than a pint. I sacrificed and went with the half gallon.

Late in the day I started looking for a good camp spot where I could watch for the Perseid meteor shower. I found a hidden grassy spot between the abandoned railroad next to the river and the half abandoned frontage road I’d been walking. I didn’t set up my tent. Instead I used the bug screen to keep the few mosquitos away until the meteor show started. Colter

Clark: September 7th Satturday 1805 A Cloudy & rainie Day the greater Part of the Day dark & Drisley we proceedd on down the river thro a Vallie passed Several Small Runs on the right & 3 creeks on the left The Vallie from 1 to 2 miles wide the Snow top mountains to our left, open hilley Countrey on the right. Saw 2 horses left by the Indians Those horses were as wild a Elk. One of our hunters Came up this morning without his horse, in the course of the night the horse broke loose & Cleared out—we did not make Camp untill dark, for the want of a good place, one of our hunters did not join us this evening. he haveing killed an elk packed his horses & could not overtake us.