After getting a hot breakfast I headed north out of Salmon. At the edge of town three big mule deer bucks trotted to the edge of the road. I held my breath as two crossed and one didn’t. It’s hard for me to understand how foolish both deer and drivers can be, the deer for not learning to wait for no cars, the drivers for their reluctance to slow down when animals are near the road. No mishaps this time. 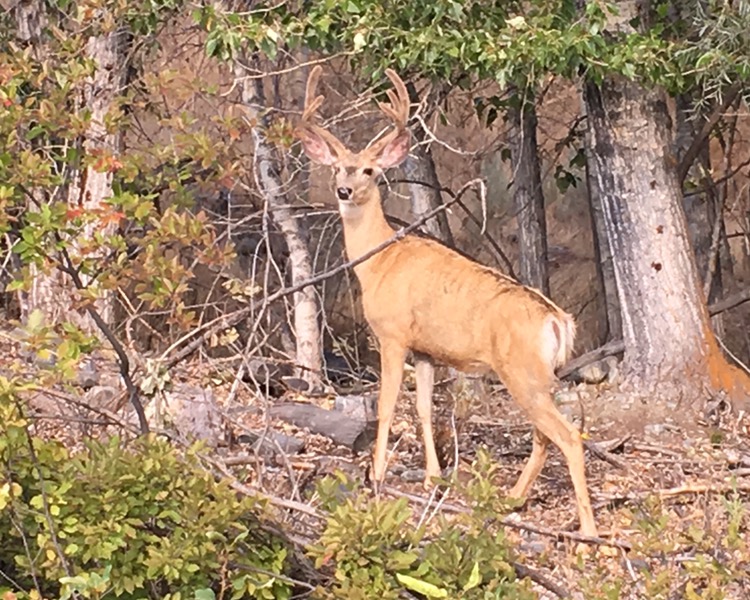 Smallest of the three bucks!

It was a fairly cool morning with a light smoke haze on the Beaverhead Mountains to the east.

One side of the road was being resurfaced. It was an efficient operation with sweeping machines, then a machine laying down asphalt(?) and then immediately covering it with small gravel. Five gravel trucks were backing behind the machine ready to refill it, and two or three packing machines followed. The finished result looked nearly perfect.

The friendly flag man was curious where I was headed and had a little trouble wrapping his head around where I’d actually started and where I was going, but then gave me several enthusiastic fist bumps and offered me elk jerky and water.

Of course I stopped to read all the historical signs. One marked Fort Bonneville. A trapper described it the way: “…several log cabins, low, badly contracted, and admirably situated by besiegers only, who would be sheltered on every side by timber, brush, etc.”

Ahead a white pickup was parked and out stepped Tony Latham. We had a good talk, largely about our firefighting days, and when it started raining continued in his pickup. He presented me with a copy of his book “Trafficking: A Memoir of an Undercover Game Warden.” It’s gotten great  reviews so I was looking forward to reading it.

About noon a car slowed. I was surprised to see it was my old smokejumping buddy Dave Hade and his wife Marty. They hadn’t gotten the message I’d left on their machine yet, so this was a happy coincidence. We agreed to meet later in North Fork if not before. 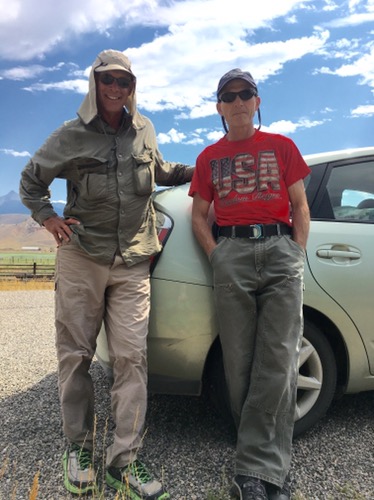 The scenery was great. The Salmon River with its beautiful looking fishing water was often on my immediate left.  Rugged cliffs were common on my right, for example, Tower Rock which the Corps of Discovery had commented upon.

Showers moved through from time to time do I ended up putting on and taking off rain gear.

I made it to The North Fork store about 7 and gratefully sat on a bench out front. Dave and Marty soon pulled up and we drove west along the Salmon. For the first time this whole trip I saw a band of elk, and then another. It was very steep, rugged country.

We had a fine meal including elk meat loaf. The loud sound of rushing water through the open windows of my room made me feel right at home.

We had a fine breakfast with good coffee. After a while Dave and I, his brother Steve and friend Mef headed out to Dave’s water powered generator water pipe where I did stuff that didn’t require any skill, like holding pipes and whatnot. We had a good conversation as we worked. Dave and I worked closely together for nearly 25 years of smokejumping.
Later Marty drove me back to the trail. On the way we saw chukars and two bands of bighorns crossing the road which was fun. 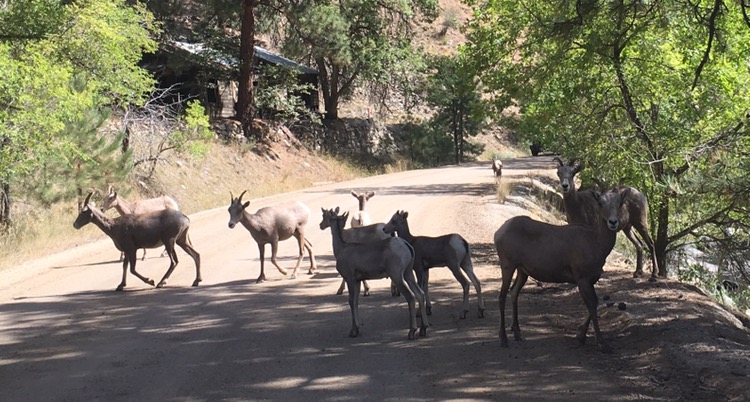 Marty gave me a sandwich and a couple of pastries. I thanked her for the hospitality and started walking just after noon.
I’m a big fan of this area: timber, mountains and the North Fork of the Salmon with meadows in places. It was pleasant walking weather as well with moderate temps, fairly let traffic and mostly wide shoulders.
I got another good surprise when Jim Griffin drove up. Despite the two hundred-some miles I’ve walked since Three Forks it’s a much shorter drive via Chief Joseph Pass. Jim whipped out a cold drink and a camp chair and we lounged in the shade as we got caught up.
Jim went to scout out a good camp spot while I continued cranking out the miles. In places chokecherry trees hung heavy with fruit so I ate a bunch of the tiny cherries with big pits.
At Gibbonsville the famed Mexican restaurant was closed but the bench out front was shady and comfy. I’d had no coverage since yesterday morning but didn’t have a password for the WIFI signal. Bummer.
When Griff drove up at 8 PM, right on time, I was surprised to have walked 19 miles since noon.
At camp Griff heated up some good elk stew. With salad and fresh fruit we were living large. Raz the lab enjoyed fetch and tug of war with us while I sewed up a failing seam in my pants with dental floss. It was nice to be camping with Griff again. After not seeing anyone I knew before for about four months straight it was really fun seeing this series of old friends.
We hit the hay at dark, like proper thru-hikers. Colter

Clark: August 23rd Friday 1805… The River from the place I left my party to this Creek is almost one continued rapid, five verry Considerable rapids the passage of either with Canoes is entirely impossable, as the water is Confined betwen hugh Rocks & the Current beeting from one against another [thus, the Salmon River was impassable and they’d need to follow another route.]

Lewis: Saturday August 24th 1805… Cameahwait literally translated is one who never walks. he told me that his nation had also given him another name by which he was signalized as a warrior which was Too-et’-te-con’-e or black gun. these people have many names in the course of their lives, particularly if they become distinguished characters. for it seems that every important event by which they happen to distinguish themselves intitles them to claim another name which is generally scelected by themselves and confirmed by the nation. those distinguishing acts are the killing and scalping an enemy, the killing a white bear, leading a party to war who happen to be successfull either in destroying their enemies or robing them of their horses, or individually stealing the horses of an enemy. these are considered acts of equal heroism among them…