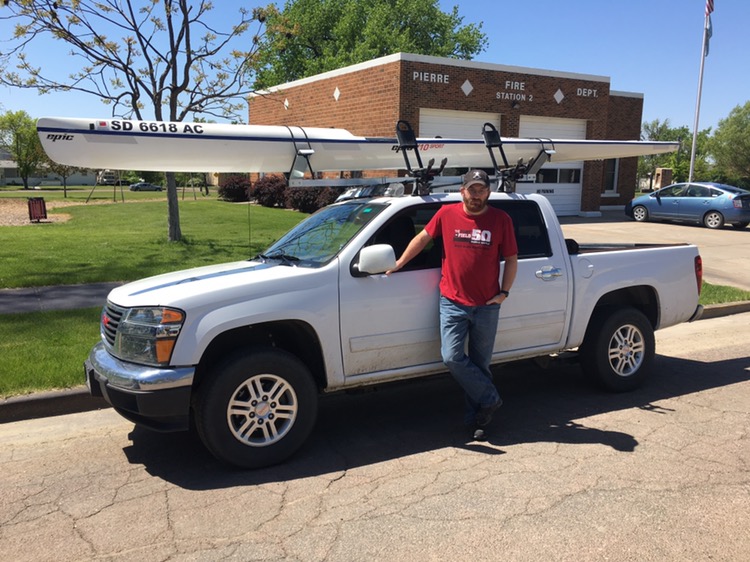 It was a beautiful day today, mild winds and sunny. I wish it would stay like this for the next month!

There was a little current as I neared Pierre. Several fishing boats were trying their luck. I found the side channel leading to town and landed in a park. With everything carried up to a grassy area I sorted through things, throwing out all trash, and taking inventory of remaining food. I set aside two items to mail to a friend, my warmest jacket, no longer needed, and my wading Crocs which didn’t work for me when my feet got muddy and slippery.

I put small valuables in my pack then stashed the boat in a well hidden spot. On the way to the grocery store I stopped at a cafe for an epic pulled pork burger.

The “grocery store” was a head scratcher. It appeared to be a combo butcher-baker with a bunch of assorted drinks. There was almost nothing for foods that I wanted.

Later Patrick Wellner of the Missouri River Paddlers met me with my package containing my spare eyeglasses, the package that has been chasing me. Thanks Patrick!

I next walked to the Post Office and mailed off my stuff, then on to the Dakotamart, a REAL grocery store. After leaving with enough food for the next 8 days or so I stopped for TWO ice cream cones.

Before I got back to the boat I remembered I needed a lighter. That oversight led me past a thrift store with tons of books. I bought two for what looks like upcoming wind days.

It turned out to be a lot of walking, but at last I was repacked and paddling. There was the causeway to cross and I thought it was going to be a big hassle. But I put my cart together, portaged and was paddling again in less than 15 minutes!

Near the Lake Oahe dam is a campground. I packed everything over the riprap then put the cart together and loaded the boat for the third-and-half time today. It was an easy wheel to my campsite.

I got a good hot shower and washed my clothes in the sink. Next door were four fisherman. They asked if I wanted a burger. Sure!  We swapped stories while I ate two burgers. Thanks guys!

As mentioned, it looks like several consecutive days of wind coming up starting tomorrow afternoon. I might get stuck with no coverage but I’ll update when I can. Colter

Clark: 23rd Septr…three Souex boys Came to us Swam the river and informd that the Band of Soauex called the Teton of 80 Lodges were Camped at the next Creek above, & 60 Lodges more a Short distance above, we gave those boys two Carrots of Tobacco to Carry to their Chiefs, with derections to tell them that we would Speek to them tomorrow…

Clark: 24th of September…Colter ran up the bank & reported that the Sioux had taken his horse, we Soon after Saw five indians on the bank; who expressed a wish to come on board, we informed them we were friends, and wished to Continue So, we were not abraid any Indians—Some of their young Men had Stolen a horse Sent by their Great Father to their great Chief, and we Should not Speak to them any more untill the horse was returned to us again…
Trip overview and route map with position updates:
https://bucktrack.com/Lewis_and_Clark_Trail.html