The day started out clear with a light tailwind. My arm felt pretty good when I started paddling.

The shore was often littered again today with petrified wood, including stumps, pieces, and large logs. When I had coverage did some research and was interested to find that many of these petrified trees are about 60 million years old, and are a type of redwood tree thought to be extinct, but then discovered in fairly modern times in China! 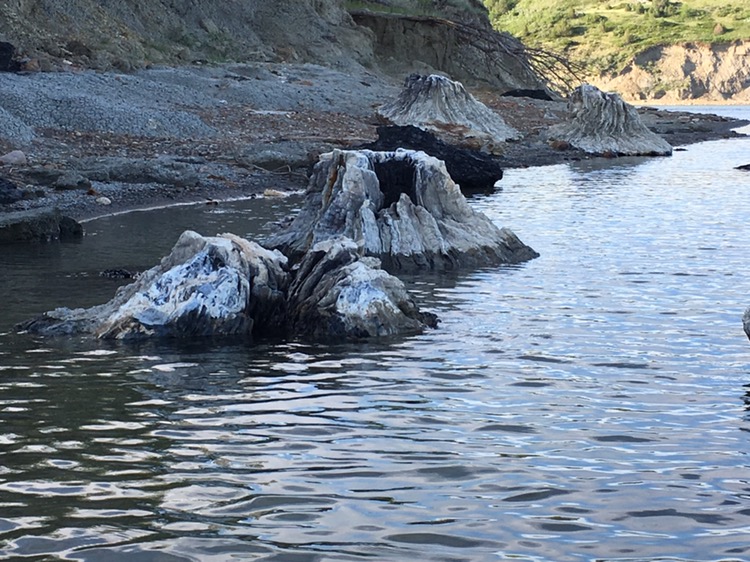 For me, the most favorable wind is a light tailwind and I had that for a few hours today. I would rather have a light headwind then a strong tailwind as the latter makes the boat hard to control. The only time waves were an issue today is crossing side bays and even then everything was well in hand all day.

I’ve been seeing pelicans daily. They are very unusual looking creatures. One turned to fly right over me, looking down at me curiously.

It started looking more like the Badlands as the day progressed, with weathered, eroding, partially whitish looking bluffs.

I was making a point of taking it easy on my right arm, trying to hold my paddle in such a way that it wouldn’t cause pain. i ended up doing another 30 mile day and it felt much, much better at the end of the day today. Another big plus is the high kayak seat back Stellar sent, me held in its proper position with a piece of foam, has made a big difference on my back comfort. And the “bucket seat” foam I sculpted and added to the seat has made my butt much more comfortable.

When it came time to camp I landed the boat and it looked like a real party spot. An unseen road lead down to the bank and four wheelers and four-wheel-drives hadvbeen driving up and down the river. I backtracked a way and the next spot I checked was similarly unfavorable. I backtracked even farther and located a nice hidden spot, and also carried the kayak up and hid it in the brush.

It was very warm in the sun, even in the very late afternoon, so it was nice to set up in a very shady spot. When I crawled in the tent and lay down I realized how tired I was. I was mentally tired by planning for  my resupply ahead, reading the wind and waves, trying to determine where to meet a buddy of mine in a couple of days, so many things to consider. I was also physically tired from the wind and the sun, the hard paddling, and crawling in and out of the kayak many times during the day.

I hope to make it to Tobacco Gardens Campground late Friday. Colter

Lewis: Saturday April 13th… hoisted both the sails in the White Perogue… carried her at a pretty good gate… a suddon squall of wind struck us and turned the perogue so much on the side as to allarm Sharbono who was steering at the time, in this state of alarm he threw the perogue with her side to the wind, when the spritsail gibing was as near overseting the perogue as it was possible to have missed… I ordered Drewyer to the helm and the sails to be taken in… this accedent was very near costing us dearly. beleiving this vessell to be the most steady and safe, we had embarked on board of it our instruments, Papers, medicine and the most valuable part of the merchandize… we had also embarked on board ourselves, with three men who could not swim and the squaw with the young child, all of whom, had the perogue overset, would most probably have perished… we found a number of carcases of the Buffaloe lying along shore, which had been drowned by falling through the ice in winter and lodged on shore by the high water when the river broke up about the first of this month. we saw also many tracks of the white bear of enormous size, along the river shore and about the carcases of the Buffaloe… the men as well as ourselves are anxious to meet with some of these bear. the Indians give a very formidable account of the strengh and ferocity of this anamal, which they never dare to attack but in parties of six eight or ten persons; and are even then frequently defeated with the loss of one or more of their party…

Clark: 14th of April Sunday 1805. Saw the remains of two Indian incampments with wide beeten tracks leading to them. those were no doubt the Camps of the Ossinnaboin Indians (a Strong evidence is hoops of Small Kegs were found in the incampments) no other nation on the river above the Sioux make use of Spiritious licquer… The Borders of the river has been So much hunted by those Indians who must have left it about 8 or 10 days past… passed a Island above which two Small Creeks falls in on the L. S. the upper of which is the largest and we call Shabonas Creek after our interpreter who incamped several weeks on this Creek and is the highest point on the Missouri to which a white man has been previous to this time.