It was another fine morning for paddling and my first goal was Silos Campground. When I got there I grabbed my empty water bottles and headed for the hand pump. After several pumps no water had come out yet but it was greased and there was no sign so it seemed likely that it was just one of those that took a bunch of pumping for the water to start. I asked a young guy there if it worked and he said to ask the campground host, but it was early and I hated to bother him. I gave it a few more  pumps and then to took a walk around the campground looking for another source, but didn’t see anything except a lady with a very long lensed camera who was looking for baby birds to photograph.

I headed back to the pump and gave it several more pumps.

“That thing hasn’t worked in years” said the campground host over his shoulder. He was now outside.

“Most people figure it out after a few pumps,” he said. That didn’t seem like a very satisfactory response. I took my water bottles and headed back to my kayak. Down the shore a way I spotted what apparently was another part of the same campground, walked up there, explored, and found a conventional water spigot.  It seems like the host might have told me about it, but I had my water.

Finding the river at the head of the lake wasn’t as simple as it might seem. I went up two false channels before finding one that lead to current. What they all had was numerous carp. It was entertaining watching them swim around anyway.

After a while the Missouri developed a more trout stream style look. One fishermen I spoke to said he just caught one.

At the Townsend bridge I considered walking into town but the traffic made me turn around. I could make it with the food I had.

I paddled past some interesting reddish colored bluffs that Lewis had commented on. 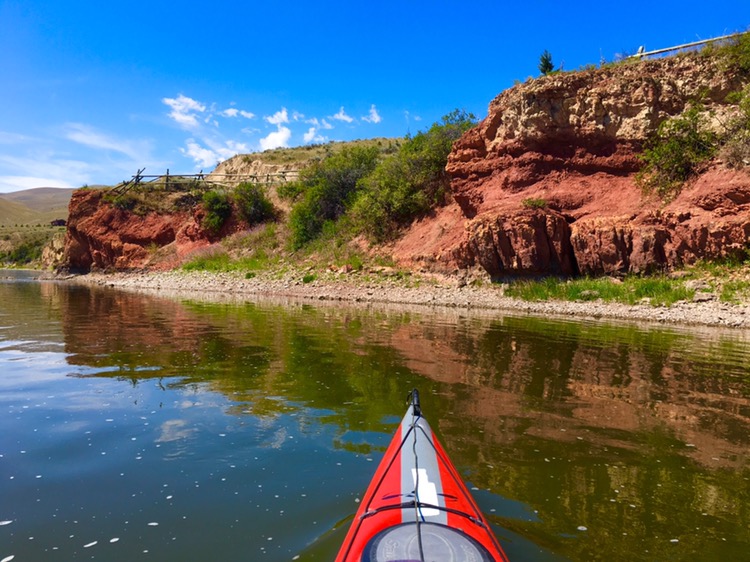 I was alternately walking and dragging the kayak and then paddling as I’ve done so much the last few hundred miles.

Norman Miller said he might meet me today and to keep him posted by text as to where I was. I had just texted him that I was nearing York Islands when my phone rang.

“This is Norm. Where are you?”

“Just coming up on York Islands.”

It took a little bit of map consultation to figure out which of the braided channels I needed to take to find him, but we had guessed right: as I turned left and waded up the next braid I could see Norm standing along the shore. He took videos as I approached and I paddled over to where his pickup was parked.

I had talked and emailed and texted him so many times it was great to see him in real life. Norm is an expert on paddling the Missouri River and did much the same trip that I’m doing a few years ago, so we had a whole lot to talk about.

Norm said he had brought me some food and begin to lay out a veritable feast on the gravel bar: sushi, fried chicken, lemonade, apples, chocolate, potato salad, chips, salsa, home picked raspberries, a beer and no doubt some stuff I’m forgetting. He knows how hungry a paddler gets. I ate all I could reasonably hold and left with a big bag of chicken. He had made the long drive from Livingston to meet me, too. Thanks Norm, it was much appreciated and I look forward to seeing you again soon. 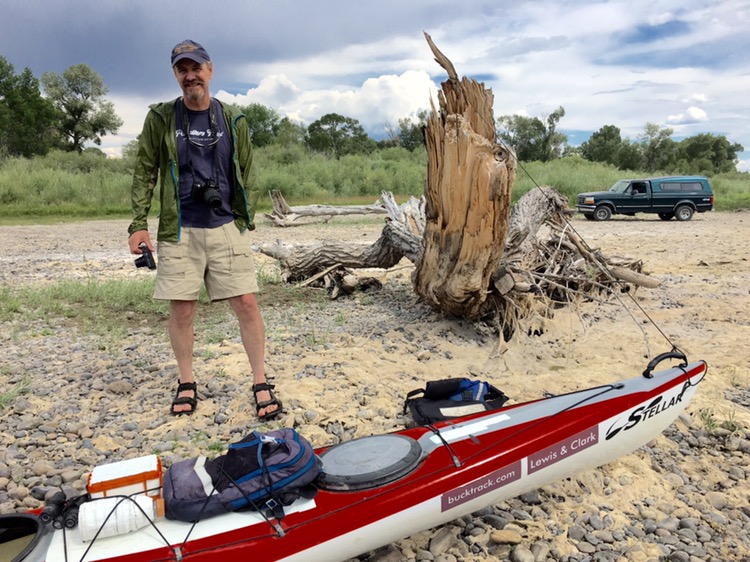 A storm had been lingering nearby, putting down some lightning bolts in the mountains along with some rain and a few sprinkles where we were, but it moved on before doing much. I thanked Norm and paddled away.

I’d been planning to do 20 miles but when I hit 18 miles I decided to call it a day. Three Forks, 33 miles away, should be within striking distance on Thursday. It’s hard to believe I’m so close to the end of the Missouri River.

This evening a little fawn was looking at my tent and stomping his foot. Colter

Clark: July 23rd Tuesday 1805 a fair morning wind from the South. I Set out by land at 6 miles overtook G Drewyer who had killed a Deer. we killed in the Same bottom 4 deer & a antelope & left them on the river bank for the Canoes proceeded on an Indian roade through a wider Vallie which the Missouri Passes about 25 miles & Camped on the bank of the river, High mountains on either Side of the Vallie Containing Scattering Pine & Cedar Some Small Cotton willow willow &c. on the Islands & bank of the river I Saw no fresh Sign of Indians to day Great number of antelopes Some Deer & a large Gangue of Elk.

Lewis, July 24, 1805: …the valley through which the river passed today is much as that of yesterday nor is there any difference in the appearance of the mountains, they still continue high and seem to rise in some places like an amphatheater one rang above another as they receede from the river untill the most distant and lofty have their tops clad with snow. the adjacent mountains commonly rise so high as to conceal the more distant and lofty mountains from our view. I fear every day that we shall meet with some considerable falls or obstruction in the river notwithstanding the information of the Indian woman to the contrary who assures us that the river continues much as we see it. I can scarcely form an idea of a river runing to great extent through such a rough mountainous country without having it’s stream intercepted by some difficult and gangerous rappids or falls. we daily pass a great number of small rappids or riffles which decend one to or 3 feet in 150 yards but they are rarely incommoded with fixed or standing rocks and altho strong rappid water are nevertheless quite practicable & by no means dangerous…