It poured rain last night but nary a drop reached my tent, tucked safely under my magnificent bridge.

With the world soaked and dripping, it was a pleasure to pack up my dry stuff completely out of the rain.

I walked past a gravel road on my way back to the paved road I was following, and saw a strange animal crossing.  I couldn’t tell what it was at first, it was moving slowly, I thought armadillo?? but then I recognized it was a big snapping turtle. In this shot his long neck is retracted. 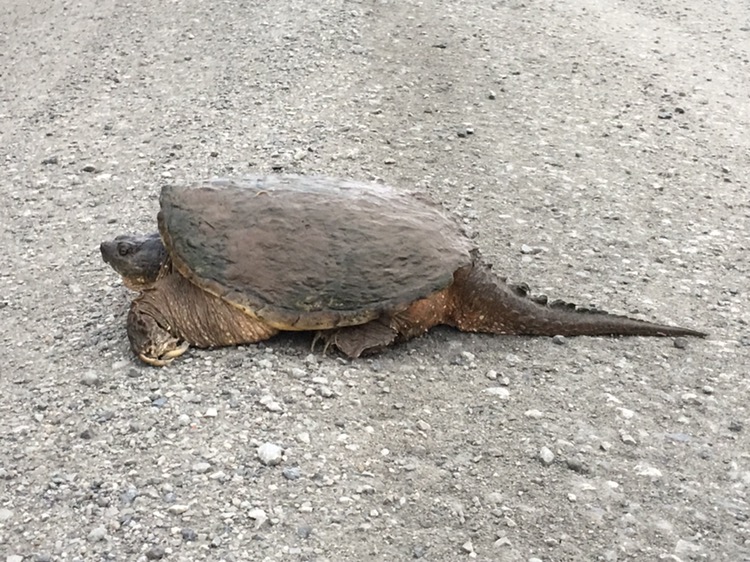 I walked into Nemaha. I saw a sign “Coffee and Donuts.” When I got closer I saw a red neon sign illuminated and another sign that says open 7 AM, the current time 7:30! Another sign said “Closed Monday.” Today, Monday. Bummer.

There were many muddy footprints crossing the road, from deer, raccoons and possums. I soon found out the dirt shoulder was extremely muddy for humans too, so I avoided walking in the dirt as much as possible. 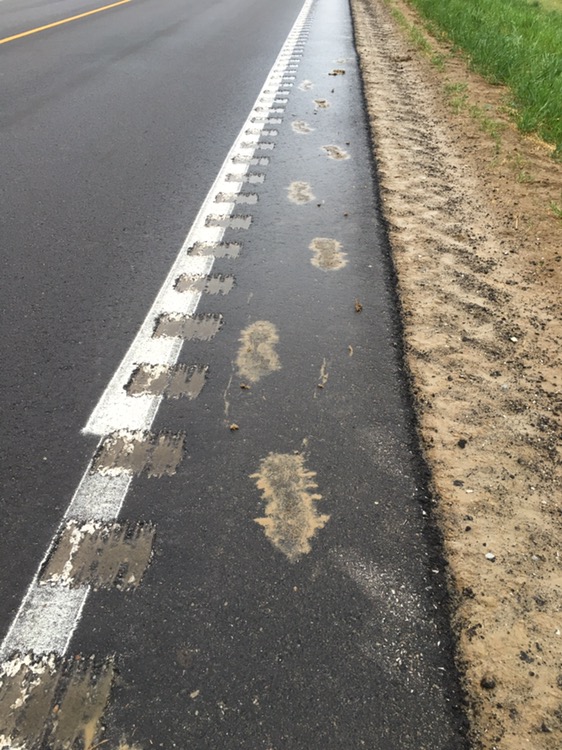 It began raining and continued
to rain like it meant business. My best information said there was a café in Brownsville and so I was putting in the miles as quickly as I could to get myself breakfast and to get out of the rain. When I got there I turned and went down what looked to be the main street. There was an old man outside.

“Yep it’s right there. Closed on Mondays though.”

Well it could’ve been much, much, worse. Just a few steps away were covered picnic tables, so I sat down there and got out of the rain and got myself some cold breakfast, getting out of my wet rain gear and putting on my warm jacket and balaklava.

Here, my route joined the Steamboat Trace, another old railroad track turned into a hiking and biking trail. For miles and miles I once again had the world to myself, walking a wide path paralleling the Missouri River. The only downside was the continued pouring rain. I’ve heard many people say that it doesn’t matter if you get wet from the inside (from sweat), or the outside; in other words, raingear doesn’t really do any good, but I’m here to tell you that today would have been a mighty chilly day without rain gear.

The trail reached a long series of sandstone cliffs where people have been signing their names and working on their art for decades. I’m guessing that somewhere under all that “Sandy and Jeff 1972” there was some Indian artwork at one time. It was actually pretty interesting, the earliest I saw I was about 1907 but I’m sure there was more ancient stuff there, and some of the artwork showed talent. Some didn’t.

Peru was the last of the three towns that I was hoping to get some supplies from. I noticed for the first time that the only store that I was aware was at the south south end of town, while my route arrived on the opposite end. I would have to backtrack about a mile and a half. I would rather go hungry for a half a day than walk 3 miles round-trip to get food.  I stood there with rain streaming off me when I spotted another covered pavilion with picnic tables.

I used my iPhone for one last attempt to find some other business that might have food. The Chamber of Commerce had a grocery store listed. When I searched for it I found it was only about four blocks away. On the way I came to an open bar and grill!!! I opened the door and was enveloped by the warm air.

The waitress told me to sit anywhere, and said they had a special on some kind of chicken cheese-melt sandwich. Let me tell you that chicken sandwich was epic and it came with a huge plate of curly fries and I got hot tea instead of a pop. After the hours and hours and hours of tromping down a wet trail in the cold rain, getting out of my wet rain gear and eating some hot food was a wonderful treat.

A chubby teenager was sitting at the bar with his dad, boldly looking at me with a smug look on his face, amused at the guy who came in all wet. I stared back at him until he looked away.

The waitress and later the cook were asking me about my walk and were very friendly and interested.

“You walked from ST LOUIS?” The cook asked, incredulous. “How far are you headed?”

“Hopefully the Pacific.” Despite my bedraggled appearance, he was envious.

They gave me warm wishes of good luck when I left.

The grocery store was on the same block, a small place with plenty of choices. When I was stuffing my haul into my pack, a long rip suddenly appeared in the extension collar of the pack. Bad news on a rainy day. I’ve got a closed-cell sit pad I keep on top, it made a good shingle to keep the rain out.

I’d just gotten back to the trail when serendipity struck again. A free campground! With dry, three-sided shelters!  Nearby the pavilion with running water and bathrooms!

I’d already put in decent miles. I chose a shelter and took a nap, then spent an hour repairing my pack with a needle, dental floss and duct tape. This pack has nearly two thru-hikes worth of miles on it, the light materials eventually give.

Except for the pack ripping I had some extraordinary luck later in the day! Colter

Sunday July 15th This evening I discovered that my Chronometer had stoped, nor can I assign any cause for this accedent; she had been wound up the preceding noon as usual. This is the third instance in which this instrument has stopt in a similar manner since she nas been in my possession, tho the first only since our departure from the River Dubois.

July 15th Sunday 1804. a heavy fog this morning which Detained us untill 7 oClock, put Drewyer Sgt. Floyd on Shore, at 9 I took two Men and went on Shore, with a view to Kill Some elk, passed thro open plains, and barroney lands Crossed three butifull Small Streams of water, Saw great quantity of Cherres Plums, Grapes & Berries of Difft. Kinds, the lands Generally of a good quallity, on the Streams the wood escapes the fire,