The forecast called for an inch of rain, most of it in the morning. My plan called for waiting for it to diminish before packing up quickly. Usually it’s not a good idea to set up or take down camp when it’s raining hard.

It started raining before dawn and then rained harder and harder. I’d expected it so I had the hatches battened down pretty good and when it began raining I turned on my little LED light, looked around, and everything was in fine shape.   As a reminder my shelter is basically just a tarp with bug netting, with one side mostly open, so it has to be set up carefully and used properly to keep you dry.

It was raining harder and longer than I expected but I was still staying dry and the wind was blowing from a good direction. But then I noticed that it had been raining so hard that water was beginning to pool on the flat, grassy ground, and the wind was beginning to swing around to blow in the 2/3 open door of my shelter. Now the netting would keep out most of that rain and I could’ve put up a plastic bag to block it but I was going to get flooded out regardless. 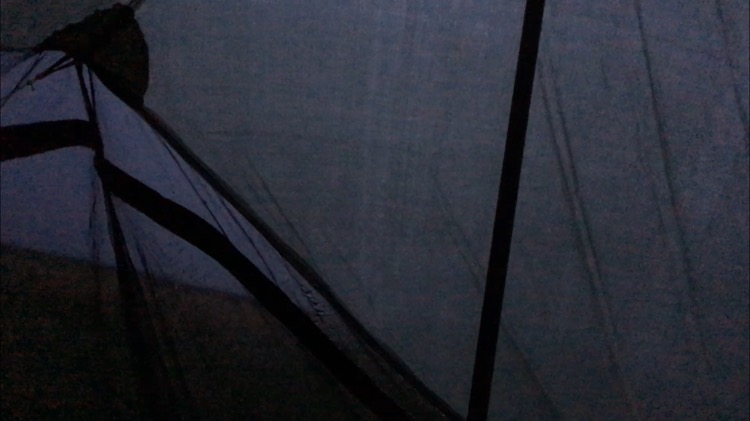 Downpour at Dawn, from inside my tent

So here’s the deal: if I try to sit up my butt would immediately squish down into standing water so I stayed horizontal, packing up all of my dry stuff in the plastic bags that line my pack. I rolled those bags over to keep the inside of my pack dry.  I put on all my rain gear, deflated my air mattress and rolled it up tightly putting it on top of my pack, then did the same thing with my tent.

It’s been about two weeks since my last day off so I decided this would be a swell day to take that next (partial) one. I knew there were motels at the I29 intersection. The bad news was that I had to backtrack a couple miles, and then walk three more miles to get there.

I got to Motel 6. They could not possibly have been nicer. They let me check in crazy early, like at 9 o’clock in the morning. I got my laundry done, ate a bunch of food and hung up my tent and air mattress and pack and everything else to dry, and had a nice relaxing day.

I looked up the local rainfall. Looks like about 2″ this morning!

…Small butiffull runs Come from the Plains & fall into the river, a Deer lick on the first, above those two Creeks, I found in my walk on Shore Some ore in a bank which had Sliped in to the river 3/ 4 me. above the Creeks, I took a cerequite around & found that those two runs mentioned contained a good proposion of wood Surrounded by a plain, with grass about 18 Inchs. high, (Capt Lewis walked on Shore after Dinner) in the first bind to the right above those Runs passed a Small Island opsd. is a Sand bar I call this Island Butter Island, as at this place we mad use of the last of our butter…