Last Camp on the Missouri

There were often mountain ranges in sight today, but on a twisting river and seeing them from an unfamiliar perspective I couldn’t identify them with certainty, but one range might have been the Madisons.

There were stretches of river this morning that didn’t feel like a Rocky Mountain river, but more like a warm water river. There were many carp for example. And my progress at times seemed painfully slow with slippery, algae covered rocks when pulling was necessary.

Near the Toston dam high bluffs rose again. The Mandans had told Lewis and Clark about them. 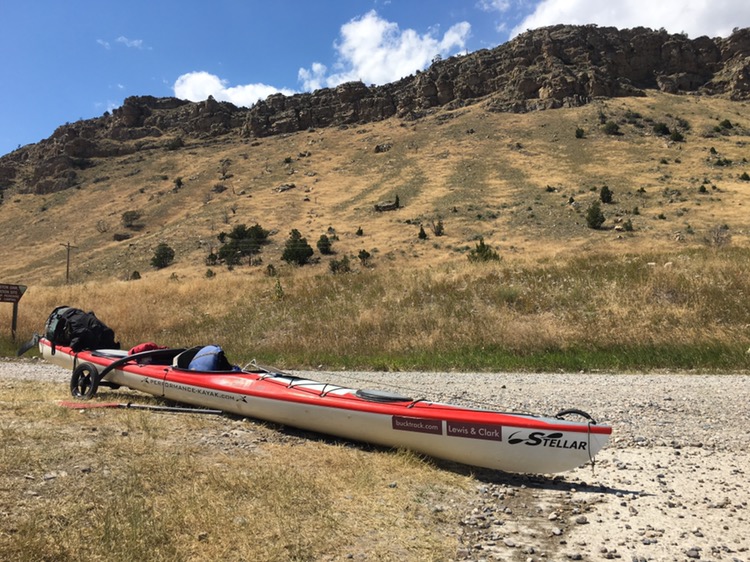 The dam was much smaller than I’d expected, maybe 20 feet high. The portage went like clockwork. After I launched I spotted a nice shady little flat spot near the river. A mule deer buck watched me from his bed there. What a perfect spot, cool, breezy, shady, with food and water a few steps away.

It took less than an hour to paddle the lake. A train track ran along the edge. Three trains passed while I was there and the engineers waved at me. One was a passenger train. The magnificent bluffs were providing some nice scenery for the passengers.

It took me until nearly 8 PM until I made my 20 miles, closer to 21, actually. I checked my maps: only 12 miles to Three Forks! 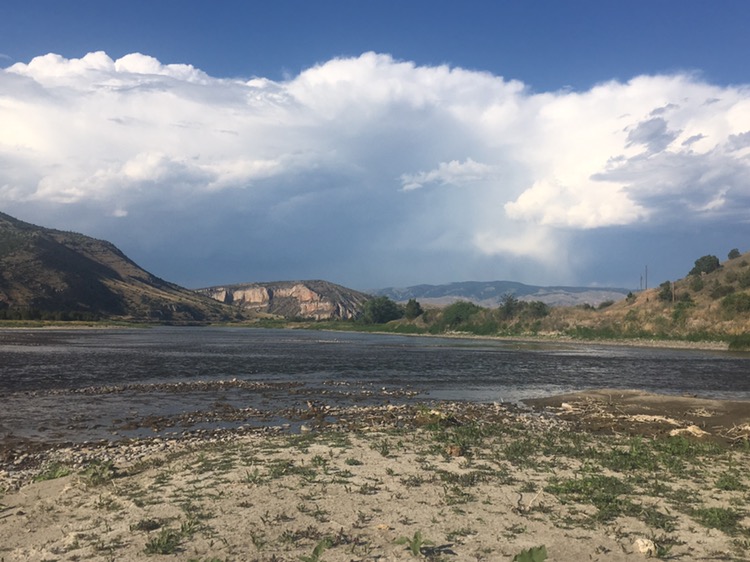 As I boiled water on my little stove, watching the evening shadows on the hills and listening to the river, I realized this would be my last night on the Missouri. Colter

Lewis: Thursday July 25th 1805… the face of the country & anamal and vegatable productions were the same as yesterday, untill late in the evening, when the valley appeared to termineate and the river was again hemned in on both sides with high caiggy and rocky clifts… This morning Capt. Clark set out early and at the distance of a few miles arrived at the three forks of the Missouri, here he found the plains recently birnt on the stard. side, and the track of a horse which appeared to have passed only about four or five days. after taking breakfast of some meat which they had brought with them, examined the rivers, and written me a note informing me of his intended rout, he continued on up the North fork, which though not larger than the middle fork, boar more to the West, and of course more in the direction we were anxious to pursue. he ascended this stream about 25 miles on Stard. side, and encamped, much fatiegued, his feet blistered and wounded with the prickley pear thorns. Charbono gave out, one of his ankles failed him and he was unable to proceede any further…