Fog hung over the river. It was quiet except for the sound of water. The scenery likely looked similar a thousand years ago. Many times I had to get out and pull my kayak, sloshing upstream through the fast water. It wasn’t hard to imagine the men of the Corps appearing ahead in the fog, straining at the elk hide ropes, a man stumbling and cursing, his friends laughing, the Captains occasionally shouting an order, making another mile, looking to see what lies around the bend, farther west.

The white cliffs were spectacular with varied formations, walls and spires. Two mule deer spooked and scrambled up before the cliffs stopped them. They tensely watched me pass a hundred yards below. 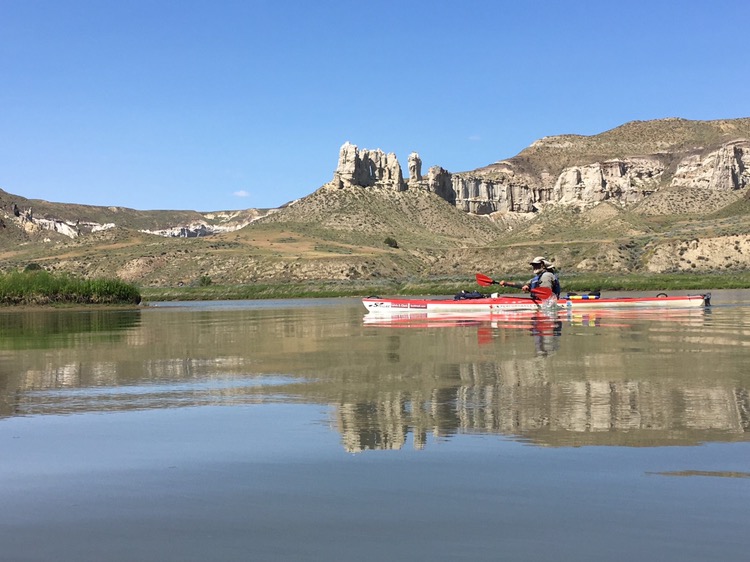 Paddling Past the 7 Sisters

My shoes are intent on falling apart so at nearly every break I made some adjustments to my repairs, which consist of duct tape, parachute cord, and webbing.

There were several groups of canoes and kayakers today. Two ladies paddled over.

“I wanted to say how impressed I am you are paddling upstream.”

“Where did you start?”

“St. Louis! Wow. Are you headed to Three Forks?”

“I’m doing the Lewis and Clark Trail, so I’m headed to the Pacific.”

Those exchanges are always fun.

Today was the best scenery of the whole trip. I took many photos. My mini tripod is missing. Did I leave it somewhere? It was tough taking self timers without it.
I passed the Hole in the Wall, a hole in a rock wall, visible for miles. 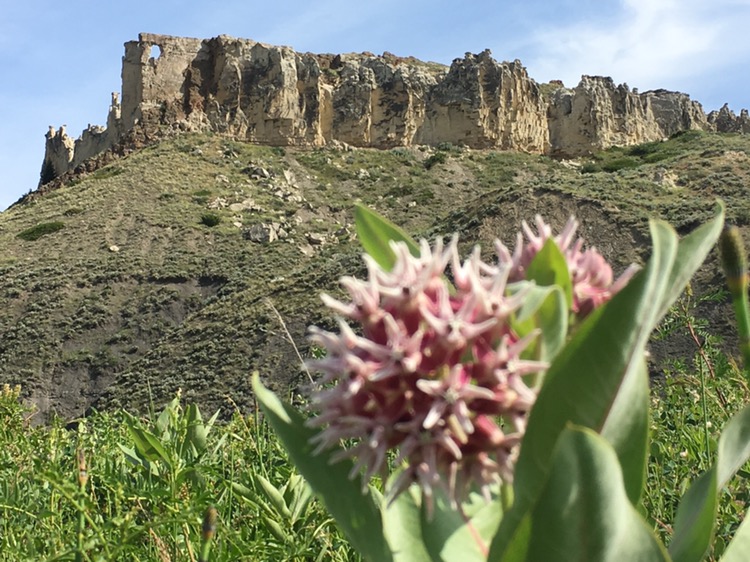 Hole in the Wall

I camped near another famous landmark of the upper Missouri, the Citadel. Even with headwinds at time I made 21 miles today, and today I passed the 2,000 mile mark.   Colter 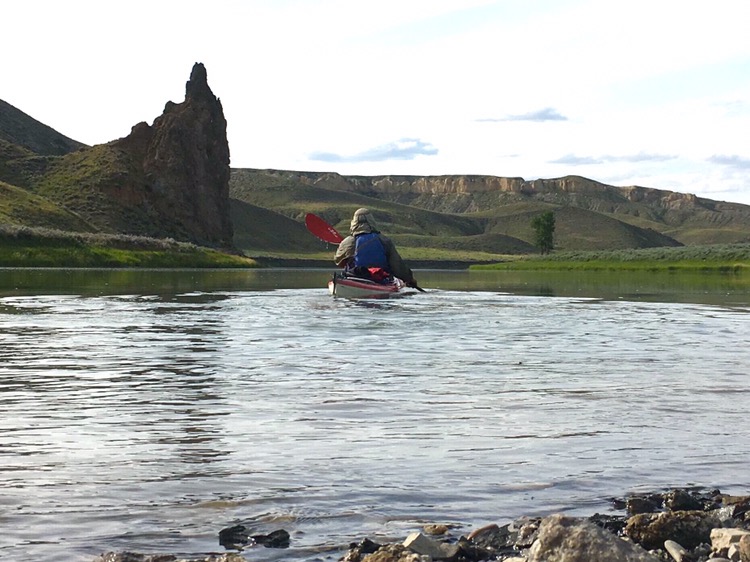 A reminder that my updates depend on coverage. No need to be concerned if I miss many days.

Lewis: Wednesday May 29th 1905. Last night we were all allarmed by a large buffaloe Bull, which swam over from the opposite shore and coming along side of the white perogue, climbed over it to land, he then alarmed ran up the bank in full speed directly towards the fires, and was within 18 inches of the heads of some of the men who lay sleeping before the centinel could allarm him or make him change his course, still more alarmed, he now took his direction immediately towards our lodge, passing between 4 fires and within a few inches of the heads of one range of the men as they yet lay sleeping, when he came near the tent, my dog saved us by causing him to change his course a second time… This morning we set out at an early hour and proceded as usual by the Chord. at the distance of 21/ 2 miles passed a handsome river which discharged itself on the Lard. side… Cap. C who assended this R. much higher than I did has thought proper to call it Judieths River… today we passed on the Stard. side the remains of a vast many mangled carcases of Buffalow which had been driven over a precipice of 120 feet by the Indians and perished; the water appeared to have washed away a part of this immence pile of slaughter and still their remained the fragments of at least a hundred carcases they created a most horrid stench. in this manner the Indians of the Missouri distroy vast herds of buffaloe at a stroke… this stream we called slaughter river.

Clark: May 30th Thursday 1805 The rain conmmenced yesterday evining, and continued moderately through the course of the night, more rain has now fallin than we have experienced Since the 15th of September last, the rain continued this morning, and the wind too high for us to proceed, untill about 11 oClock at which time we Set out, and proceeded on with great labour, we were obliged to make use of the Tow rope & the banks were So muddey & Slipery that the men could Scercely walk not with Standing we proceeded on as well as we could wind hard from the N W. in attempting to assend a rapid our toe Cord broke & we turned without injurey, those rapids or Shoaley points are noumerous and dificuelt…