My tent was soaked with condensation this morning. It’s interesting that one morning my tent will be completely dry and the next it will be soaked, just based on condensation conditions.

The river water was at almost exactly the same level as it was last night. Maybe it didn’t rain that much upstream after all.

The best time to be on the river is early in the morning and to lesser extent late in the evening. The morning light is beautiful, saturating the natural colors. 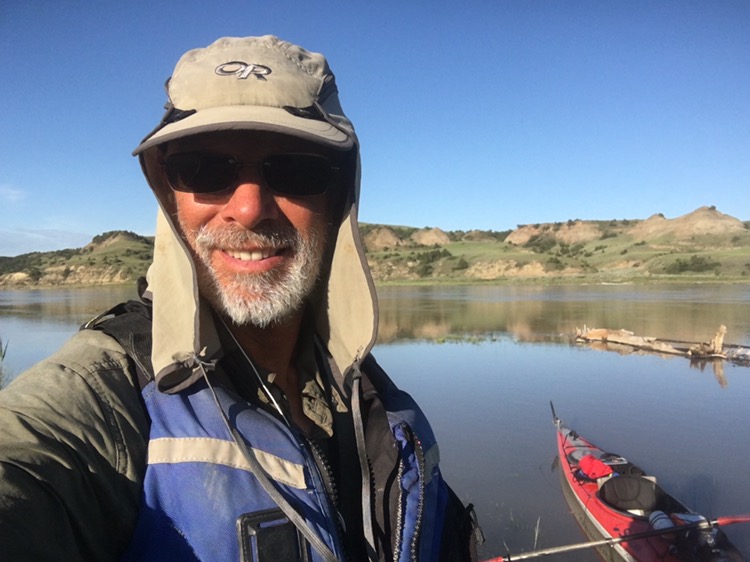 Morning on the Missouri

The river had a strong current most of the day, requiring a great deal of hard paddling. You can’t just dip your paddle in the water and hope you go zipping up the river, you gotta paddle like you mean it. A huge help, of course,is picking the slowest current, I crossed the river many times to look for slower current on inside bends, but sometimes I found the slowest current in the middle of the river.

So far on this trip I’ve been following the Missouri River primarily westbound and northbound.  But now I’ve reached and passed the northernmost point on the Missouri. For the next few hundred miles I’ll be going mostly west towards the Pacific.

I paddled past Williston and when I reached the bridge a mystery was solved.   A crew was using a crane to free debris from the bridge, debris like logs and sticks and bark. That explains why all that debris I’d seen floating didn’t indicate flooding up river.

About the time I passed under the bridge I started having to fight a strong headwind as well. I’ll bet the people that watched me paddle by weren’t  very envious.

It was difficult to find a good place to land for breaks today, much of the river was lined by steep banks or thick willows. At one spot I managed to climb the bank and tie off the boat and sit down in the shade. The bad news is the mosquitoes were thick. I am very tolerant of mosquitoes but I learned that this shirt is not mosquito proof like my other hiking shirts. I sprayed it with some DEET.

I’ve gotten some good advice from various people about resupply ahead. I decided I would resupply at Culbertson and send some food to Fort Peck Marina, hoping that will last me all the way to Fort Benton. That stretch is a tougher resupply, heading upstream, fighting the current. After putting together a shopping list I gave my mom a call then emailed her the list. She, of course, quickly and efficiently did the shopping and the boxes are in the mail.

Toward the end of the day the wind got strong enough so I was getting significant waves. I checked out one camp spot but it was invaded by some kind of tree caterpillars, which explained the denuded trees I’ve been seeing. I paddled another quarter-mile and found a nice camp spot in the cottonwoods.

It’s raining just a bit and thundering some as well but I’m all set up and secure.  I figured I paddled about 23 miles upstream today. Not too shabby in my estimation. Colter

Lewis…April 21st 1805… We saw immence herds of buffaloe Elk deer & Antelopes. Capt Clark killed a buffaloe and 4 deer in the course of his walk today; and the party with me killed 3 deer, 2 beaver, and 4 buffaloe calves. the latter we found very delicious. I think it equal to any veal I ever tasted. the Elk now begin to shed their horns.

Lewis: April 22cd 1805… the wind became so hard a head that we proceeded with difficulty even with the assistance of our toe lines… the broken hills of the Missouri about this place exhibit large irregular and broken masses of rocks and stones; some of which tho 200 feet above the level of the water… I asscended to the top of the cutt bluff this morning, from whence I had a most delightfull view of the country, the whole of which except the vally formed by the Missouri is void of timber or underbrush, exposing to the first glance of the spectator immence herds of Buffaloe, Elk, deer, & Antelopes feeding in one common and boundless pasture… I met with a buffaloe calf which attatched itself to me and continued to follow close at my heels untill I embarked and left it. it appeared allarmed at my dog which was probably the cause of it’s so readily attatching itself to me. Capt Clark informed me that he saw a large drove of buffaloe pursued by wolves today, that they at length caught a calf which was unable to keep up with the herd.