Headwaters of the Missouri

Today was a landmark day, the day I reached the headwaters of the Missouri and the end of my long journey upstream along this longest river in America.

In the morning I was on my last map page of “The Complete Paddler,” the guidebook nearly all Missouri Paddlers carry.

Like many prior days, fast stretches of current alternating with paddleable water had me crawling in and out of the boat many times.

Mink romped along the shore occasionally, swimming across the river as the mood struck them. One stick floating down the river turned out to be a young mink, who suddenly dove on my approach. Blue herons waded the waters and two sandhill cranes fed in the grass. Three big whitetail bucks walked a gravel bar into the willows.

The remaining miles counted down: 12, 8, 3.  Limestone cliffs towered over the river.

Ahead I could see a lone person with a black lab. That would be my smokejumper buddy Jim Griffin. I lifted my paddle in triumph and he raised his arms with a yell. 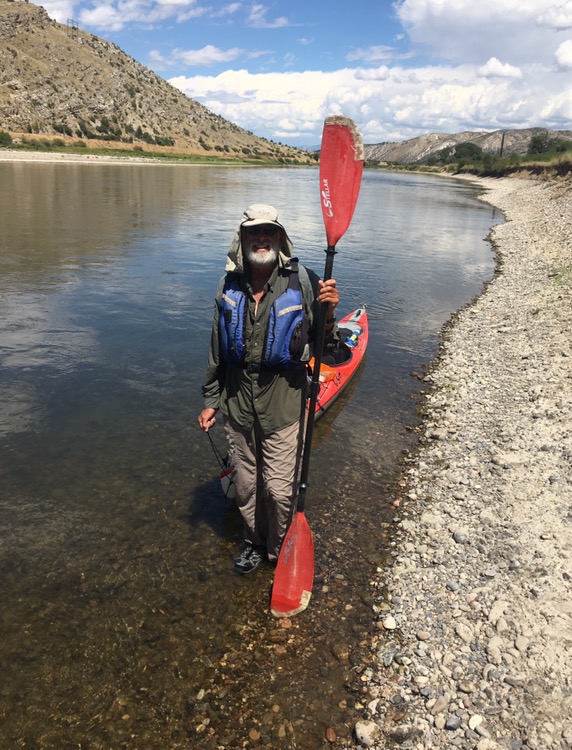 I wanted to paddle up a little farther, to the the confluence of the Madison, so Griff drove upriver.

Another person sat on a rock outcropping ahead. I knew that would be Norman Miller. He congratulated me on completing my long journey up the Missouri, pointing out the final landing just past a stand of cottonwoods ahead. 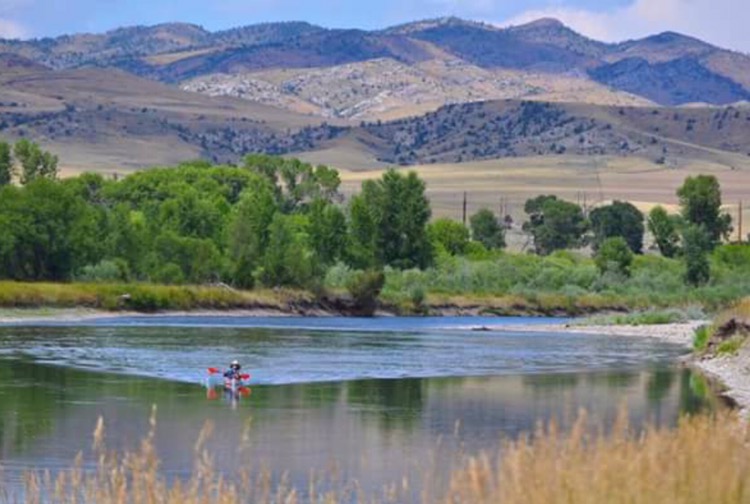 For one last stretch I pulled and paddled until Griff and Norman stood on the shore.

I pulled the kayak the last few feet and my upstream kayak trip was over, I was here at Three Forks. There were handshakes and congratulations. 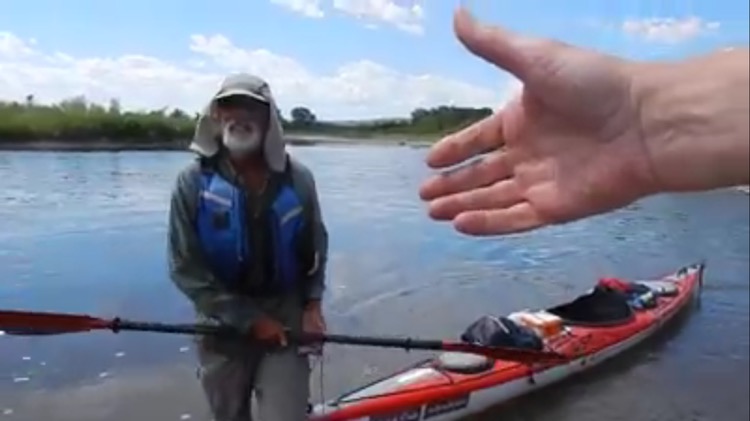 Norm had brought me an usually good sub sandwich, and a tub of berries and fruit. He also brought a Budweiser beer, in honor of St. Louis where the Missouri runs into the Mississippi.

We got my kayak strapped onto Griff’s pick up and all my gear loaded up and we bid farewell to Norm. Thanks to Norm for all the support and all the good food and in sharing the adventure.

Griffin drove us to his beautiful mountain home near Whitehall, our base for many other expeditions. Griff made us a fine meal of elk steaks and salad and potatoes. As we ate outside a small bird landed on the railing eyeing the potatoes. It was so tame it allowed me to touch it before it flew away.

If you can access the Facebook “Missouri River Paddlers” group Norman Miller has posted photos and video of my finish.

I will likely spend two days here in Whitehall to rest, repair and resupply, then I will continue on the route over Lemhi Pass and onto Orofino where I plan to relaunch after about 500 miles and a month of hiking.  The final segment will be 500 more miles to the Pacific. Colter

Lewis: Saturday July 27th 1805. We set out at an early hour and proceeded on but slowly the current still so rapid that the men are in a continual state of their utmost exertion to get on, and they begin to weaken fast from this continual state of violent exertion. at the distance of 13/ 4 miles the river was again closely hemned in by high Clifts of a solid limestone rock… we arrived at 9 A.M. at the junction of the S. E. fork of the Missouri and the country opens suddonly to extensive and beatifull plains and meadows which appear to be surrounded in every direction with distant and lofty mountains; supposing this to be the three forks of the Missouri I halted the party on the Lard. shore for breakfast… Capt. Clark… would rejoin me at this place provided he did not fall in with any fresh sighn of Indians, in which case he intended to pursue untill he over took them calculating on my taking the S. W. fork, which I most certainly prefer as it’s direction is much more promising than any other. beleiving this to be an essential point in the geography of this western part of the Continent I determined to remain at all events untill I obtained the necessary data for fixing it’s latitude Longitude…

Lewis: Sunday July 28th 1805… we called the S. W. fork, that which we meant to ascend, Jefferson’s River in honor of Thomas Jefferson. the Middle fork we called Madison’s River in honor of James Madison, and the S. E. Fork we called Gallitin’s River in honor of Albert Gallitin… Our present camp is precisely on the spot that the Snake Indians were encamped at the time the Minnetares of the Knife R. first came in sight of them five years since. from hence they retreated about three miles up Jeffersons river and concealed themselves in the woods, the Minnetares pursued, attacked them, killed 4 men 4 women a number of boys, and mad prisoners of all the females and four boys, Sah-cah-gar-we-ah or Indian woman was one of the female prisoners taken at that time; tho I cannot discover that she shews any immotion of sorrow in recollecting this event, or of joy in being again restored to her native country…