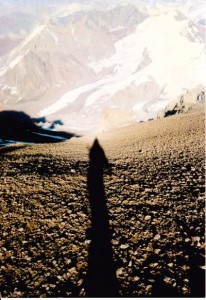 Aconcagua is the highest mountain in the world outside of Asia, and summiting it was an exciting proposition. In 1988 I traveled to South America with my primary goal being a climb of Aconcagua. A year before three of us, including my smokejumper buddies Al Biller and Tom Boatner, had planned to climb it together but I was unable to go. They had a successful climb. I regretted missing the trip and so was now making an attempt by myself.

It’s amazing how times have changed. Now it’s easy to get on the internet to research a trip like this. Back then much of our information came from a magazine article. When I went the next year Tom and Al filled me in on what they had learned. I shudder now, looking back, at the 23ish mile, 5,000ish foot climb from Puenta del Inca to Plaza de Mulas with a pack that must have weighed nearly 90 pounds.

Aconcagua CAN be an “easy walk-up” compared to mountains such as K2, but that in itself often gets people in trouble. The altitude can be dangerous and many climbers have succumbed to high altitude pulmonary edema (HAPE), or high altitude cerebral edema (HACE) and the occasional Viento Blanco winds, which can far exceed 100 mph. Usually several climbers a year die on the mountain although good stats are hard to pin down. 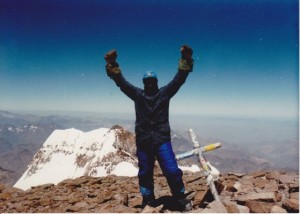 I was lucky and didn’t get any unusually high winds and didn’t suffer significantly from the altitude, perhaps because I “climbed high and slept low.” On January 1, 1989 I summited Aconcagua. It was cool to think that at that moment I likely stood higher on terra firma than any other human on earth.

This page is in development and I will add more as time allows.