Denali from the East 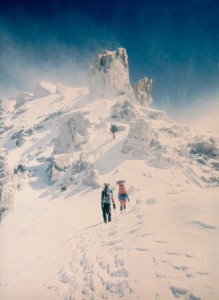 In 1991 Tom Boatner, Lisa Armstrong and I climbed Denali. We were experienced in the outdoors, but our experience in skills such as crevasse rescue was limited so we decided to go with a guided expedition.

Denali,  formerly known as Mt. McKinley, is a serious mountain. Our route, the standard West Buttress Route, is considered a “walk-up” by many experienced mountaineers, but if so it’s a walk up where things can still go very badly very quickly. The evening before our climb we were in the bunkhouse when the world began shaking. To quote the Park Service:

The 1991 mountaineering season on Denali began with a rumble as a major earthquake hit the range on April 30th. Measuring 6.1 on the Richter scale, the epicenter was just south of Mount Foraker. Huge avalanches were observed throughout the range, as well as several reports of close calls among climbers. Luckily there were no injuries. 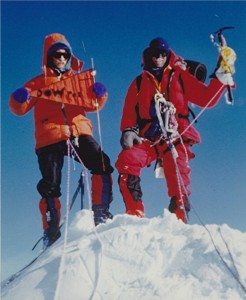 We flew up to the Kahiltna Glacier the next day, May 1st. We were lucky enough to summit nearly three weeks later.

Sounds like an exciting start to your adventure. Next time you want to try Denali again look us up.