It was nice to start the day showered and laundered. I ate half of a Subway sandwich and half of a giant tub of yogurt. I submitted an Amazon order for some misc supplies for the kayaking segment of the trip. The power went out just as I unplugged my phone. When I stepped outside it appeared to be a town wide outage.

18 of today’s miles were due north, the others due west. It was more rolling farm country, often wooded or brushy in the ravines and creek bottoms. I passed a spot where hundreds of cows were being fed corn silage in troughs. Their tiny calves were neatly separated out behind them, most bedded and lounging, waiting for some milk. 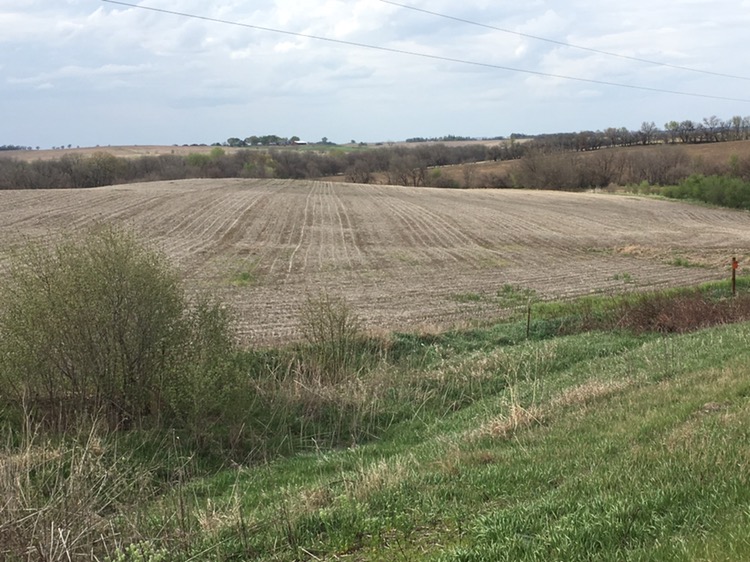 I heard some bobwhite quail whistling their name and later spotted three as they flew.

I’ve got about 2/3 of the food I need to make it to the next resupply in a couple more days. The route didn’t go through any little towns today, but three tiny ones are coming up that will hopefully have something.

I’d picked a camp spot on the aerial photo but when I got there found the road did not follow the route line. I scouted a second spot and decided to push on until I came to this bridge with rain looming, predicted through the night and tomorrow. There appeared to be a big flat area under the far side of the bridge. It looked great under there!  Not much traffic on the road above, perfectly hidden. Should keep my tent almost dry except for possible rain spray drift. I can get packed up under a roof!  Yes! 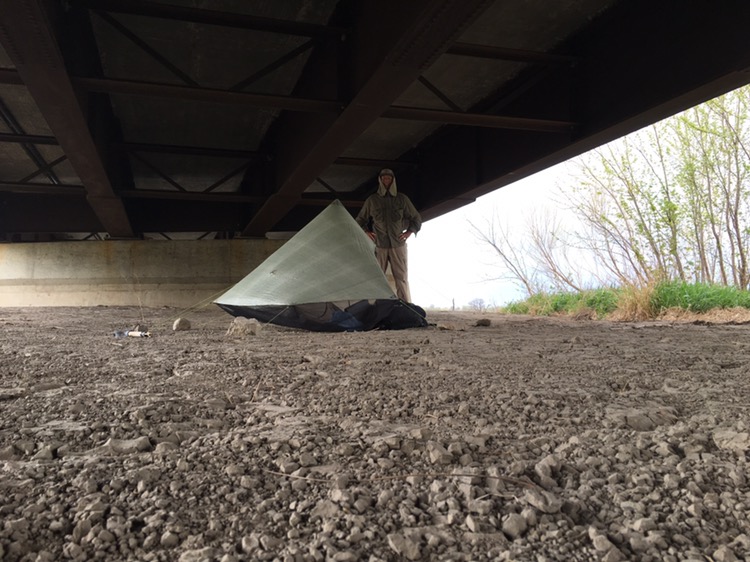 Camping under a bridge

My notes of the 13th of July by a Most unfortunate accident blew over Board in a Storm in the morning of the 14th obliges me to refur to the Journals of Serjeants, and my own recollection the accurrences…Passed an elegt Prarie in the 1st bend to the left. Containg a grass resmlg Timothy, with Seed like flax, (2) passed a Island in a bend to the S. S. at 12 ms. I walked on Shore S. S. lands, low & overflows, Killed two Goslings nearly Grown

…a Violent Storm of Wint from the N, E (passing over an Open plain, Struck the boat nearly Starboard, quatering, & blowing down the Current) the exerssions of all our Men who were out in an instant, aded to a Strong Cable and Anchor was Scrcely Sufficent to Keep the boat from being thrown up on the Sand Island, and dashed to peices the Waves dasthed over on the Side…I went out on the L. S. and observed two Elk on a land in the river, in attempting to get near those elk obseved one near us I Shot one.