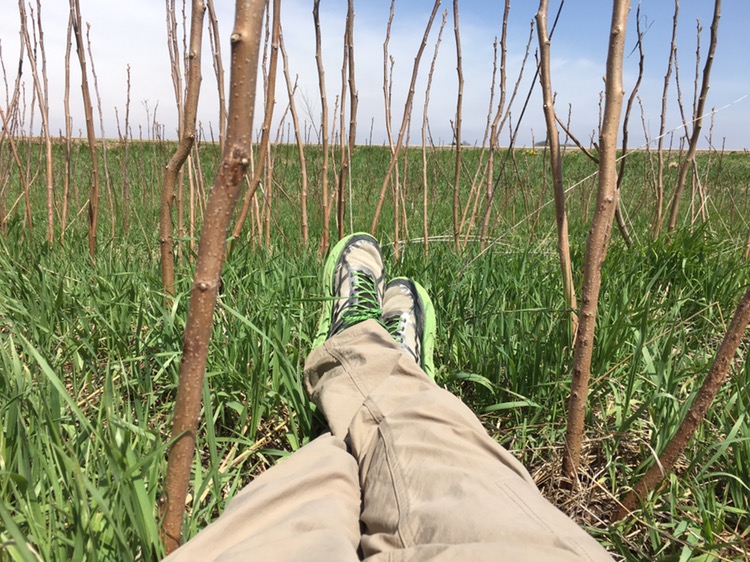 It was dewy in my camp near the pond. When I started walking to the main road a cottontail ran ahead of me, trapped between the pond on one side and a flooded ditch on the other. He stopped and looked at me, deciding I wasn’t a threat. He dashed right by me, white tail bouncing, heading for the brush.

Onawa had an open cafe. I asked for a table with an electrical outlet so I could do some charging. The waitress asked where I was walking and was very interested with lots of questions. I could hear her telling other people as she made the rounds. Many people wished me well as I left.

There are occasionally abandoned farmsteads along the way.  I have been puzzling about low concrete “bunkers.”  Root cellars? Or more likely tornado shelters in a place where basements would flood?

The gas station in Whiting had BBQ sandwiches. I’m in!  The guy at the counter said they’d recently gotten a rain of 2″ in 20 minutes. That sounded familiar. He also confirmed my tornado shelter theory.

The road to Sloan was straight as an arrow. I could see a giant grain elevator directly ahead for at least 5 miles.

A road grader had pulled sod up onto the shoulder so I was walking a spongy obstacle coarse whenever there was an oncoming car.

I was going to end up near Sloan at the end of my day, with a bad storm predicted. Two motels were full, but I found one with a room.

I grabbed a sub sandwich then headed to my room for a good cleanup, including laundry. The predicted storm arrived hit hard. Nice to be under a roof! Colter

August 3rd, Friday 1804 …made up a Small preasent for those people in perpotion to their Consiqunce. also a package with a meadile to accompany a Speech for the Grand Chief after Brackfast we Collected those Indians under an orning of our Main Sail, in presence of our Party paraded. Delivered a long Speech to them…

7th August Tuesday 1804 …at 1 oClock dispatched George Drewyer, R. Fields, Wm. Bratten. Wm. Labieche back after the Deserter reid with order if he did not give up Peaceibly to put him to Death

August 8th 1804…I saw a great number of feathers floating down the river those feathers had a very extraordinary appearance as they appeared in such quantities as to cover pretty generally sixty or seventy yards of the breadth of the river. for three miles after I saw those feathers continuing to run in that manner, we did not percieve from whence they came, at length we were surprised by the appearance of a flock of Pillican at rest on a large sand bar…The beak is a whiteish yellow the under part connected to a bladder like pouch…I measured this pouch and found it’s contents 5 gallons of water…

32 Mile Day, One Month On the Trail

Hey Bruce, sounds like a great adventure. Happened to stumble across your website. A long way from NR course at tech school in Brainerd , Mn. I’ll keep track of your progress. Bill

I bet you never dreamed I’d make it all the way to Iowa one day!

I hope to see you at another reunion one of these days.