These are journal entries from when I had no coverage. As of July 17, here is my latest post: https://bucktrack.com/lewis-and-clark-trail/portaging-the-great-falls/

July! March is starting to seem like a long time ago. It was another beautiful morning, sunny and calm. My goal for the day was James Kipp campground, about 18 miles.

There was easy paddling and hard paddling. When the wind came up it was gentle.  The river was relatively narrow again today. A hawk flew up from the riverbank, dropping something at the edge of the water. It was a baby rabbit, still warm.

The scenery was unusually nice. There were cottonwoods and sage/grass meadows. There were hills with pines and cedars and the first spruce, or perhaps fir, I’ve noticed. One of the few downsides is the riverbank tended to be very muddy. 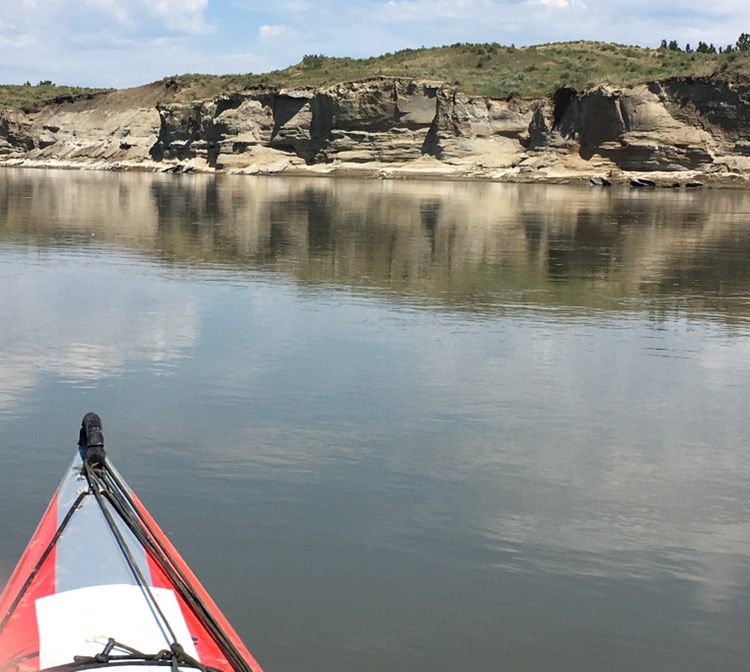 In the afternoon I found a nice landing spot and washed myself and my clothes. The river wasn’t too cold and the sun was hot.

When I arrived at James Kipp a fellow from Georgia was asking about my trip and gave me some tuna and crackers for the trip. Awfully nice of him! I carried all my stuff up to the campsite. No one was there which was nice. It immediately filled up with some locals though. Hopefully I’ll have a quiet night, but I wouldn’t count on it.

I walked up to the campground host trailer, and a sign directed me to another trailer, also with no sign of life. I know there are special regs up ahead and I need to know what they are.

Later in the evening there was still no one to get info from. I left a note saying where I was camping and what I needed. Hopefully in the morning I can find out. Colter

Clark: May 24th Friday 1805 a Cold night the water in the Small vestles frosed 1/ 8 of an inch thick, and the thermometer Stood this morning at the freesing point. we Set out at an early hour and proceeded on, at 9 oClock we had a Breeze from the S E which Continued all day. This Breeze afforded us good Sailing, the river rising fast Current verry rapid… a Creek falls in on the Lard. Side, opposit a large village of Barking Squirels… 13 miles higher up a Small river falls in on the Lard Side which is 40 yards wide and has running water. This Stream appears to take its rise in the South Mountains which is Situated in a Southerly direction 30 or 40 miles distant.

There were no rangers or campground host to be found. Their was a contact phone # but no coverage. The pay phone had been removed. The WIFI at the trailer was password protected. With no idea if anyone would even show up until Monday I finally decided to paddle upriver and hopefully find a ranger to give me the scoop without citing me for something I was inadvertently doing.

I started paddling. After an hour a flotilla of about seven canoes and kayaks passed. I was having to paddle like mad through an especially fast spot. They were dunking their paddles to keep their boats straight and going five times as fast.

There was plenty of tough paddling but some good rugged scenery. The wind was giving me a break so the heat was noticeable. When I’d start to dry out I’d splash water on my thighs and head and arms which helped a lot.

Because of my late start and the current by the time I’d come 17 miles I was done in. I landed near some shade trees, vital when the sun is still up, close to where L&C camped May 25, 1805. The mud was deep and sticky. I scouted around for a flat, shady spot. Suddenly I froze. Was that a rattler? There were leaves rustling just above my head. I looked carefully for a snake but couldn’t see one. When I moved I heard it again. Yup, rattler. I backed up and went around.

I found a nice shady spot and shuttled my stuff up after pulling my kayak completely out of the water. The rich light of the setting sun shone on the cottonwoods and hills across the river. Colter 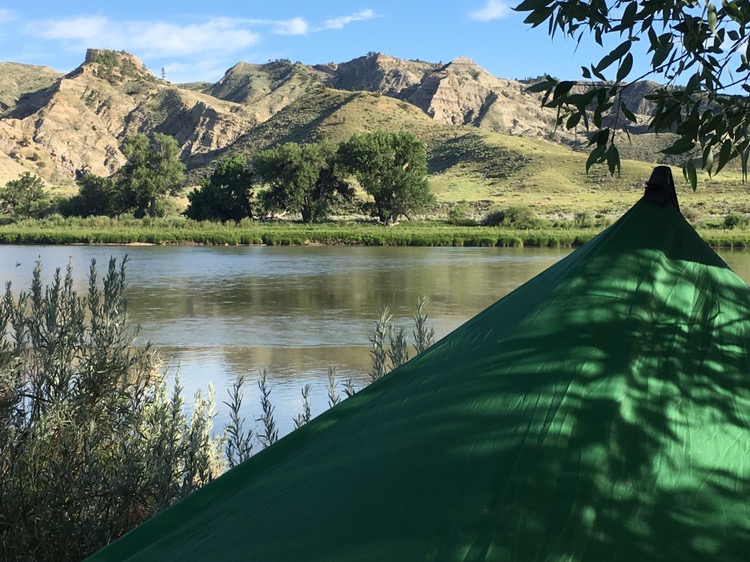 Lewis: May 25th 1805. The Two canoes which we left behind yesterday to bring on the meat did not arrive this morning untill 8 A M. at which time we set out; the wind being against us we did not proceed with so much ease or expedition as yesterday, we imployed the toe line principally which the banks favored the uce off; the courant strong particularly arround the points against which the courant happened to set, and at the entrances of the little gullies from the hills, those rivulets having brought down considerable quantities of stone and deposited it at their entrances entrances forming partial barriers to the water of the river to the distance of 40 or 50 feet from the shore, arround these the water run with great violence, and compelled us in some instances to double our force in order to get a perorogue or canoe by them. as we ascended the river today I saw several gangs of the bighorned Anamals on the face of the steep bluffs and clifts on the Stard. side and sent drewyer to kill one which he accomplished; Capt. Clark and Bratton who were on shore each killed one of these anamals this evening. The head and horns of the male which Drewyer killed weighed 27 lbs… the places they gerally celect to lodg is the cranies or cevices of the rocks in the faces of inacessable precepices, where the wolf nor bear can reach them and where indeed man himself would in many instancies find a similar deficiency; yet these anamals bound from rock to rock and stand apparently in the most careless manner on the sides of precipices of many hundred feet

There was some thunder and lighting, wind and rain last night but it wasn’t an issue. I got up about 4 AM to beat the wind. It’s nice to be out early on the river.

I stopped at lower Woodhawk Recreation area. One picnic table was covered with beer and liquor bottles. I was glad I didn’t camp there.
I paddled past a calm family of four beavers, eating and lounging in the morning sun. A mule deer came down to drink.

There were many long stretches of fast current from bank to bank. When it would get so shallow paddling was tough I’d get out and pull. Also very slow, tiring going with the water dragging at me feet and legs. When the wind came up the going was even harder. Sometimes I’d get a break with slower current or wind lulls, but this was one of the hardest days of the journey.

I was rewarded by some of the best scenery of the whole trip, cottonwoods and hills and dramatic badlands. It’s no wonder this is a popular paddle. I saw about a dozen canoes and kayaks. 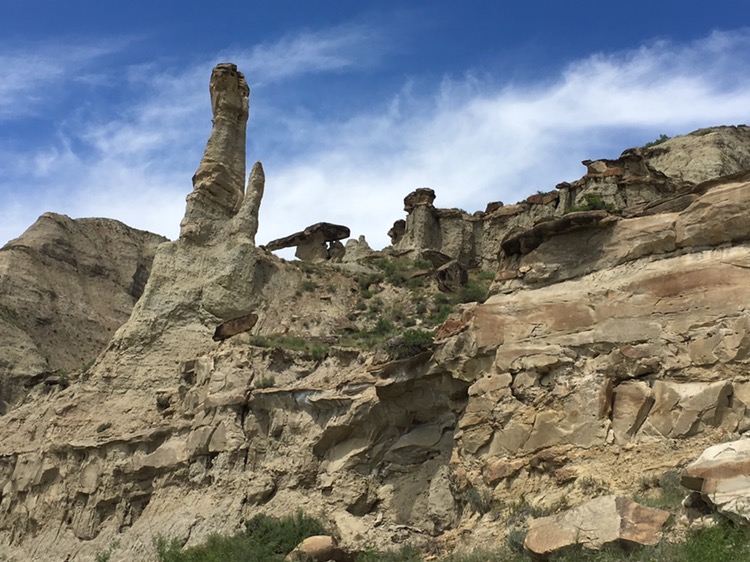 I took one pleasant break in some shady cottonwoods. At another stop a mule deer buck jumped up from his perfect, shady bed. I felt a little guilty taking his spot, but he’d soon reclaim it.

I crossed the spot where the Nez Perce forded on their way to Canada, and, like almost every day, passed Lewis and Clark campsites.

A long-legged, baby shorebird sprinted along the shore, tripped, and went end-over-end at least twice before a perfect recovery. As the sun got low a small flock of birds were taking baths at the edge of the water, each creating their own halo of spray.

I was focused on getting 20 miles, and it was nearly 8:30 when I achieved it. The light on the rugged hills was especially beautiful. I found a nice spot next to a willow, with several old log buildings on the flats above. A big mule deer buck ran when I went to check them out. 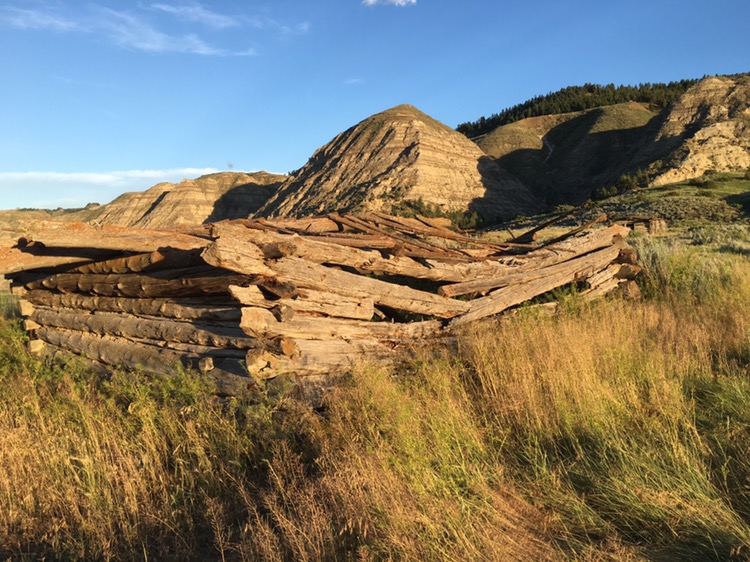 I cooked a batch of potatoes, with lots of margarine. It hit the spot. Rest and sleep will be wonderful. Colter

Lewis: Sunday May 26th 1805… In the after part of the day I also walked out and ascended the river hills which I found sufficiently fortiegueing. on arriving to the summit one of the highest points in the neighbourhood I thought myself well repaid for any labour; as from this point I beheld the Rocky Mountains for the first time… these points of the Rocky Mountains were covered with snow and the sun shone on it in such manner as to give me the most plain and satisfactory view. while I viewed these mountains I felt a secret pleasure in finding myself so near the head of the heretofore conceived boundless Missouri; but when I reflected on the difficulties which this snowey barrier would most probably throw in my way to the Pacific, and the sufferings and hardships of myself and party in them, it in some measure counterballanced the joy I had felt in the first moments in which I gazed on them; but as I have always held it a crime to anticipate evils I will believe it a good comfortable road untill I am compelled to beleive differently.