Race on the Trace, IOWA!

I got up early today to make sure I maximized my time to make it to the Lewis and Clark visitor center in Nebraska City no later than 2 PM, as it closed at 4 PM.

I still can’t believe that I actually spent the night at an actual trail shelter. It made packing up quick and easy with no tent to take down and all my gear nice and dry.
Most of the day’s hike was on the Steamboat Trace and it was some of the most pleasant walking of the entire trip. 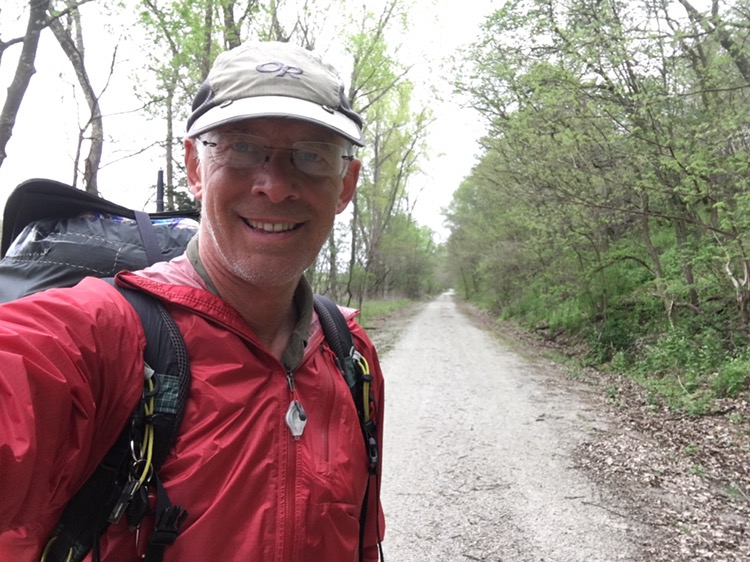 I didn’t run across another person on the whole trail. After about 8 miles I did run across one person next to the trail, his name was John Crook and he was a farmer. We had an interesting conversation about farming and flooding (lots) and pioneering. His family had pioneered that area in the late 1800s. I told him that this stretch of trail from Peru had the richest looking farmland I’d seen on the whole walk.

I saw the first black squirrel today and also the first butternut trees. It was 16 miles to the visitor center and I only sat down for a break once, arriving about 1230.

It was a beautiful visitor’s center with some very interesting displays showing the boats, medical equipment, animals they saw along the way, a full size Indian earthen home, and many other fascinating things. 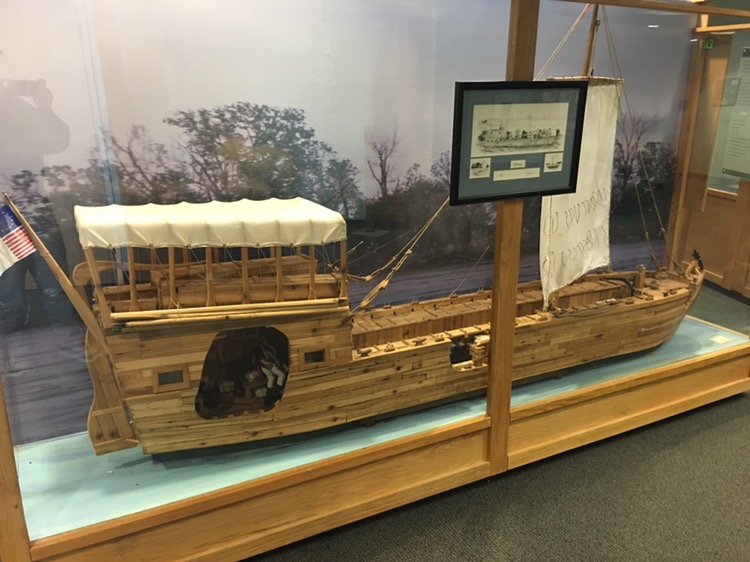 I had a long conversation with the museum director, Doug Friedli, who was another knowledgable and intelligent fellow with a wealth of information about L&C.

Shortly after leaving the museum I crossed the Missouri River once again into yet another state, Iowa. Another big landmark on the journey. As I crossed the long bridge I saw a boat going down the river which landed on the Iowa side. A Chesapeake  dog jumped out into the water and started running down the bank. A half a mile later when I was in Iowa he came charging down the trail straight towards me, wild with enthusiasm. Last I saw he was running wildly back to the boat again, his tongue streaming behind him.

Later I was laughing at myself for my poor map reading skills when I realized the confusion was a new road which didn’t appear on the map at all. It didn’t cause any serious difficulties and today I’m camped several miles into Iowa at the end of a good day. I did however have my tent completely set up and when I crawled inside discovered there were sand burrs on the ground, which were likely to puncture my inflatable air mattress. I took down my tent and moved it several hundred yards onto some grass. Less of a hassle than repairing a leaking mattress.

…proceeded untill a little before noon when we came too On the Lard. Shore opposite to the center of good Island where I observed the meridian altitude of O’s L. L. with Octant by the back observation, wich gave me the Latitude—40 ° 20′ 12″ N. I now set the Chronometer as near noon as this observation would enable me…

…Saw Some hand Som Countrey, the Creek near the high land is rapid and nearly as muddy as the river, & rising Gutrich caught two verry fat Cat fish G Drewyer Killed 3 Deer, & R Fields one, a puff of wind brought Swarms of Misquitors, which disapeared in two hours, blown off by a Continuation of the Same brees…

July 19th after breakfast which was on a rosted Ribs of a Deer a little Coffee I walked on Shore intending only to Keep up with the Boat, Soon after I got on Shore, Saw Some fresh elk Sign, which I was induced to prosue those animals by their track to the hills after assending and passing thro a narrow Strip of wood Land, Came Suddenly into an open and bound less Prarie, I Say bound less because I could not See the extent of the plain in any Derection, the timber appeared to be confined to the River Creeks & Small branches, this Prarie was Covered with grass about 18 Inches or 2 feat high and contained little of any thing else, except as before mentioned on the River Creeks &c, This prospect was So Sudden & entertaining that I forgot the object of my prosute and turned my attention to the Variety which presented themselves to my view