It was going to be a windy day in Chamberlain, and for most of the day it was.

I walked into town for breakfast and then headed over to the post office to pick up my new glasses.
“You should have a general delivery package for Bruce Nelson,” I said.
“I don’t think so, let me look,” the lady replied. She looked for it unsuccessfully.

I’d gotten a delivery confirmation so I stepped to the side to look it up. It had shipped UPS. UPS? General Delivery UPS? I walked to the UPS store but they don’t hold packages. After a lot of questions and phone calls I found out the package was in Mitchell, South Dakota and I could simply pick it up there, an hour drive away, or they could deliver it in Chamberlain sometime tomorrow, when I planned to be gone.

Such fiascoes are common when attempting to get a package delivered on an adventure like this. To be assured of delivery you should know the shipper and they need to know how to ship the package, and the receiver should “know the drill” as well. In famous trail towns like Damascus, Virginia or Cuba, New Mexico or Mammoth Lakes, California, the post offices and many businesses are accustomed to receiving General Delivery.

I messaged Norman Miller of the Missouri River Paddlers and he contacted Patrick Wellner in Pierre, and Patrick messaged me and said that he would be happy to receive my package for me.

I did laundry. No need to dry because hanging things in the wind dried them in no time. I also bought groceries and some miscellaneous other small supplies.

The wind blew hard all morning and throughout the afternoon. It wasn’t a day to sit at a picnic table and carefully sort through all of my gear. Any lightweight object had to be secured or it would immediately blow away. It was difficult to zip my tent door because of the wind pressure. Overall not a very relaxing day 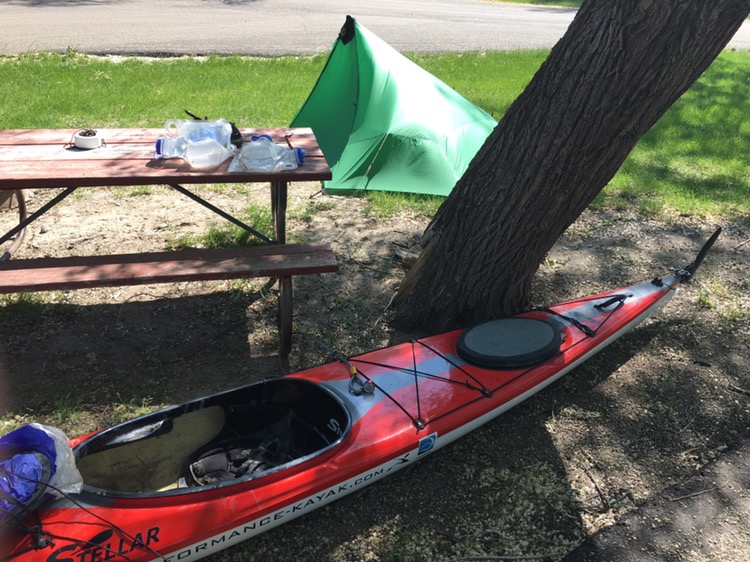 It was predicted to be very windy tomorrow as well, near sunset today the wind was predicted to subside. At about 7 PM the wind started decreasing and I started packing. Just about sunset the wind had died away nicely and I was packed up and ready to go.

I wish I had a photo as I paddled away from the campground against the sunset sky. I paddled for a point of land several miles away. A bright 1/3 moon and stars provided some light as it grew dark.

I could see the shore well enough to navigate. When I passed the point it grew very quiet. When I listened I could hear frogs, my paddle, and an occasional distant barking dog.

There was a stretch of river with steep bank and my kayak began to occasionally clunk into floating sticks. I turned on my headlamp. There were some  shallow spots and bushes sticking out into the river and sticks sticking up from the riverbottom. There was fog in the beam of my headlamp. Several times I spotted large raccoons hunting along the riverbank. An animal emerged out of the water maybe 15 feet from my boat and swam towards me for a bit before diving. It must’ve been a muskrat but it looked too shaggy and too big to be a muskrat, it look like a nutria, but unless it was an escapee I doubt there’s any living around here.

It was getting really chilly out and approaching midnight. I’d done nearly 10 miles. It was time to get off the river.

When I spotted a landing place I stopped to explore. Likely tomorrow I would be hunkered in this camp all day escaping the wind. Luckily I found a bluff just about the height of my tent, downwind of some trees, a very good spot indeed for a windy day.

It was cold and damp and dark and I was tired and anxious to get camp built as soon as possible.

My tent set up, I pulled the kayak out of the water and hid it amongst some bushes, tying it off just for insurance. I crawled into my warm sleeping bag just after 1230. Colter

Lewis: Sunday September 16th 1804…we concluded to ly by at this place the ballance of this day and the next, in order to dry our baggage which was wet by the heavy showers of rain which had fallen within the last three days, and also to lighten the boat by transfering a part of her lading to the red perogue, which we now determined to take on with us to our winter residence wherever that might be…vast herds of Buffaloe deer Elk and Antilopes were seen feeding in every direction as far as the eye of the observer could reach.

Lewis: Monday September 17th 1804…I do not think I exagerate when I estimate the number of Buffaloe which could be compreed at one view to amount to 3000…we found the Antelope extreemly shye and watchfull…I had this day an opportunity of witnessing the agility and superior fleetness of this anamal which was to me really astonishing…I beheld the rapidity of their flight along the ridge before me it appeared reather the rappid flight of birds than the motion of quadrupeds.

Clark: 17th of Septr…Colter Killed a Goat, & a Curious kind of Deer, a Darker grey than Common the hair longer & finer, the ears verry large & long a Small resepitical under its eye its tail round and white to near the end which is black & like a Cow in every other respect like a Deer, except it runs like a goat.

Clark: September 18th Tuesday 1804…the hunters Killed 10 Deer to day and a Prarie wolf, had it all jurked & Skins Stretchd after Camping I walked on Shore Saw Goats, Elk, Buffalow, Black tail Deer, & the Common Deer, I Killed a Prarie Wollf, about the Size of a gray fox bushey tail head & ear like a wolf, Some fur Burrows in the ground and barks like a Small Dog.

[Note: I have updated the prior two days posts.] A windy day was predicted today and tomorrow as well. I was something like 22 miles from Chamberlain. With a couple hours of paddling every morning until the wind comes up I might not make it until the third day. So close!

So this morning I got up at 3 AM and got paddling as soon as I could. Good thing I had a bright headlamp because I needed it. It had a good strong beam allowing me to make sure I was staying reasonably close to the shore. Once I saw two sets of big green eyes watching me from the shore, a doe and a fawn,  I’m sure. It was eerie paddling in the dark out on the big water.

It starts getting light enough to see a bit long before sunrise. It was nice when I could begin to barely see the cliffs and trees lining the shore so I could cut across the moderately sized coves.

After three hours or so I was looking for a break but I decided to wait until I got to some trees that I could see up ahead. But when I got there they were flooded and there must’ve been 2 miles or so of shoreline flooded like that. At long last I had a chance to land and stretch my legs. I checked my position and looked at the map and saw that I only had about 10 miles left to get to Chamberlain. 10 miles! The wind was supposed to come out of the Northwest when it hit so if I could make it around the next corner and then hugged the shore for wind protection I should be able to make a dash into Chamberlan. If the wind would only hold off for another hour and a half or so.

I got back in the boat and begin to paddle steadily. For a long way beautiful cliffs lined the shore. Up ahead I could see Chamberlain. With any luck at all I was going to make it. That I felt the strong puff of wind. Here it comes!  But it was coming from behind me blowing me straight towards Chamberlain. 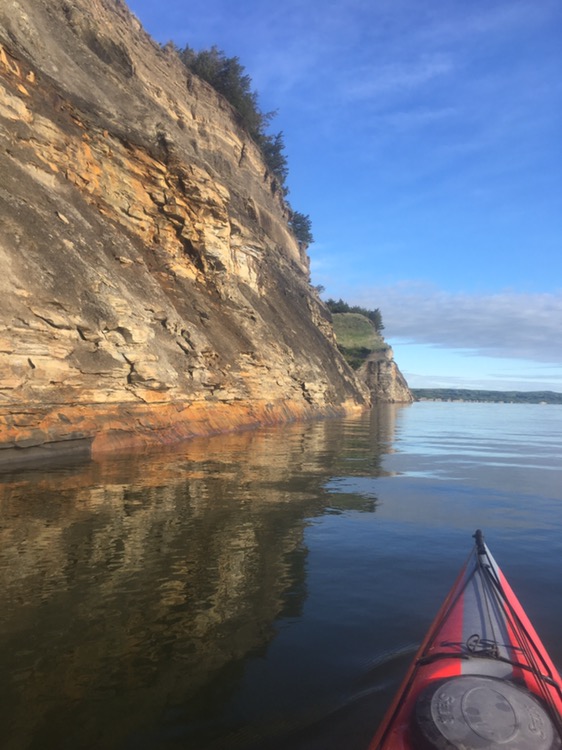 I was 5 miles out.  So should I strategize for the wind I have or for the wind I expect?  I decided to run with the wind I had and if it started change, plan accordingly. There were both practical and safety issues to consider.  I sailed for a bit and then picked up a paddle and dug in. I committed for the Chamberlain shore: if the wind changed to from the west and the waves got too big I could just land. I was getting tired but I couldn’t stop. I wanted to make sure I made it before that hard west wind hit.

It was a big relief to finally land at the American Creek Campground. I asked about a campsite and went to check out the tenting area. That cold hard wind was hitting there pretty good and having just escaped it I wanted to avoid it if possible. They were kind enough to let me look around for a better spot and I chose an RV spot somewhat protected by trees.

I could either do a long portage to my camp spot or paddle my kayak nearer. In the meantime however the wind had came up more. I should’ve either portaged or I put on the spray skirt for the kayak. The waves coming sideways were asking for trouble. If I swamped it would be a cold, frustrating, embarrassing swim to the nearby shore.

Luckily I made it and carried my stuff over to camp and locked my kayak to the picnic table. The wind threatened to blow away every unsecured lightweight object.

I was spent. A big wind is predicted for tomorrow as well. I’ll take a wind day. With plenty of time to get my chores done tomorrow I pretty much just ate and puttered around.   I sure am glad to have barely beat the wind to Chamberlain! Colter

Lewis: September 13th Killed a bluewinged teal and a Porcupine; found it in a Cottonwood tree near the river on the Lard. Shore—the leaves of the Cottonwood were much distroyed—as were those of the Cottonwood trees in it’s neighbourhood. I therefore supposed that it fed on the folage of trees at this season, the flesh of this anamal is a pleasant and whoalsome food—the quills had not yet obtained their usual length—

Clark: Septr 14th Friday 1804 I walked on Shore with a view to find an old Vulcanio, Said to be in this neighbourhood by Mr. J. McKey of St. Charles. I walked on Shore the whole day without Seeing any appearance of the Villcanoe, in my walk I Killed a Buck Goat of this Countrey, about the hight. of the Grown Deer, its body Shorter, the Horns which is not very hard and forks 2/ 3 up one prong Short the other round & Sharp arched…he is more like the Antilope or Gazella of Africa than any other Species of Goat. Shields Killed a Hare like the mountain hare of Europe, waighing 6 1/ 4 pounds (altho pore) his head narrow, its ears large i, e, 6 Inches long & 3 Inchs wide…

15th September Satturday 1804…Camped on the S. S. opposit the mouth of a large Creek on which there is more timber than is usial on Creeks of this Size, this Creek raised 14 feet the last rains. I killed a Buck Elk & Deer, this evening is verry Cold, Great many wolves of Different Sorts howling about us. the wind is hard from the N W this evening