I am halfway to the Pacific Ocean, having passed 1,661 miles today. It is a big landmark on this journey. I’ve now paddled up the Missouri River farther than I’ve backpacked.

I got a bit of a late start yesterday, (meaning I left about 7:15 AM) and I needed the extra rest. Doing 20 miles upstream is just about the max given the recovery time I need to do it again the next day.

It was a sunny morning and the rooster pheasants were growing continuously, about once every three seconds by my count.

There was enough wind to be a significant issue today. With all the bends in the river, sometimes the wind was a big hindrance and sometimes it was actually a help. Overall it made the paddling much tougher however.

There were many fuzzy baby wood ducks paddling along the riverbank with their mothers. The most amusing encounter is when a large group of them went scrambling up a steep sandy riverbank, when I passed them they went running back down to jump in the water and most of them lost their footing and went rolling down the bluff into the water, alternating gray and yellow fluff as they tumbled.

At about 6 PM I was tuckered out and looked for a camp spot but couldn’t find anything serviceable until 7 PM. As I begin unloading the boat I noticed a storm approaching. I picked a spot partially protected by tall grass and sparse willows.

About 10 PM the rumble of thunder started and as it began to get dark there was a steady flicker of lightning. Rain began pattering and the wind began to blow. It started to rain and blow harder and harder. When it became violent I knew that something was going to give. I sat up and held the tent pole to ease the strain on the stakes. A piece of hail bounced off the fly, followed by another and another with increasing frequency, marble sized hail. The hail grew in size until it seems as if it would start pounding through my tent fly. I had thought about what I would do if I got in really big hail and I put that plan into action by getting underneath my sleeping pad. When I peaked out and looked in the flashes of lightning I didn’t see any holes in my shelter. I wondered how the fuzzy wood duck  chicks had fared. Hopefully they were under some cover. 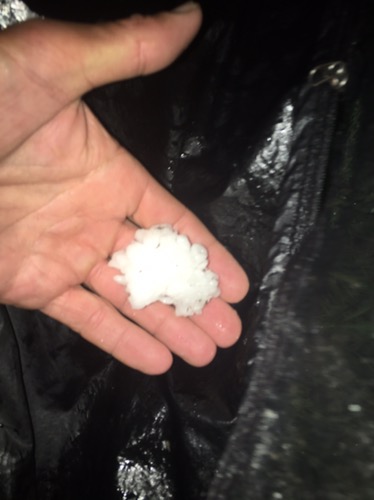 The wind started to let up and the hail stopped. The rain slowed down to a breeze. I went outside in my underwear to assess damages. The tent was fine with one loose stake. My kayak was also OK. It was one of the most violent storms I have been in in a tent, luckily it only lasted a few minutes and I was none the worse for wear. In this mild weather the worst that would’ve happened is I would’ve been miserably wet. Colter

Lewis: May 1st 1805. Set out this morning at an early, the wind being favourable we used our sales which carried us on at a good pace untill about 12 OCk. when the wind became so high that the small canoes were unable to proceed one of them which seperated from us just befor the wind became so violent, is now lying on the opposite side of the river, being unable to rejoin us in consequence of the waves, which during those gusts run several feet high. we came too on the Lard. shore in a handsome bottom well stocked with cottonwood timber; here the wind compelled us to spend the ballance of the day. we sent out some hunters who killed a buffaloe, an Elk, a goat and two beaver. game is now abundant. the country appears much more pleasant and fertile…