Sunday evening I camped on the grassy bank of the Jefferson River. In the middle of the night I woke up. With no tent over me the Milky Way swept across the sky, crossed by the bright streak of a meteor.

I’d walked about 22 miles on Sunday, not too bad on a hot day and being partially out of hiking shape.

As soon as it started getting light I began packing. Dawn comes over an hour later now compared to eastern Montana, hundreds of miles way, and now weeks after the solstice. It was chilly, I wore both my jacket and balaclava.

Lewis and Clark Caverns was a well developed park but I was there hours before opening. Instead I filled my water bottles at the campground and kept walking.

There was a huge amphitheater-like cave down the road a way. I hiked up a drainage and then up and over a ridge to check it out the cave. On the way back I spotted a small cave that went all the way through the bottom of the ridge, a shortcut back to the road. I had to crawl through it.

The canyon along the Jefferson was beautiful, with the steep cliffs, mostly still in the shadows, with the road running between the cliffs and the river. 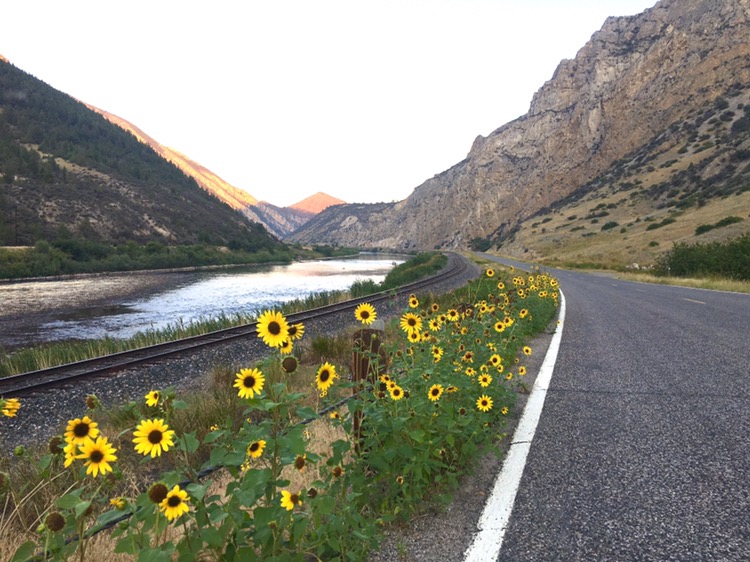 I was surprised to see a black bear walk out of the willows and along the river. When he heard a car coming he melted into the willows where he appeared to be eating some kind of red berries.

There was very little traffic. Deer fed or watched me from their beds. Somehow in all the years I’d visited this area I’d never been down this very scenic road.

There wasn’t much left of the town of LaHood Park except for an old, giant, shaggy white dog who greeted me with mild interest before crossing the road to lie in the shade where he could watch the world go by.

At Cardwell I got a large coffee and a breakfast sandwich, breakfast burrito and a Dove Bar. What a treat.

For the rest of the day I was in familiar country I’d seen many times fishing with Jim Griffin. There were wonderful views of the Tobacco Root and Highland Mountains.

There were many shady ranch houses along the way with irrigated hay fields with stacks of huge bales. There were also considerable stretches of shadeless road, a considerable factor on this increasingly hot day. 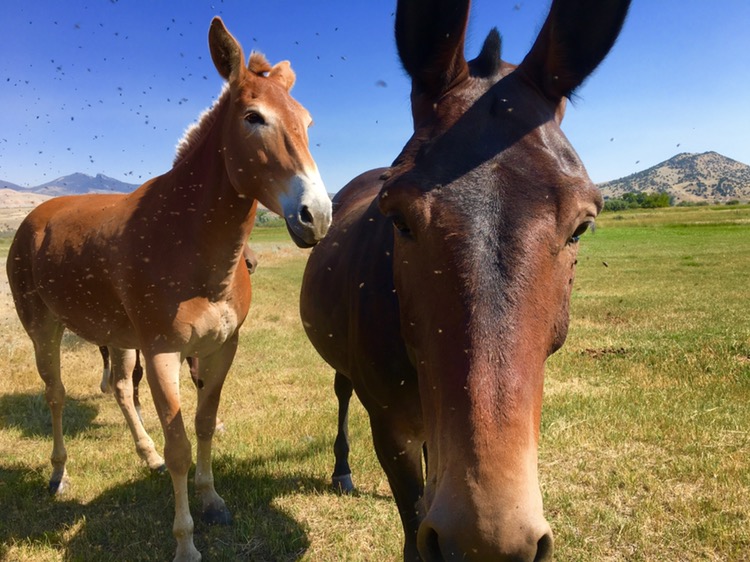 I paused on a bluff, high over the Jefferson, a spot members of the expedition surely stood, as well as numerous Indian tribes for thousands of years. 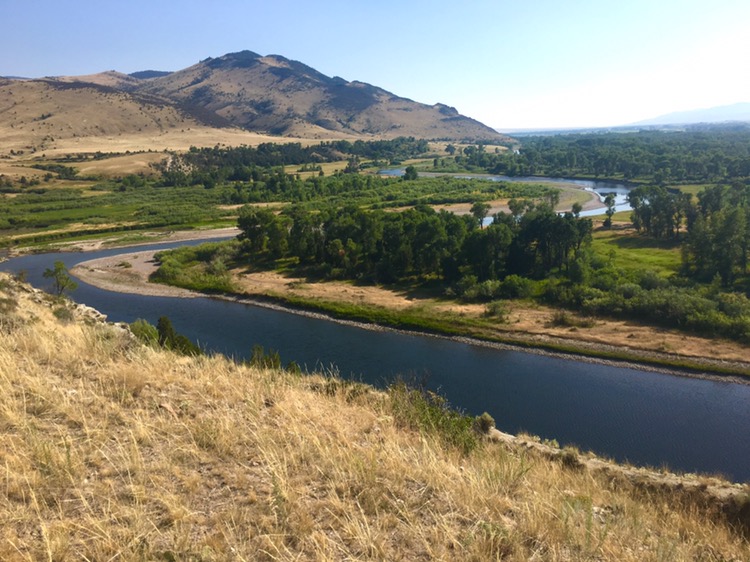 Bluff over “The Jeff”

A rancher drove up from behind me with an ATV with two cattle dogs in the back.

“Are you hiking the Continental Divide Trail?”

“Do you need anything? Water maybe?”

We had a good chat. His was a well known name with a road and bridge named after the family. He told me about an Indian cave I could access from his land, as well as some tipi rings.

I got two quarts of river water, filtered one and climbed up to the cave, a steep hike on this hot afternoon. There were several red pictographs, including a man and a track from a sandhill crane or similar bird. There was also modern names scratched onto the walls dating back to 1914, at least. 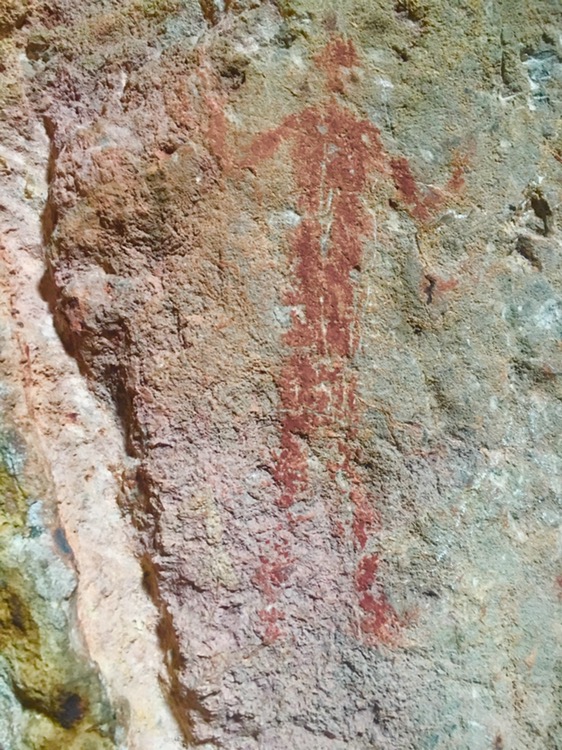 Pictograph of a man

I ended up sleeping on a trail on the mountainside. It was quite comfortable, actually. There was a nice orange sunset over the Highlands, with backlit irrigation water, and fields and cottonwoods. Colter

Lewis: August 1st 1805 At half after 8 A.M. we halted for breakfast and as had been previously agreed on between Capt. Clark and myself I set out with 3 men in quest of the Snake Indians. the men I took were the two Interpreters Drewyer and Sharbono and Sergt. Gass who by an accedental fall had so disabled himself that it was with much pain he could work in the canoes tho he could march with convenience… our rout lay through the steep valleys exposed to the heat of the sun without shade and scarcely a breath of air… I found myself almost exhausted before we reached the river. I felt my sperits much revived on our near approach to the river at the sight of a herd of Elk of which Drewyer and myself killed two. we then hurried to the river and allayed our thirst…

Jim and I arrived at Three Forks at 6:30. After a few photos we said our goodbyes and I headed down a bicycle trail towards Three Forks.

It was cool and pleasant and green with beautiful morning light. Two horses walked over to the fence to greet me. Bobwhite quail ran across the road.

In Three Forks I happened to walk past a grocery store. While on adventures like this grocery stores and restaurants are hard to pass up. Although I already had breakfast two hours ago I ate a quart of strawberry yogurt.

Just short of the first bridge across the Jefferson was the Druilliard fishing access. The most successful hunter on the Lewis and Clark expedition, he came up to the Three Forks area several years later to  guide and trap and was killed and mutilated by Blackfeet, but not before killing two Blackfeet himself.

Later I walked somewhere near the place where, in 1809, my namesake John Colter and another member of the Lewis and Clark expedition named John Potts, were surrounded by a large group of Blackfeet. Blackfeet grabbed Potts’ rifle but Colter grabbed it back and handed it to Potts.  Ordered to come ashore, Potts refused and was shot and wounded. He shot a threatening Blackfoot dead, at which point Potts was riddled with bullets and arrows, then hacked to pieces.
Colter was stripped naked and told to run for his life. After a short head-start the young braves took off after him. One by one he outdistanced them until a lone warrior was behind him.  The Indian tried to spear Colter but Colter wrested it away from him and drove the spear through him and into the ground. He grabbed the Indians blanket and the now half spear and outran the other Blackfeet until he got to the Madison River, where he hid in a log jam while the Indians searched for him. At one point they were standing right above him. The next day he started a 200-300 mile walk alone to Fort Raymond. That was just one of his many adventures in the Rockies. 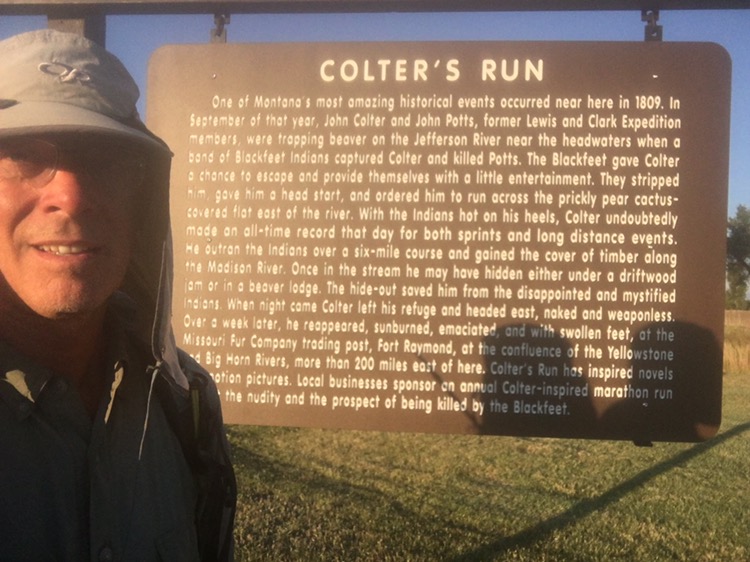 Back in the present, the day grew increasingly warm and although the scenery was spectacular: mountains, the Jefferson River, fields; the lack of shade made for some hot walking. There was also a moderate amount of traffic and narrow shoulders so I had to repeatedly step off the road for safety reasons.

I spotted a fly box along the road. I opened it up and it was full of high-quality fishing flies, valuable to a fly fisherman like me! There was a phone number inside the box offering a reward if found. I would’ve rather had the flies but obviously I was going to give the box back if I knew who owned it. I gave the guy a call and told him where I was.

“Tell you what, rather than a reward why don’t you buy me a big bottle of cold Pepsi.”

An hour later he tracked me down along the road. He was delighted to get his box full of hand-tied flies back and I was just as happy to get a large cold Pepsi and a large bottle of cold water and a great Wheat Montana turkey sandwich. Win-win!

I walked a couple more miles then sat out the heat for a long break, resting in the shade of an Ennis/Yellowstone Park/Lewis and Clark Caverns sign. 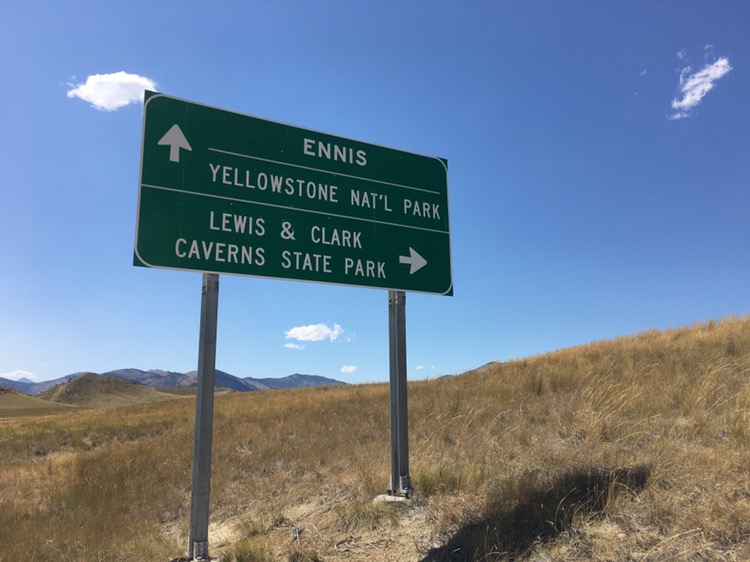 I’m going to post this now because I expect to lose coverage as I head into the canyon along the Jefferson River where I’ll camp. The traffic should drop off when 287 splits off from Hwy 2 in 30o yards. Colter

Lewis: Tuesday July 30th 1805. Capt. Clark being much better this morning and having completed my observations we reloaded our canoes and set out, ascending Jeffersons river. Sharbono, his woman two invalleds and myself walked through the bottom on the Lard. side of the river about 41/ 2 miles when we again struck it at the place the woman informed us that she was taken prisoner. here we halted untill Capt. Clark arrived… [Lewis was scouting and got separated from the Corps] I found a parsel of drift wood at the head of the little Island on which I was and immediately set it on fire and collected some willow brush to lye on. I cooked my duck which I found very good and after eating it layed down and should have had a comfortable nights lodge but for the musquetoes which infested me all night. late at night I was awakened by the nois of some animal runing over the stoney bar on which I lay but did not see it; from the weight with which it ran I supposed it to be either an Elk or a brown bear. the latter are very abundant in this neighbourhood. the night was cool but I felt very little inconvenience from it as I had a large fire all night.

Lewis, July 31, 1805…This morning I waited at my camp very impatiently for the arrival of Capt. Clark and party; I observed by my watch that it was 7 A.M. and they had not come in sight. I now became very uneasy and determined to wait until 8 and if they did not arrive by that time to proceed on up the river taking it as a fact that they had passed my camp some miles last evening. just as I set out to pursue my plan I discovered Charbono walking up shore some distance below me…