It was a steep descent into Idaho with the Lemhi Range in front of me. It wasn’t long before I was seeing plants I couldn’t remember seeing before on this journey.  For example I saw what I think was Mountain Maple, some new types of gooseberry, and other plants I don’t you know the names of.  For the first time on this trip but I actually ate quite a few berries, including raspberries, two types of gooseberries and chokecherries.

One of the very few cars driving up the mountain, perhaps the only one I saw, stopped to warn me about rattlesnakes, and I actually did see one very small rattlesnake on the way down, which I shooed off the road.

As usual I camped next to running water, but this time the running water was on its way to the Pacific Ocean.

Was a nice cool morning with some clouds in the sky. 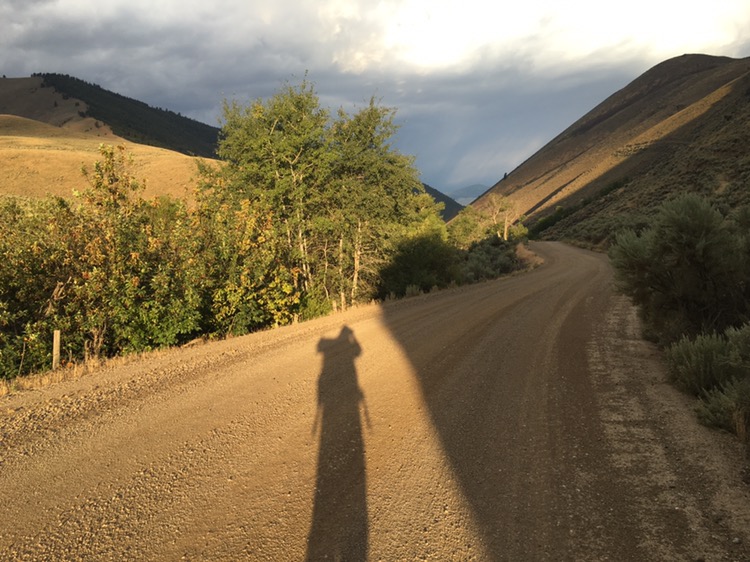 After a couple miles of walking I came to a beautiful campground.  I almost always like to camp at my own spot but had I known about this place I probably would’ve walked the extra 2 miles to make it there last night. It had beautiful, thick, green, mowed grass, picnic tables, only one other camper, an out house and historical signs. The most interesting tidbit these signs shared was that at this spot Lewis and his small advance scouting party had eaten a piece of salt pork that they had obviously hauled all the way from St. Louis! Think of the effort it took to haul that meat up all those countless rapids, over the long Great Falls portage and even up Lemhi Pass.

The sky got dark and it began to rain. Usually rain isn’t a backpacking favorite but with that big fire 100-some miles ahead of me I’m hoping for widespread rains to help control existing fires and prevent new starts.

Storms rolled through several times today, some with significant amounts of lightning, and I put on and took off my rain gear a bunch of times. Some of the rains were nice wetting rains and it looked like the big fire north of me in the Bitterroot Valley must of gotten some rain, which is good news.

I was walking by the tiny Tendoy school and noticed a water hydrant. I went over there and checked, and it worked! There was a lot of rust at first but when it cleared I topped off 3 quart bottles.

For miles I walked a nice quiet gravel side road.  I could see snow on mountains just to the south of me for a while, and later on I could see the snowiest mountain tops I’ve seen yet, to the north.

I walked past many Angus cattle, whitetail deer here and there, and sandhill cranes feeding in hayfields. 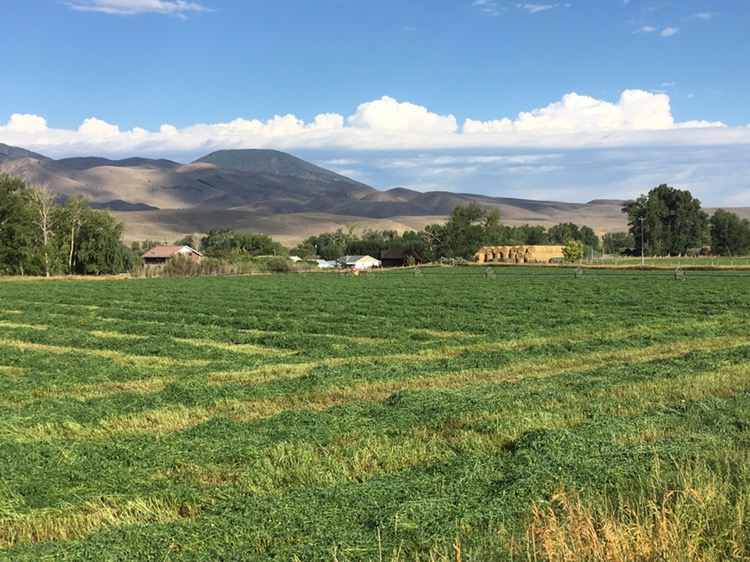 I unexpectedly came upon a marker showing the approximate place where Sacajawea had been born. Can you imagine her walking through this country of her childhood, a place she thought she would never see again, and a place she would soon be leaving once more.

Eventually I angled over to Highway 28. The most unusual thing I noted was the many deer that had been hit by cars. It’s a shame there isn’t some way to prevent it from happening.

Once I had done 20 miles it was still only about 530 but another black storm was looming and I knew it might be tough finding camping spots near Salmon. I started watching for camp spots and found a nice hidden place along the Lemhi river. It’s a great change of pace walking instead of paddling, and it’s especially nice to be walking through such beautiful country. Colter

Clark: August 17th Satturday 1805… The Great Chief of this nation… is a man of Influence Sence & easey & reserved manners, appears to possess a great deel of Cincerity. The Canoes arrived & unloaded—every thing appeared to asstonish those people. the appearance of the men, their arms, the Canoes, the Clothing my black Servent. & the Segassity of Capt Lewis’s Dog. we Spoke a fiew words to them in the evening respecting our rout intentions our want of horses &c. & gave them a fiew presents & medals—we made a number of inquires of those people about the Columbia River the Countrey game &c. The account they gave us was verry unfavourable, that the River abounded in emence falls, one perticularly much higher than the falls of the Missouri & at the place the mountains Closed So Close that it was impracticable to pass, & that the ridge Continued on each Side of perpendicular Clifts inpenetratable, and that no Deer Elk or any game was to be found in that Countrey, aded to that they informed us that there was no timber on the river Sufficiently large to make Small Canoes…
Lewis: Monday August 26th 1805… I found Colter here who had just arrived with a letter from Capt. Clark in which Capt. C. had given me an account of his peregrination and the description of the river and country as before detailed from this view of the subject I found it a folly to think of attemping to decend this river in canoes and therefore to commence the purchase of horses in the morning from the indians in order to carry into execution the design we had formed of passing the rocky Mountains. I now informed Cameahwait of my intended expedition overland to the great river which lay in the plains beyond the mountains and told him that I wished to purchase 20 horses of himself and his people…