The river didn’t give me any free miles today, but that’s to be expected when you’re paddling upstream.

I passed many broods of young goslings and ducks. I’d often paddle out into the river a way to reduce panic.

There was a group of young guys jumping in the river and doing a bit of partying. They said they were from the Fort Peck Reservation, addressed me as “sir”and asked a bunch of questions about my trip as I paddled, wishing me well.

A mule deer buck was feeding in the willows, already with tall forked, velvet-covered antlers. He walked down to the river bank curious to see what I was before bounding away.

There seemed to be considerably less slow current to take advantage of today, and a fairly consistent headwind as well. Long sandbars were common and I was often paddling back-and-forth across the river looking for a way around them. I’d paddle until I got tired and then take a break, then repeat, throughout the long, sunny day.

In the evening I was looking into the low sun and could see sparkling water droplets falling into the river from about 3 feet high. When the angle got better so I could see, it was a white tailed deer with water dripping from its nose.

Later I came around a corner and, looking into the bright light of the evening sun saw what looked like a person standing on the edge of the river. An eagle lifted its wings and took off from a driftwood stump.

I probably made about 22 miles today, solid progress given the conditions. At the end of the day I was paddling to reach a stand of cottonwoods to camp in but the bank was too steep. I camped instead among the willows, with far less, and far less aggressive, mosquitoes than there were at the confluence of the Yellowstone. Pheasants crowed all around me. Colter 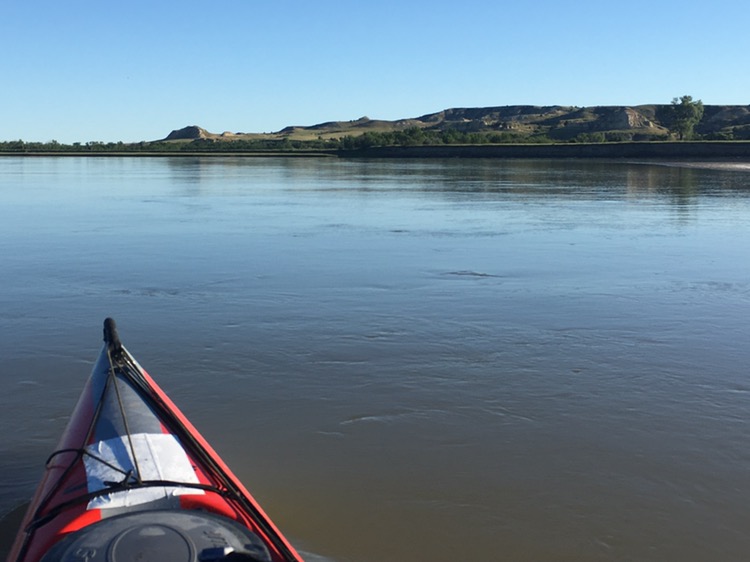 Morning on the Missouri

Clark: 30th of April Tuesday 1805 The wind blew hard from the N E all last night, we Set out at Sunrise the wind blew hard the greater part of the day and part of the time favourable, we did not lie by to day on account of the wind I walked on Shore to day our interpreter & his Squar followed, in my walk the Squar found & brought me a bush Something like the Current, which She Said bore a delicious froot and that great quantites grew on the Rocky Mountains… The bottoms above the mouth of the last river is extensive level & fertile and covered with indifferent timber in the points, the up land appear to rise gradually, I saw Great numbers of Antelopes, also Scattering Buffalow, Elk, Deer, wolves, Gees, ducks & Grows—I Killed 2 Gees which we dined on to day Capt Lewis walked on Shore and killed an elk this evening, and we Came too & camped on the S. S the Countrey on both Sides have a butifull appearance.