The river was peaceful this morning. The winds were very light, and at times it was nearly calm, a beautiful day for paddling. 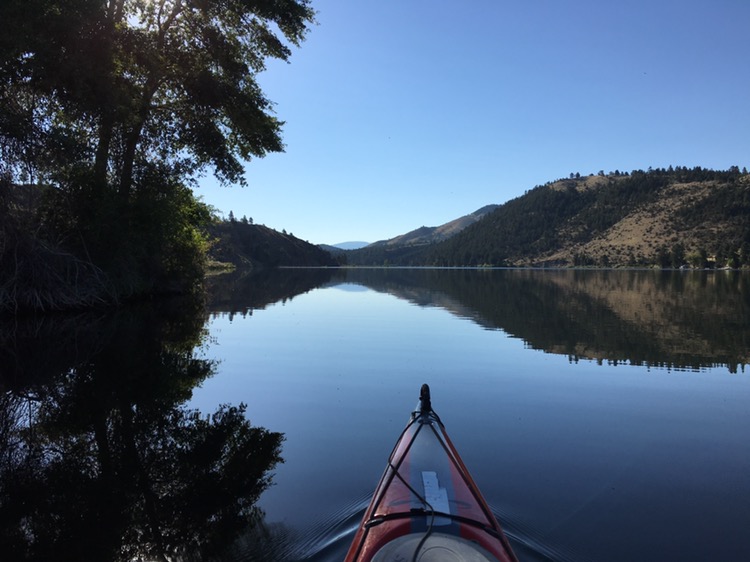 The towering Canyon Ferry Dam was an imposing site when I came around the corner. What an incredible feat of engineering a dam like that represents.

The Riverside Campground had a perfect spot to land a kayak or canoe, a very gentle incline leading up to grass. It was easy pulling my boat up onto the grass without gouging it on sharp rocks.

As I took my cart out and put it together I noticed a sign saying that the portage for Hauser Dam is on the northeast side, the opposite side from where I portaged. I was working with old information and that likely explains why the terrain was so difficult in places.

I filled up my water bottles, threw out my trash, and headed up paved road. It was very easy pulling, amid the sweet smell of  warm Ponderosa and cedars. I saw two hen turkeys with their chicks.

Just past a Y at the top of the road was a nice covered area with tables where I sat enjoying a shady break.

After a while I started down the road towards the boat landing. There was a less than ideal spot with no shoulder on either side, so I hustled through it keeping an eye up and down the road making sure the cars could see me.

Ahead I could see the turn off for the boat landing; also there were a big “Road Closed” sign and a sheriff’s pickup. I didn’t like to see that.

I pulled my kayak off to the side and looked at the lady sitting in the pickup but she wasn’t looking at me. Obviously I needed to come up with some plan and she would be the one to talk to. I thought it was quite likely that, since I was on foot, they would just let me launch the boat anyway.

Since I couldn’t seem to get her attention, I stepped over the yellow tape, walked about five steps to her pickup and said hi.

“Get back over the tape!” She snapped. I did.

I finally got her to talk. They were doing a drowning recovery. I needed to go elsewhere. Seems like she could have acknowledged my existence and started with that information.

I turned around and went down that same sketchy section of road and scouted around until I found another workable lake access.

I ended up paddling right through the search area. A young guy had been attempting a midnight ride across the lake on his modified motorcycle. Apparently he’d done it once before during the daytime.

Once past the somber search area it was pleasant paddling, with nice scenery and only a light wind. There were also very few boats, including one magnificent sailboat with a huge sail, that looked like fun even on a day like this with light winds. 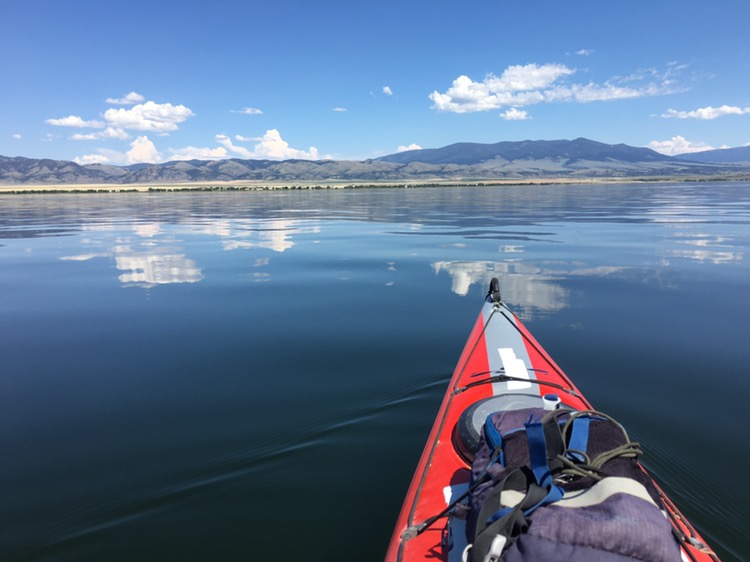 I paddled a steady four miles-an-hour, taking breaks as needed. A dark rain storm was hanging over the mountains to the west but slowly moving my way. I checked the weather once more and it assured me that the winds would be light the rest of the day with sun until late with no mention of rain. It didn’t look that way to me but I often guess wrong.

I’ve been shooting for 30 miles but the storm was rumbling and dark clouds were now right over my head. Along the shore were cove after cove of nice looking little campsites. I decided to hedge my bets and call it a day about 6 o’clock after maybe 27 miles. Considering I’d also done a portage and a half it was a full day anyway.

My campsite had a gentle gravel beach, a  fire ring that I would not be using, and a nice flat spot under green ash trees. As I was unloading the boat I noticed there was now a gentle tailwind. It was hard to be ashore under such a perfect paddling conditions.

About 730 the situation changed dramatically, a very strong west wind arose, one of the strongest winds of the journey. I checked the boat once again to make sure all light items were fastened down and that the boat itself was tied properly. It would be very, very, risky to be out at the lake right now. Big white caps swept eastward with violent gusts of wind blowing spray off the tops.

The most amazing thing of all were the big fish jumping just offshore. At first I thought that they were excited by the sudden change in weather. But observing them, it appeared they were primarily surface feeding. That made sense because there was a big hatch of some kind of insects going on. Also there were surely thousands of insects like grasshoppers being blown off the bluffs. It might’ve been the fishing opportunity of a lifetime. Or, maybe they wouldn’t have bitten at all. It was a remarkable sight regardless. Colter

Clark: July 21st Sunday 1805 a fine morning our feet So brused and Cut that I deturmined to delay for the Canoes, & if possible kill Some meat by the time they arrived… I proceeded on about 3 miles this morning finding no fresh Indian Sign returned down the river four miles and Camped, turned out to hunt for Some meat, which if we are Suckessfull will be a Seasonable Supply for the partey assending. emence quantities of Sarvice buries, yellow, red, Purple & black Currents ripe and Superior to any I ever tasted particularly particularly the yellow & purple kind. Choke Cheries are Plenty; Some Goose buries—The wild rose Continue the Willow more abundant no Cotton wood of the Common kind Small birds are plenty, Some Deer, Elk, Goats, and Ibex; no buffalow in the Mountains. Those mountains are high and a great perportion of them rocky Vallies fertile I observe on the highest pinicals of Some of the mountains to the West Snow lying in Spots Some Still further North are covered with Snow …

Mann Gulch, Gates of the Mountains