The sound of the river is part of my world, day and night. There are few sounds more conducive to a good night’s sleep and last night was no exception.

My getaway was more relaxed today. I have a homemade coffee/mocha mix that I drink cold. I sipped it as a lounged a bit longer in my warm bag. Then there was, as usual, the donning of wet pants, wet socks, wet shoes. Until I got my temporary cheap shoes, I was forgoing the socks.

It was again a winding river with looming dark cliffs. And again it was a big day for mink, and today, muskrats. Today’s headwind wasn’t as bad. Fishermen were out, and this being a Saturday, this scenic section of river attracted many floaters, which I first started seeing in late morning.

At Craig I landed my kayak in a carnival atmosphere of people getting ready to launch. One guy asked me where I started. When I told him he was amazed and delighted.

I walked to a little restaurant. They weren’t afraid to charge big. For example, they had an “ATM” that charged $4 for $40 max. An instant 10% sounds pretty high!  Despite paying double, I had a good burger.

The geese were so accustomed to floaters they were barely getting out of the way.

I made it to Holter Dam around 4. I completely emptied, cleaned and reloaded my kayak. After getting some water I attached the cart and made the portage of less than a mile. Pretty steep at the end.

It seemed like a long time since I’d been on a lake. Across the lake were real mountains, thousands of feet high. The wind suddenly turned to a tailwind with enough waves so I almost wished I’d put on the spray skirt.

I paddled a couple more miles and decided to camp about 6 pm. There was a nice spot under a big Ponderosa, too small for a tent though, drat. Then it struck me: I don’t need no stinking tent, OR sleeping pad! I’d do what I’d been looking forward to: cowboy camping on pine straw. 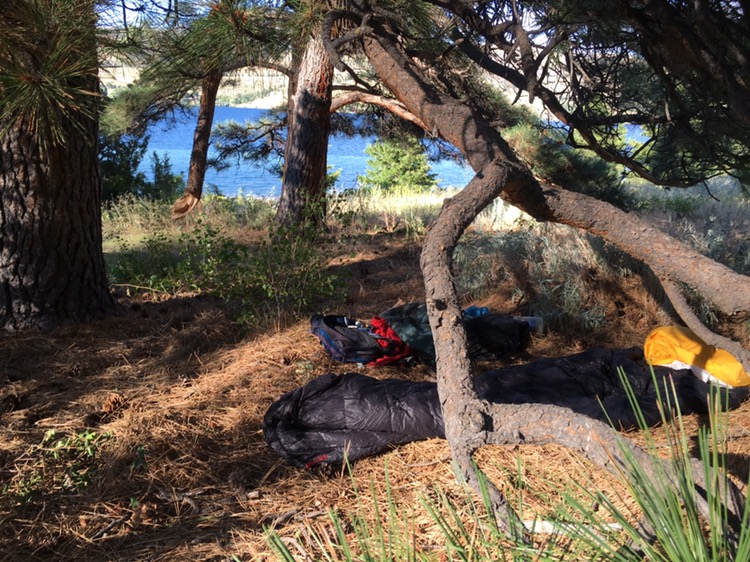 It was another day with some hard miles, but I still made 15 miles, including the portage. Colter

Lewis: Thursday July 18th 1805. Set out early this morning. previous to our departure saw a large herd of the Bighorned anamals on the immencely high and nearly perpendicular clift opposite to us; on the fase of this clift they walked about and hounded from rock to rock with apparent unconcern where it appared to me that no quadruped could have stood, and from which had they made one false step they must have been precipitated at least a 500 feet… as we were anxious now to meet with the Sosonees or snake Indians as soon as possible in order to obtain information relative to the geography of the country and also if necessary, some horses we thought it better for one of us either Capt. C. or myself to take a small party & proceed on up the river, some distance before the canoes, in order to discover them, should they be on the river before the daily discharge of our guns, which was necessary in procuring subsistence for the party, should allarm and cause them to retreat to the mountains and conceal themselves, supposing us to be their enemies who visit them usually by the way of this river.

Into the Rocky Mountains