Into the Rocky Mountains

There were plenty of mosquitoes outside my tent, but they were lethargic from the morning chill.  I heard some familiar bird calls, but couldn’t place them until I remembered it was Clark’s Nutcrackers.

Fast current/rapids alternating with slower pools had me out of the kayak most of the day.

Today I entered the Rocky Mountains and, like Lewis and Clark, was impressed by the dark, rugged cliffs looming over the river, truly some of the most dramatic scenery of the trip. A bighorn ram stood silhouetted on a ridgeline. 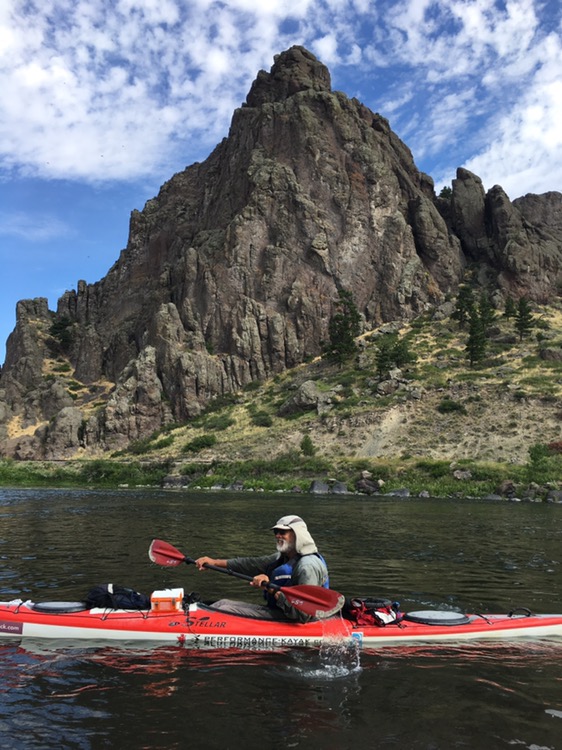 Paddling into the mountains

Very fast current rushed past a boulder on the bank, forcing me to paddle around it. When my kayak hit the much faster current, water piled up, threatening to flood my cockpit. I quickly leaned away to prevent it: too far. For the first time on the whole trip I capsized. It was a big surprise. I quickly got out and got my feet on the river bottom and righted the boat, taking a quick look to make sure nothing was floating away.

I pulled the kayak over to a tiny grassy island. Somehow there was only a little water in the cockpit which I sponged out. The hatches hadn’t leaked. Everything was secure. The water hadn’t even been that cold. Other than whacking my left shinbone on the edge of the cockpit, it was about as inconsequential as it could have been.

The river alternated between having a wilderness feel and seeming busy. It passed under I-15 several times. There were a number of fishing boats and even more floaters, some in huge rafts, some in tiny boats of various kinds, one in an inflatable pink flamingo.

At one corner a plastic bottle came flying out of the willows into the river, just thirty feet ahead. I grabbed it and paddled around the corner. An old guy was messing with a small tractor.

“Did you just throw this in the river?”

“It must have rolled into the water.” That was, for sure, a bald-faced lie. I flung the bottle at his feet and kept going as he berated me, obviously angry about being caught red-handed. The river is so trash-free his behavior was really surprising.

I was watching for a yellow kayak today and spotted it easily. It was Bob and Barb Bellingham of Australia. They were paddling to Kipp Landing. Bob had paddled the whole river in 2012. We landed and had a long conversation about paddling and the Pacific  Crest Trail, which we all had hiked in 2010. It was an enjoyable rendezvous. 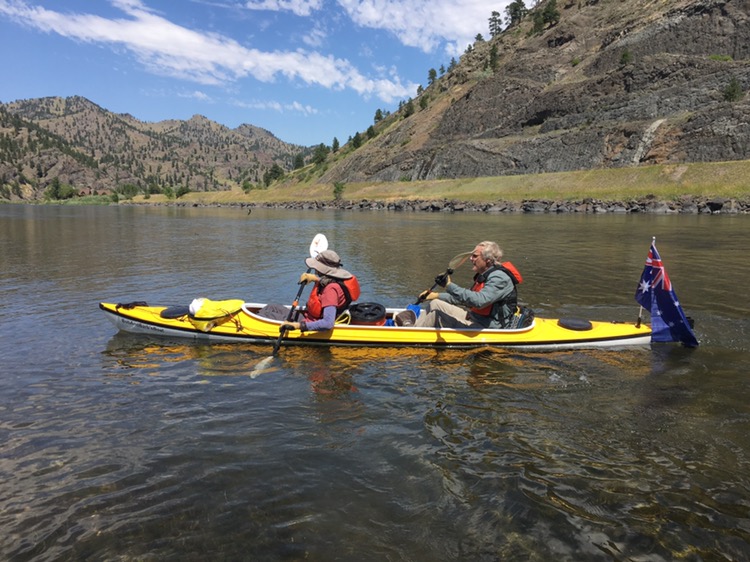 I saw two mink today. The first watched half hidden in the willows, so close I could nearly have touched him with a paddle.

The wind blew hard most of the afternoon. A headwind. I’d often have  to rest before paddling through especially fast, deep water where I couldn’t pull.

I camped on a willow island near dark cliffs and an abandoned railroad tunnel. These were some of the toughest miles of the trip, but I managed to eke out about 15 miles. Colter Clark: July 17th Wednesday 1805 Set out early this morning and Crossed the rapid at the Island Cald pine rapid with Some dificuelty, at this rapid I came up with Capt Lewis & party took a Medn. altitude & we took Some Luner Observations &c. and proceeded on, the emence high Precipies oblige all the party to pass & repass the river from one point to another the river confined in maney places in a verry narrow Chanel from 70 to 120 yards wide bottoms narrow without timber and maney places the mountain approach on both Sides, we observe great deel of Scattering pine on the mountains, Some aspin, Spruce & fur trees took a meridian altd. which gave for Lattitude 46 ° 42′ 14″ 7/ 10 N we proceeded on verry well about 8 miles & Camped on the Stard Side The river crooked bottoms narrow, Clifts high and Steep, I assended a Spur of the Mountain which I found to be highe & dificuelt of axcess, Containig Pitch Pine & Covered with grass… Saw Several Ibex or mountain rams to day

Foot of the Mountains