Foot of the Mountains

Jim was already getting coffee ready before 4:30 in the morning. He made us each a fine cup and then we headed off down the road to my kayak where Jim dropped me off.

I was paddling early. It was nearly calm when the sun rose behind the orange clouds.

I stopped to take a photo of some enormous thistle blossoms and after I paddled around the corner saw Jim and “Raz” up ahead. Raz came out to inspect my kayak. I thanked Jim for the food and water he’d given me and even more so for that surprise visit. Griff was an outstanding smokejumper and one of the most generous and dependable friends I have. 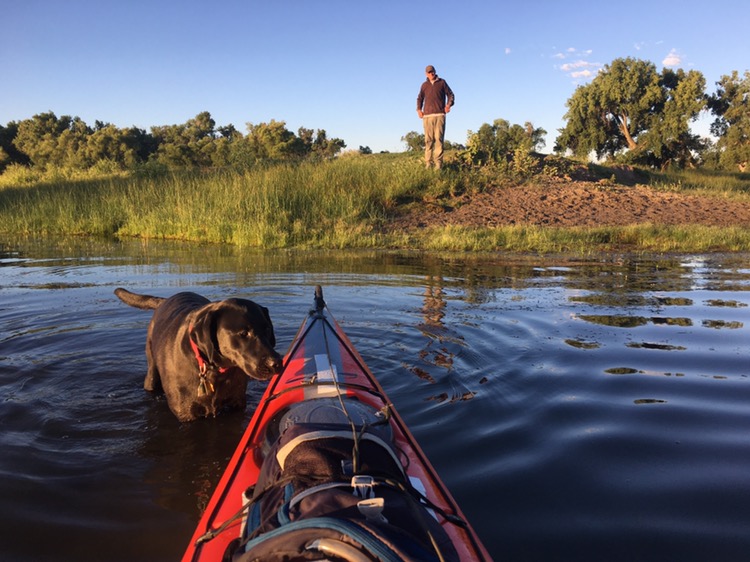 The current and wind were both light and the miles rolled by. About two miles from Cascade though, things changed: the current picked up and usually stretched across the river. The wind wasn’t doing me any favors either. I finally had to get out and pull in places. It seemed the water became clearer, and I began to see trout.

At the Cascade bridge I tied the boat off and hiked up the road. I threw away my trash at a barrel in the park, then filled a couple of water bottles from a hydrant.

It was a few blocks to Tom’s Grocery. I walked the aisles buying about three more day’s worth of food to supplement what I had.

After launching there were alternating stretches of fast and moderate current. Perhaps I’d get 20 miles in after all. When I did have to pull it was often in shallow water with a firm bottom: very easy going.

A trout fishing boat drifted by, a guide and two clients. In this wind the guide was wise to be wearing wrap-around glasses and a hat that covered the back of his head to protect himself from errant flies. For a few miles there were maybe a dozen more boats. I saw at least two big trout were landed, both released, including an especially big brown trout. The anglers kept him out of the water far too long taking photos, though: leave the fish in the water, get the camera ready, take a quick shot and let it go.

The anglers were having fun though, and no group is a greater friend to these trout rivers.

Soon the boats disappeared and I had the river to myself again. I looked up and realized I really was entering the mountains. A ridge rose hundreds of feet above the river, with conifers and scree slopes. Ahead were more and more mountains.

I found a fine camp in the grass along  a side channel. It had been a hot day and the sun would soon disappear behind the mountains, and I’d be asleep early. Colter

Clark: July 16th Tuesday 1805 a fair morning after a verry cold night, heavy dew, dispatched one man back for an ax left a fiew miles below, and Set out early Killed a Buffalow on which we Brackfast Capt Lewis & 3 men went on to the mountain to take a meridian altitude, passed about 40 Small Camps, which appeared to be abandoned about 10 or 12 days, Suppose they were Snake Indians, a fiew miles above I Saw the poles Standing in thir position of a verry large lodge of 60 feet Diamater, & the appearance of a number of Leather Lodges about, this Sign was old & appeared to have been last fall great number of buffalow the river is not So wide as below from 100 to 150 yards wide & Deep Crouded with Islands & Crooked Some Scattering timber on its edge Such as Cotton wood Cotton willow, willow and box elder, the Srubs are arrow wod, red wood, Choke Cherry, red berries, Goose beries, Sarvis burey, red & yellow Currents a Spcie of Shomake &c. I camped on the head of a Small Island near the Stard. Shore at the Rockey Mountains this Range of mountains appears to run N W & S E and is about 800 feet higher than the Water…

Keep an eye out for Bob and Barbara in the yellow kayak. They camped near Craig, Mt last night. You should see them today! How about a group photo? 😉

I’ll watch for them Norm.