Calm winds and light current made the early hours easy paddling. Many deer came down to the river throughout the day. I got a kick out of the little fawns. Sometimes they’d see me and usually just watch me curiously until mom gave the order to run, then they’d bolt with amusing speed.

As I neared Ulm I spotted a gas station. That unusually means food. I hiked up there and they had pizzas. Obviously I ordered a supreme large.

Back at the river I was just about ready to launch when someone at the fishing access across the river put his arms in the air and yelled “Hey!” With no idea who it was I yelled “I’ll come over there.”

About half way there I saw it was my old smokejumper buddy Jim Griffin! What a great surprise. He was surprised to see me here as well, not thinking he’d run into me until later in the day.

It was a fun reunion. When we got caught up we agreed to meet a few miles up river at the next fishing access.

Griff had found a good spot with perfect shade and we took a nice break with camp chairs. The lap of luxury! 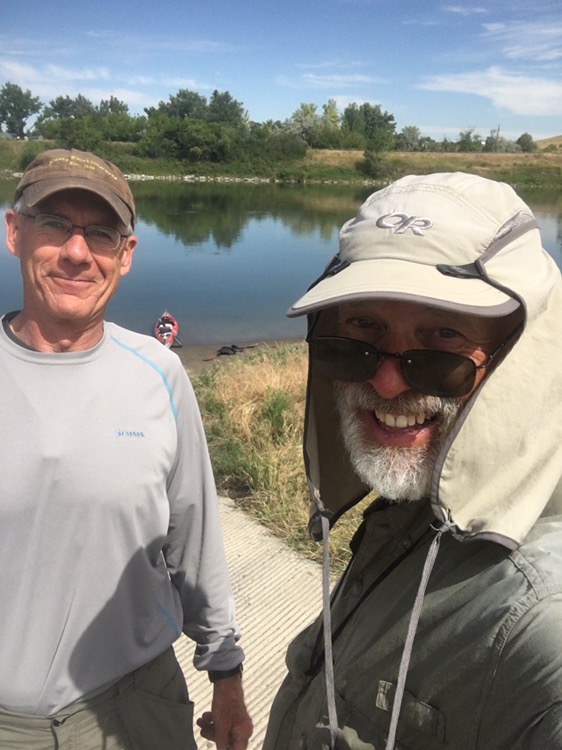 Jim Griffin and me

We made a plan to meet again maybe 9 river miles ahead. After I launched the wind came up. Good thing the current was light. At one spot I watched the strong wind blow tumbleweeds off a bluff into the river, it looked like sailors jumping off a sinking ship in a hurricane.

I was getting tired fighting the wind so it was nice when we made the rendezvous. I tied off the boat and grabbed my camping stuff and we drove into Cascade for big burgers. 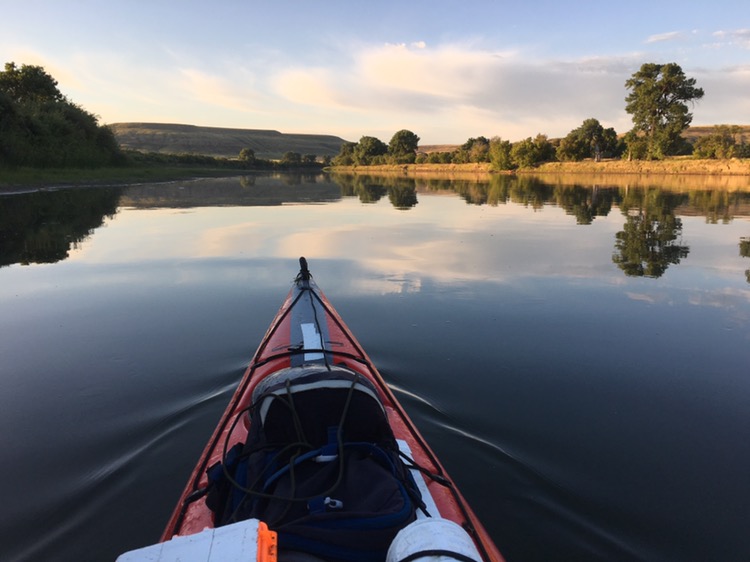 The next stop was a nice campground on the river. We had a great talk until I headed for my tent. Griff was then called on by someone whose friends floating the river hadn’t showed up yet, just before dark. Griff drove them up the river and got everything straightened out. Colter

Lewis: Monday July 15th 1805. We arrose very early this morning, assigned the canoes their loads and had it put on board. we now found our vessels eight in number all heavily laden, notwithstanding our several deposits; tho it is true we have now a considerable stock of dryed meat and grease. we find it extreemly difficult to keep the baggage of many of our men within reasonable bounds; they will be adding bulky articles of but little use or value to them.

I really like that last sentence in the Lewis Journal – “bulky articles of little use…” Little has changed for long distance paddlers.

Yeah I carried a metal dumbbell weight clamp/lock all the way to the ocean as well as a rubber frog.