One last fine complimentary breakfast, a packing of the boat, and then I carted the kayak to the river.

The river was mellow and the winds were light, making for some of the easiest river paddling in a long time. It was just a pretty, sunny day.

The shoreline alternated between wild country and mostly fancy homes, some of which would surely qualify as mansions. There were many whitetail deer, geese and beaver, even a flock of sheep on a steep hillside.

Two labs, one yellow and one black, jumped joyfully into the river. Later I saw three kayaks with another yellow lab having the time of his life. He swam around the kayaks, over to shore for a romp, over to me and then back to his kayaks. I chatted with the kayakers who were interested in my trip, insisting I take a cold beer.

A very dark storm was sweeping in from the south just as I hit 20 miles. My tent was barely up when the rain, and then the wind, hit. It is always fun to beat a storm like that. Colter

(Don’t forget to check out the many “catch up” days I’ve posted recently.) 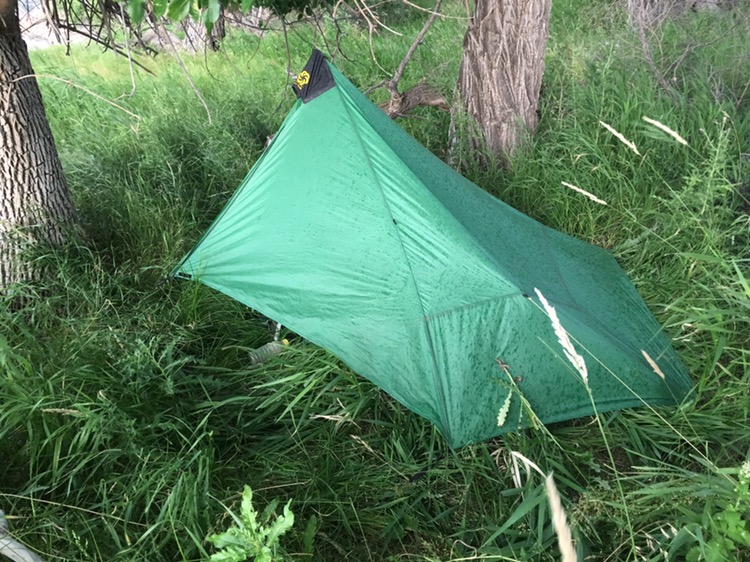 July 10th Wednesday 1805 a fair windey day wind hard the most of the day from the S. W.rained modderately all last night (by Showers) we dispatched Serjt. Ordway with 4 Canoes loaded & 8 men by water to assend as high as I Should have found timber for Canoes & formed a Camp;-. I Set out with Sergt. Pryor four Choppers two Involids & one man to hunt, Crossed to the Std. Side and proceeded on up the river 8 miles by land (distance by water 231/ 4 ms.) and found two Trees which I thought would make Canoes, had them fallen, one of them proved to be hollow & Split at one End & verry much win Shaken at the other, the other much win Shaken, we Serched the bottoms for better trees and made a trial of Several which proved to be more indifferent. I deturmined to make Canoes out of the two first trees we had fallen, to Contract thir length so as to clear the hollow & winshakes, & ad to the width as much as the tree would allow. The Musquitors emencely noumerous & troublesom, Killed two deer & a goat. The Canoes did not arrive as I expected, owing to the hard wind which blew a head in maney places. we ar much at a loss for wood to make ax hilthes, 13 hath been made & broken in this piece of a day by the four Choppers, no other wood but Cotton Box elder Choke Cherry and red arrow wood. we Substitute the Cherry in place of Hickory for ax hilthes ram rods, &c. &c.

Buck…..you are about to pass by a place on the river called: Pelican Point. My son caught a 3 lb. rainbow right there when he was about 4 years old. Talk about being excited. This is some pretty nice country right through here as you are finding out.

I’ll watch for it!