Great Falls was a good stop along the trail. I walked several miles Sunday, food shopping, buying new shoes and replacing a few other small items.

Another task was to epoxy the crack and dings in my kayak. Lots of good town food was a treat as well. I like this town. 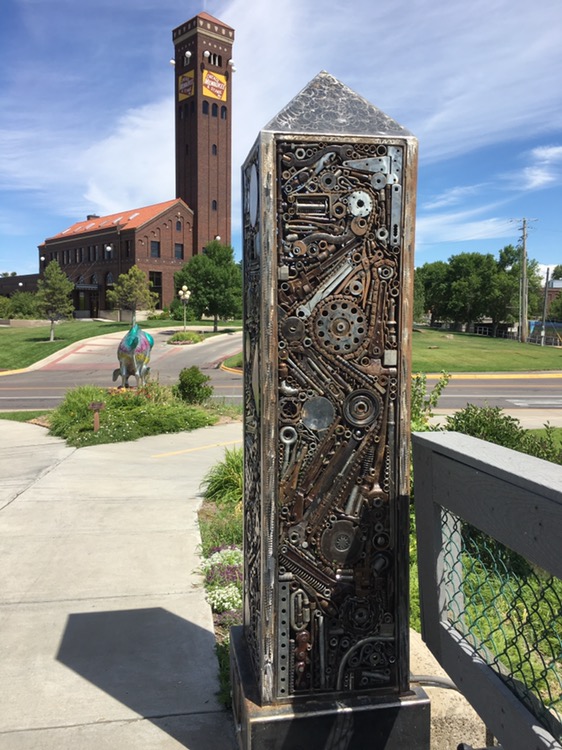 Monday morning I was packing to go and suddenly realized I should have epoxied the inside of the crack as well, because it went all the way through in places. I decided it would be smart to make that repair and give it a full day to dry. Some more time to relax now that my town chores were completed would be a good bonus.

In the afternoon Bruce Auchly stopped by and showed me some of the sites around town, such as the main Falls, the place where Lewis had the standoff with the grizzly, and where the L&C portage ended, with a reconstruction of the iron boat. 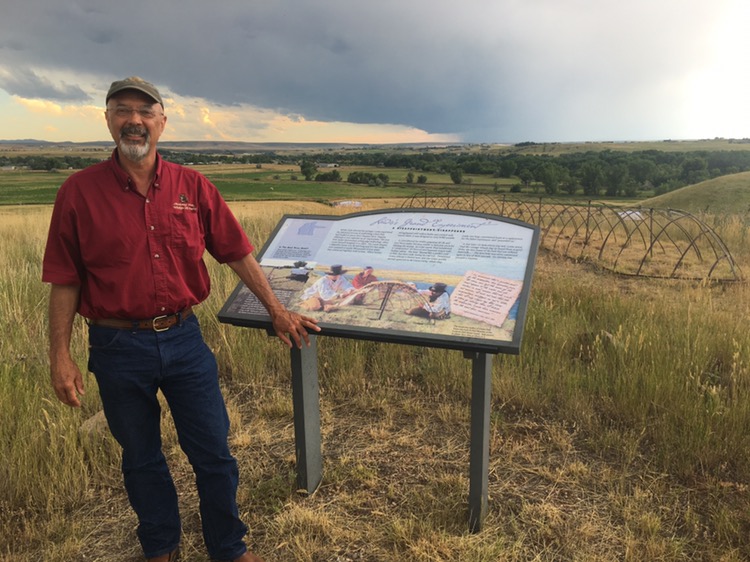 Bruce, the portage site, and the iron boat

Later Bruce and Sally hosted me for conversation and a fine meal including elk steaks. Thanks you two, it was great!

I made another post yesterday catching up on days where I had no coverage:

Lewis: Friday June 14th 1805… having entirely forgotton to reload my rifle, a large white, or reather brown bear, had perceived and crept on me within 20 steps before I discovered him; in the first moment I drew up my gun to shoot, but at the same instant recolected that she was not loaded and that he was too near for me to hope to perform this opperation before he reached me, as he was then briskly advancing on me; it was an open level plain, not a bush within miles nor a tree within less than three hundred yards of me; the river bank was sloping and not more than three feet above the level of the water; in short there was no place by means of which I could conceal myself from this monster untill I could charge my rifle; in this situation I thought of retreating in a brisk walk as fast as he was advancing untill I could reach a tree about 300 yards below me, but I had no sooner terned myself about but he pitched at me, open mouthed and full speed, I ran about 80 yards and found he gained on me fast, I then run into the water the idea struk me to get into the water to such debth that I could stand and he would be obliged to swim, and that I could in that situation defend myself with my espontoon; accordingly I ran haistily into the water about waist deep, and faced about and presented the point of my espontoon, at this instant he arrived at the edge of the water within about 20 feet of me; the moment I put myself in this attitude of defence he sudonly wheeled about as if frightened, declined the combat on such unequal grounds, and retreated with quite as great precipitation as he had just before pursued me.

Hey Buck……Rlundo here. I just hung up my phone from talking with Al Biller. We were discussing you to be precise and what your next moves are gonna be. I told Allan that he will probably pull out at Mann Gulch and check out the memorial there and then be getting into Three Forks not too many more days after that. So…..as you can see there are some of your old jumper bros who are keeping close tabs on your progress. Keep up the great comments.

Lundo!
Glad you talked to Al. Yup, I’m going to check out Mann Gulch. I think there’s a lot of current ahead but it’s only about 150 miles to Three Forks from here so it won’t be too many days.
Buck