August 4: There were nice wide shoulders with minimal traffic walking the last 6-7 miles into Dillon. I found another little fishing fly box with just a few flies in it.
I stopped at McDonalds for breakfast and to use their WIFI. I couldn’t get the WIFI to work, because it didn’t as it turned out. I surely enjoyed hot coffee and breakfast nonetheless.

In a little park I sorted out my trash and inventoried my food, then headed over to the grocery store and bought enough additional food for the estimated five days to Salmon. It is nearly impossible to leave a grocery store on a trip like this without some ice cream, do I bought a pint of strawberry. Good call.

I ate my ice cream on a bench out front and was joined by a 30ish fellow who called me “man” or “dude” at least twice a sentence if possible. He was friendly however.

I enjoyed my walk through Dillon. It’s become something of a groovy place which isn’t all bad. I had a guy watering his lawn top off my water bottles which he was happy to do.

Just before heading out of town I passed a Dairy Queen. Well I ALMOST passed it. It would be crazy to pass up this chance for my last hot food in days. Oh-oh, it doesn’t open until 11! And this is… 11. They unlocked the door and swung it open for me. Nice.

It was plenty hot walking out of town. Not Africa hot, maybe Tucson hot. Luckily I was walking a quiet frontage road. In a few miles I came to a bridge over the Beaverhead and walked down under it and enjoyed the coolness of the shade and river. After another very hot stretch I took Break Two in the shade of willows next to a babbling brook. For such a shade-scarce stretch I was lucky.

The scenery was great again, with mountain ranges appearing and receding as the miles rolled by. A typical scene would be irrigated alfalfa fields in the foreground, then grassy foothills with evergreens higher on the mountains, the tallest peaks topped with scree and rock and occasional small patches of snow.
Bluffs of brown rock now rose next to the river. 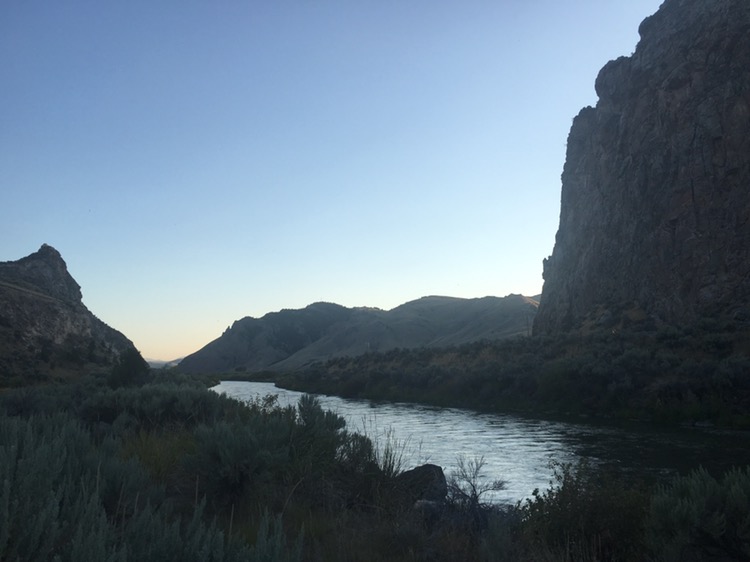 Cliffs over the Beaverhead

The frontage road disappeared. My choices were I-15, cross country, or the railroad corridor. I chose the railroad, walking the gravel bed for a couple miles, off the tracks. The Beaverhead ran to my right, with its unusual narrow, deep, fast, greenish water. When a rugged road appeared to my left I walked it until near dark.

A doe and fawn mule deer ran up the slope and watched from above. The old road skirted some cottonwoods. It would be dark soon. I turned up a side road and camped on flat, grassy ground next to a patch of trees and a brook.

August 5: I got an early start, hiking up the gravel road along the Beaverhead. It was amazing how there was far more water here than way downstream on the Jefferson, which also carries the water of the Bighole River. Most of those two rivers ends up on fields in a relatively short distance.

There were a couple of fishing boats and one wading fisherman. It was some of the best looking fishing water I’ve seen on this hike.

Just short of the Clark Canyon dam was a campground and fly shop. I swung in there and bought a Klondike Bar and an ice cream sandwich. It hit the spot. I filled up my water bottle before leaving.

I crossed the dam and walked until I got to the signs commemorating Camp Fortunate. With the island in the lake it reminded me of Crater Lake. Here the main L&C party met the Shoshone, and Sacajawea was reunited with her own brother, the chief! One of the most famous amazing coincidences of history. With Shoshone horses there was now a good chance of making the Pacific that year. 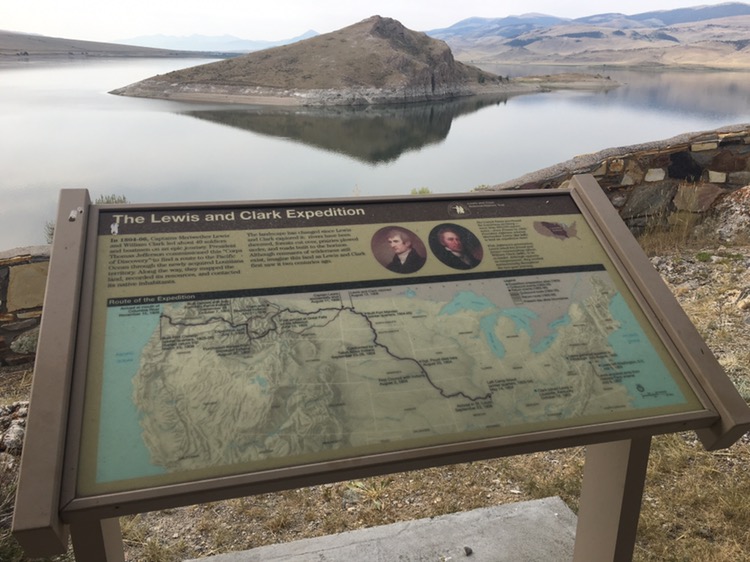 It was hot when the sun came out, and breaks were determined as much by heat as fatigue. Good shade was hard to come by. The best was a large, very long culvert under the road. It was almost chilly inside.

In the town of Grant I checked to see if the restaurant was open. I almost left when I heard some singing and piano playing.

“Not really, but I can get you something to eat if you like.”

I didn’t want him to go to all the trouble. Instead, for the next half hour I was treated to a couple more songs, and many amazing stories, including ghosts in the hotel, and the time he’d frozen his toe off and it grew back!

Down the road a badger ran across the road. Antelope fed here and there in the big sage. A donkey and three horses fed in a field. The donkey immediately decided we’d be best friends and came trotting over. He enjoyed a good ear scratching, gazing at me fondly. He followed along the fence as I left. 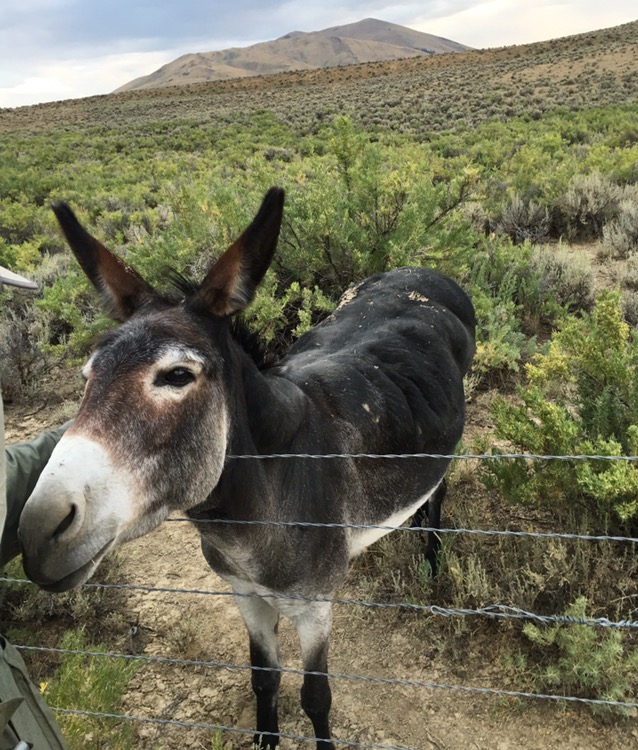 I hiked until about 9 PM, camping nearly out of sight of sight of the road, on the other side of the fence from two bulls who were only marginally interested in me.

August 6: I kept waking up last night to get comfortable. My hip joints were aching. Not bad, just enough to be annoying.

The days are getting shorter. I was hiking well before sunrise, before 6. There had been almost no cars last night and there were very few this morning.

Willows grew along streams. Fields were dotted with big, round bales. I began to see more and more antelope. It was exciting to see the turnoff for Lemhi Pass. The Continental Divide! Whitetail loped across fields into the willows. Some groups of Angus chose to run, some chose to chase me until they got to the fence, and then follow along. 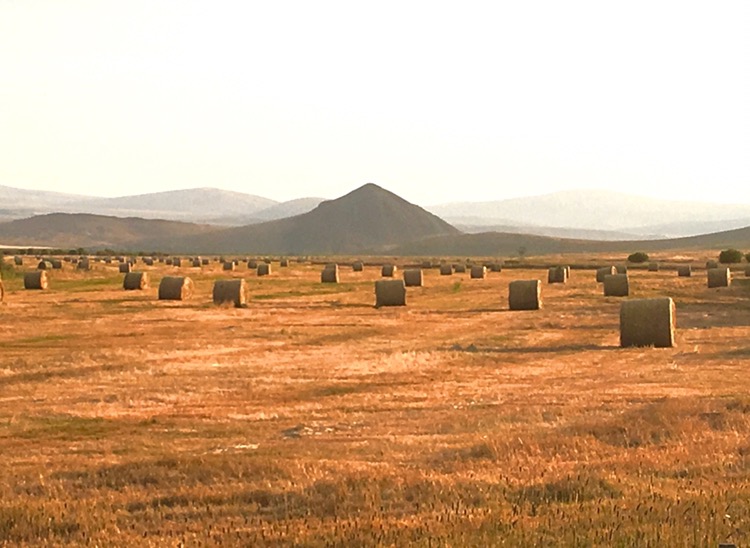 Bales and and Mountain

It was cloudy at first but when it started clearing it seemed destined to be a very long, hot climb up to the divide.

I saw some Clark’s Nutcrackers and a pine squirrel, many antelope, a mule deer. The day seemed to be cooling with some clouds moving back in. The scenery was wonderful, grassy valleys and sage running up to green fir and lodge pole. I passed a sign noting the approximate spot where one of the L&C men stood astride what they called the Missouri.

A brief rainstorm hit, I ducked under a perfect fir tree and was well sheltered. I looked at a roadside map and took a shortcut over to the Sacajawea/”Most Distant Fountain” picnic area. They think this is the spring Lewis described.

I got drinking and cooking water from the spring and cooked up some ramen. A pickup drove down the road up the hill with an obvious flat. Two older guys were having a tough time changing the tire. It was a rare event for me to be the mechanical whiz in a group.

They were very thankful, them and their wives offering a ride, food, water. But I had what I needed. Thanks!

I walked up the gravel road to Lemhi Pass and the Continental Divide, and I looked down into Idaho and the Columbia watershed. This was a huge landmark for Lewis and Clark, and for me as well, one I’d been imagining for many months.

Here two timelines of my life met, the me from 2010 when I reached this point on the Continental Divide Trail having hiked from Mexico; and the me currently on the Lewis and Clark Trail. 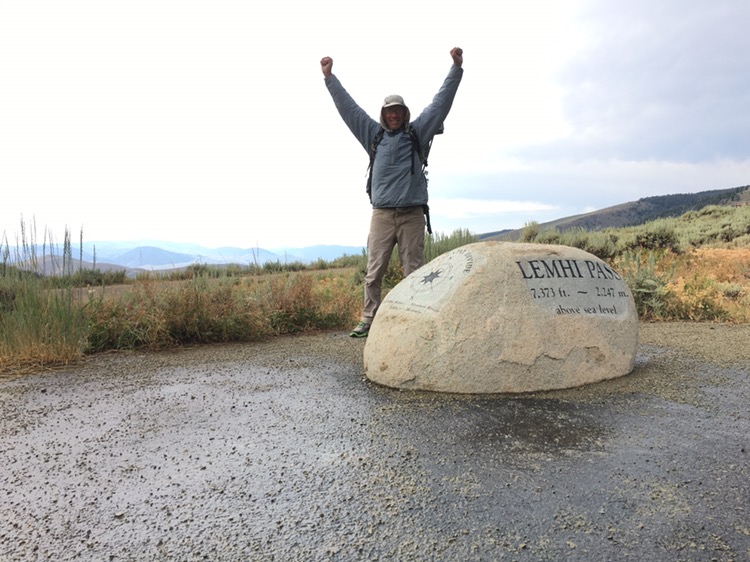 The sky was growing dark and thunder was rumbling. A cold wind blew with rain on its heals. I noticed I had coverage and retreated to the large overhang of a scenic outhouse to write this. I hope this rain is a heavy one and covers a big area for the good of the wildfires and for the rivers. Colter

Lewis: “Monday August 12th 1805 …at the distance of 4 miles further the road took us to the most distant fountain of the waters of the mighty Missouri in surch of which we have spent so many toilsome days and wristless nights. thus far I had accomplished one of those great objects on which my mind has been unalterably fixed for many years, judge then of the pleasure I felt in allying my thirst with this pure and ice cold water which issues from the base of a low mountain or hill of a gentle ascent for 1/ 2 a mile. the mountains are high on either hand leave this gap at the head of this rivulet through which the road passes. here I halted a few minutes and rested myself. two miles below McNeal had exultingly stood with a foot on each side of this little rivulet and thanked his god that he had lived to bestride the mighty & heretofore deemed endless Missouri.”

Clark: “August 17th Satturday 1805 a fair Cold morning wind S. W. the Thermometer at 42 a. 0 at Sunrise, We Set out at 7 oClock and proceeded on to the forks I had not proceeded on one mile before I saw at a distance Several Indians on horsback Comeing towards me, The Intertrepeter & Squar who were before me at Some distance danced for the joyful Sight, and She made signs to me that they were her nation…”

Lewis: “Saturday August 17th 1805… Capt. Clark arrived with the Interpreter Charbono, and the Indian woman, who proved to be a sister of the Chif Cameahwait. the meeting of those people was really affecting, particularly between Sah cah-gar-we-ah and an Indian woman, who had been taken prisoner at the same time with her, and who had afterwards escaped from the Minnetares and rejoined her nation.”

Outstanding progress, Buck, you are really tearing up the miles. Hope you get a reprieve from the hot weather while you are in the mountains.

Thanks Allen. Thunderstorms have passed through the last two days and cooled things off.