It was a good camp last night in Twin Bridges, along the Beaverhead River. No dew and no surprise attack of the lawn sprinklers in the middle of the night. I packed early so I could maximize walking while it was still cool. 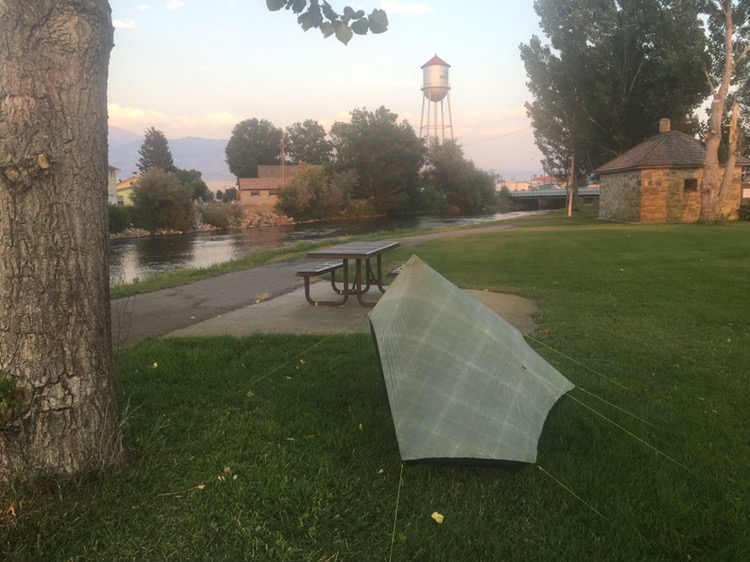 The Beaverhead is a green valley owing largely to irrigation. Hay is big business in this country. A view from any high point is likely to show hundreds of sprinkler heads showering the fields.

Many mountain ranges were visible, the Tobacco Roots, Highlands, the Pioneer Range and the Rubys, and most dramatic of all, the Anaconda Range, that I remember so well from the Continental Divide Trail. I had to look up some of the ranges on a map to get them straightened out in my head.

I was taking a photo of Beaverhead Rock, that famous landmark of L&C, when someone pulled up: Jim Griffin! 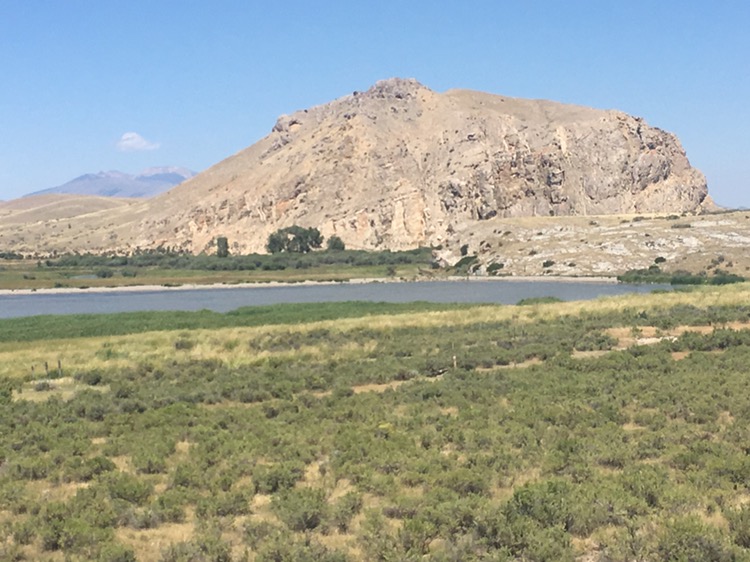 Lewis: the Indian woman recognized the point of a high plain to our right which she informed us was not very distant from the summer retreat retreat of her nation on a river beyond the mountains which runs to the west. this hill she says her nation calls the beaver’s head from a conceived remblance of it’s figure to the head of that animal…

Jim had brought me a fine picnic with a wide selection of ten times as much as I could eat. I had BBQ chicken, an apple, a sandwich, a quart of sports drink, chocolate, peanuts and probably more I’ve forgotten about. Jim’s lab enjoyed swimming in the river. I also got some food to go and topped off my water bottles which was a big bonus. Thanks Griff!

There was more traffic and narrower road  shoulders than I cared for, but it was easy to get out of the way. I must have seen about 10 long distance touring bicyclists, including a Dutch couple I talked to briefly.

By mid afternoon I was getting two small blisters between my toes. Heat was a big factor. Sweaty, not fully toughened feet are susceptible. The afternoon felt hotter than had been predicted. I took a couple of long breaks when it was hottest.

Evening was wonderful walking conditions, much cooler and the road now had wide shoulders. I walked until just before sunset.

It was easy finding a place to camp. The road had a wide rightaway and I rolled out my bag and pad in a hidden spot. When the skeets showed up later I quickly set up my tent and slept well. Colter

Lewis: Thursday August 8th 1805… the Indian woman… assures us that we shall either find her people on this river or on the river immediately west of it’s source; which from it’s present size cannot be very distant. as it is now all important with us to meet with those people as soon as possible, I determined to proceed tomorrow with a small party to the source of the principal stream of this river and pass the mountains to the Columbia; and down that river untill I found the Indians; in short it is my resolusion to find them or some others, who have horses if it should cause me a trip of one month. for without horses we shall be obliged to leave a great part of our stores, of which, it appears to me that we have a stock already sufficiently small for the length of the voyage before us.

Buck……I see you are not far from where L&C left the Beaverhead and headed up Horse Prairie creek, just at the west end of Clark Canyon reservoir. You ought to lose a lot of the traffic you’ve mentioned then I’m sure. Your are gettin’ close to where they met the Shoshones. Everyday is exciting for me here watching your progression. I hope that fire near Hamilton is taken care of before you get over there so it doesn’t mess with your plans.