I walked down the quiet back road on the east side of the Jefferson River. Eventually the rising sun hit the highest peaks of the Highland Mountains, ten miles to the west.

Three stones on the road shoulder marked the nearby tipi rings the rancher had told me about. Surely I would have missed them otherwise. Long ago Shoshone, Crow, Blackfeet, Gros Ventres: perhaps all of them at different times, or maybe people predating them, had camped here, a spot with handy water and good hunting.

Light drift smoke from a fire in the Bitterroot Mountains hung over the peaks. Morning sun glittered on hundreds of sprinklers watering alfalfa fields. Scores of deer fed, muley and whitetail. A saw a band of about eight whitetails, all bucks I think, some old timers. The air smelled sweet from freshly cut hay.

I crossed the Jeff at Waterloo Bridge. It was shocking how low the water was. An irrigation dam was diverting a significant amount of the remaining water, water that created those lush fields. Can the trout survive the falling, warming water? It’s a good illustration of the water rights and river health issues in the West.

Across the bridge two local ladies stopped to ask if I needed a ride. Exceptionally cheerful, they were thrilled when I told them about my trip. What a happy world for the naturally good-natured. They insisted on getting a photo of me.

The paved road heading to Twin Bridges had almost no shoulder at first, but when “41” joined it it had nice wide shoulders. The sun was now baking down on the black top. 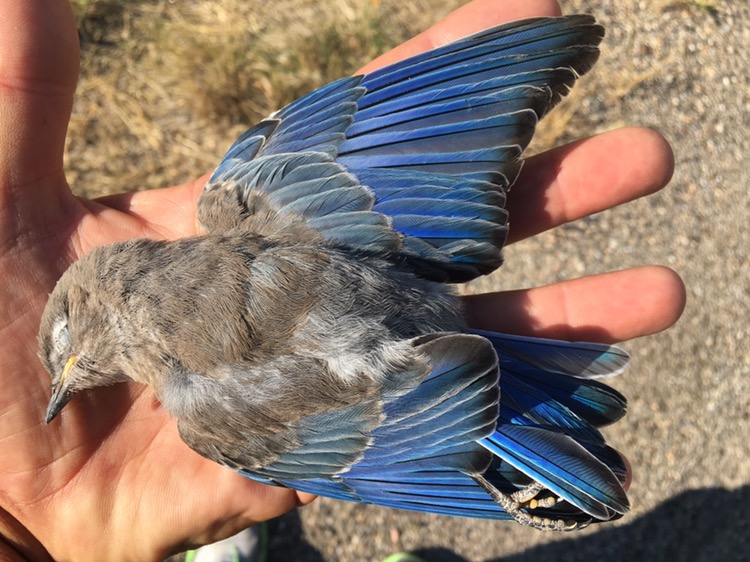 I stopped at the little store at Silver Star. Not much for food but it did have ice cream. I ate a Drumstick and a frozen malted milk, and then another. An older local guy asked where I was headed and was very tickled when I told him.
“You have a good trip young feller!” He said as he got into his pickup.

The store owner let me fill up my water bottles at a spigot. It was really hot now, I’d need it. 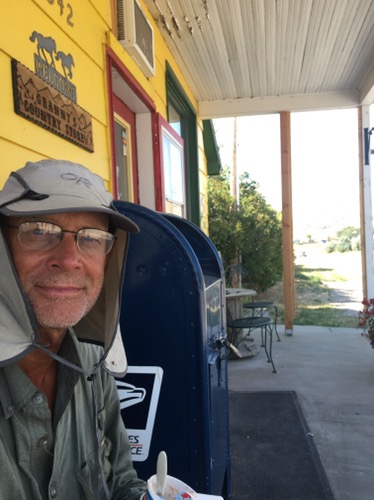 When I got to the Hells Canyon bridge I needed some shade. Just as I reached the waters edge a big mule deer buck walked out of the willows, headed for the other side of the bridge support. I got my camera ready but he never walked out. Likely shading up himself. When I tried to look he trotted away. He was mighty close for a while!

At about 4 pm the baking sun, mid 90s I think, became partially hidden by the sun. About 6 I made it to Twin Bridges.

The first restaraunt had an all-you-can-eat taco salad bar. Perfect!  I had a fine, leisurely meal in air conditioned comfort, talking to some friendly fishermen.

I crossed the bridge over the Beaverhead River. Not far below it joins the Bighole to form the Jefferson, at the point Lewis left his note for Clark.

I stayed at the very nice Bike Camp just across the bridge. A hot shower and a good grassy campsite made for a nice end to the day. Colter

Check out my prior post from late yesterday https://bucktrack.com/lewis-and-clark-trail/bear-caves-and-pictographs/

Lewis: Sunday August 4th 1805… arrived at… a river [Beaverhead] 50 yds. wide which Comes from the S. W. and falling into the South valley runs parallel with the middle fork about 12 miles before it forms a junction. I now found that our encampment of the last evening was about 11/ 2 miles above the entrance of this large river on Stard. this is a bold rappid and Clear Stream, [Big Hole] it’s bed so much broken and obstructed by gravley bars and it’s waters so much subdivided by Islands that it appears to me utterly impossible to navigate it with safety. the middle fork is gentle and possesses about 2/ 3rds as much water as this stream. it’s course so far as I can observe it is about S. W., and from the opening of the valley I beleive it still bears more to the West above it may be safely navigated. it’s water is much warmer then the rapid fork and it’s water more turbid; from which I conjecture that it has it’s sources at a greater distance in the mountains and passes through an opener country than the other. under this impression I wrote a note to Capt Clark, recommending his taking the middle fork povided he should arrive at this place before my return, which I expect will be the day after tomorrow. this note I left on a pole at the forks of the river…

Lewis: Monday August 5th 1805… This morning Capt. Clark set out at sunrise… the men had become very languid from working in the water and many of their feet swolen and so painfull that they could scarcely walk. at 4 P.M. they arrived at the confluence of the two rivers where I had left the note. this note had unfortunately been placed on a green pole which the beaver had cut and carried off together with the note; the possibility of such an occurrence never one occurred to me when I placed it on the green pole. this accedent deprived Capt. Clark of any information with ripect to the country and supposing that the rapid fork was most in the direction which it was proper we should pursue, or West, he took that stream and asscended it with much difficulty about a mile and encamped on an island that had been lately overflown and was yet damp; they were therefore compelled to make beds of brush to keep themselves out of the mud.