I had a good sleep, a long one too with the shortening days.

When I began walking down the road just before sunrise it seemed as if there were whitetail deer everywhere, left, right, feeding in fields and yards.

There were more and more wild apple trees growing along the road, branches sagging with fruit, plum trees and blackberries, rose hips and other wild berries of many kinds. I ate my fill of sweet plums and blackberries. What a treat! 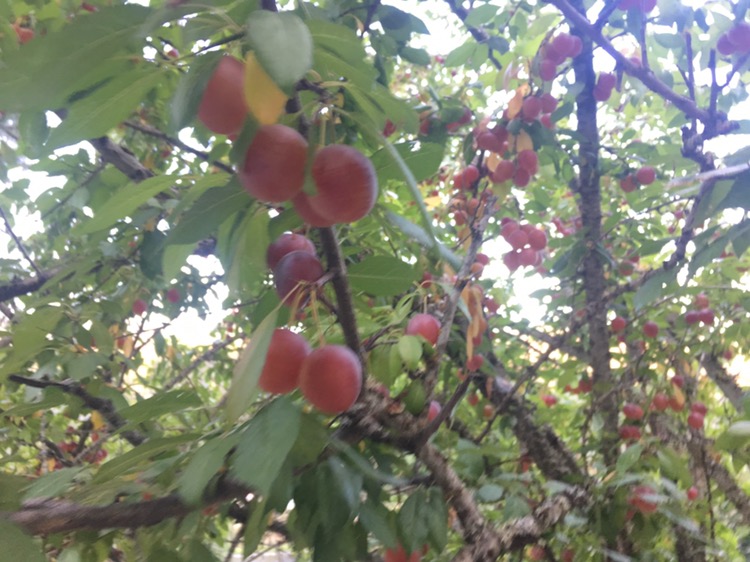 This was definitely the most wild-food rich stretch of the trip so far, and the past and present homeland of the Nez Perce. They had rivers full of salmon and buffalo over the mountains via the Lolo Trail.

Jim Griffin would be meeting me in Orofino, but I had no coverage to update him on my arrival. I stopped at a restaurant for breakfast and used their WIFI to call Griff. He was on the way.

Down the road I checked out the site of Canoe Camp. Lewis and Clark must have been just as excited as me to start a downstream journey.

Griff and Lora, his wife, arrived just a few minutes after me. We had a good chat as I sorted through my kayaking gear they had brought, as well as my backpacking gear, deciding what to bring downriver and what Griff would store. Lora had some fresh baked goods to send with me. Great friends! Thanks for the help you two. 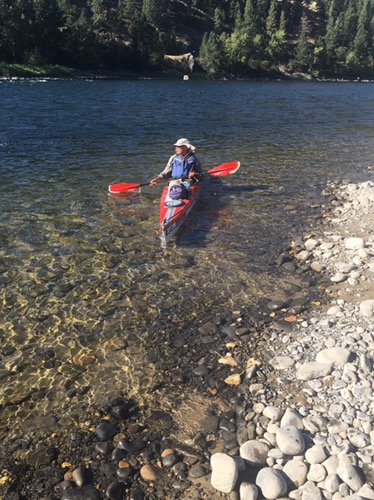 Launching on the Clearwater

After some photos and rudder-pedal adjustments I paddled downriver.

I’d heard varying reports for this stretch of the Clearwater, from serious rapids to a piece-of-cake. After the first stretch of rapids I definitely put on my spray skirt!  The river was fast, and some rapids dropped down steeply enough that it was hard to see what line to run until I was almost committed. There were considerable standing waves in places, and very fast, strong side currents at times. I definitely didn’t care to end up in that fast, cold water.

Overall though, most of the river was easy. I was making about 8 miles an hour with minimal paddling, and made it about 14 miles downriver in two hours or so, even with a couple gear tweak stops. I set up camp in a hidden spot, and picked fresh blackberries for supper.

I started my adventure five months ago today!

With my inflatable mattress I slept especially well, and packed up leisurely.

The clear, cold water carried me downstream at a thrilling pace. If the whole trip had been this fast I would have finished months ago. 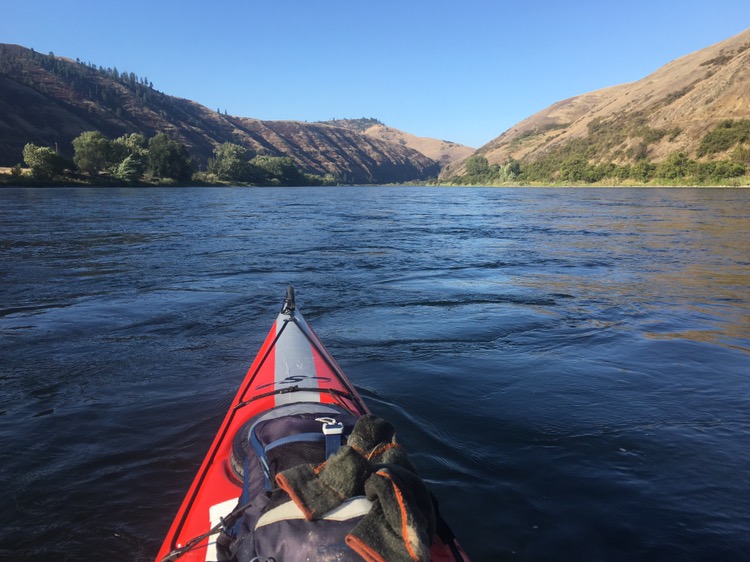 I was more confident with the rapids today. I definitely stayed alert and steered clear of the worst spots where the current  must have been going 15 mph, a bad speed to hit a rock, especially if you’re drifting sideways.

At a good landing place opposite the highway were bushes hanging with blackberries. I stopped and picked handfuls of them. What I would have given to have had such plentiful, sweet berries on my “Fortess of the Bears” trip! 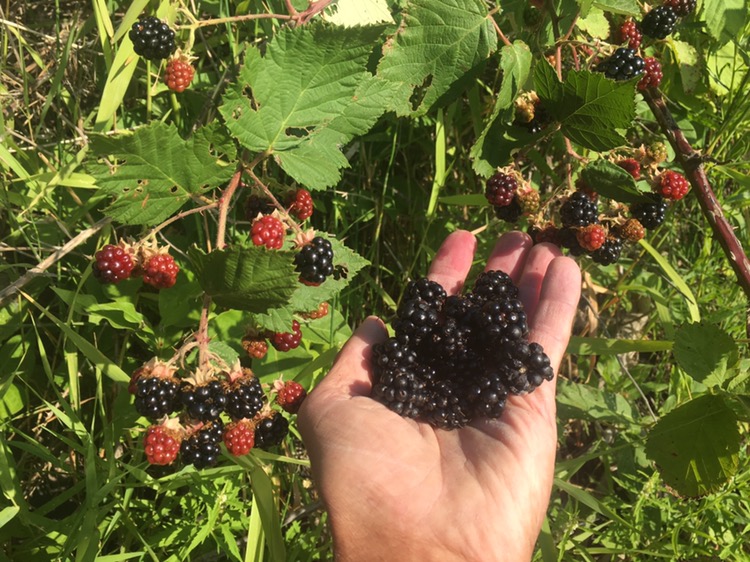 The miles flew by. Nearing Lewiston I finally got cell coverage. I called my old smokejumper buddy Sunil Ramalingham to arrange a rendezvous in town.

Maps can be misleading at times. There was a bridge in town that wasn’t shown on my map at all.

This was now an inland port of the ocean. Two big barges were being loaded with grain, thousands and thousands of bushels pouring in in plumes of dust, one barge’s bow up high as the fully loaded stern rode low.

A reporter for the Lewiston Tribune who wanted an interview took photos as I paddled up to a landing on the Clarkston side. (Hey, I was in Washington!) Eric Barker was his name and we talked in the shade. As the Outdoors reporter he was very knowledgeable about the area.

Later I slipped the cart on my kayak and made the short tow up to my motel where I got a hot shower and threw my clothes in the washing machine.

Sunil arrived later, looking much as I last saw him 20 years ago. Could it really be twenty years?! It hardly seems possible. We had a good talk getting caught up and about the old days of smokejumping and old friends. There were many good laughs. Thanks for making the drive Sunil!

I haven’t had a full day off in nearly a month, so I’ll be taking a full day off tomorrow. This is a good place: near the river with stores and restaurants just a short distance away. Colter

[Note: my guess for arrival at the Pacific, assuming things go smoothly, is about September 15.]

Clark: Tuesday 26th Septr. 1805 Set out early and proceeded on down the river to a bottom opposit the forks of the river on the South Side… I had the axes distributed and handled and men apotned. ready to commence building canoes on tomorrow, our axes are Small & badly Calculated to build Canoes of the large Pine, Capt Lewis Still very unwell, Several men taken Sick on the way down…

Septr. 27th Thursday 1805 Set all the men able to work abt. building Canoes, Colter returned and found one horse & the Canister of Shot left in the mountains he also killed a Deer 1/ 2 of which he brought hot day—men Sick

October 6th Sunday 1805… had all our Saddles Collected a whole dug and in the night buried them, also a Canister of powder and a bag of Balls at the place the Canoe which Shields made was cut from the body of the tree—The Saddles were buried on the Side of a bend about 1/ 2 a mile below—all the Canoes finished this evening ready to be put into the water…

October 8th Tuesday 1805… one canoe in which Serjt. Gass was Stearing and was nearle turning over, She Sprung a leak or Split open on one Side and Bottom filled with water & Sunk on the rapid, the men, Several of which Could not Swim hung on to the Canoe, I had one of the other Canoes unloaded & with the assistance of our Small Canoe and one Indian Canoe took out every thing & toed the empty Canoe on Shore, one man Tompson a little hurt, every thing wet perticularly the greater part of our Small Stock of merchindize, had every thing opened, and two Sentinals put over them to keep off the Indians, who are enclined to theave haveing Stole Several Small articles those people appeared disposed to give us every assistance in their power dureing our distress…

The Clearwater River is currently running 1,140 cfs at Orofino, which is pretty much as low as it is going to get this year. Since there aren’t any dams and not very much irrigation above Orofino, this may be similar to the levels which Lewis and Clark encountered in October. The first dam in the Clearwater Drainage is Dworshak Dam on the North Fork of the Clearwater, just below Orofino. Once you hit dams on the main rivers, the water levels may be little like what Lewis and Clark encountered on their way downstream. The river levels you are currently… Read more »