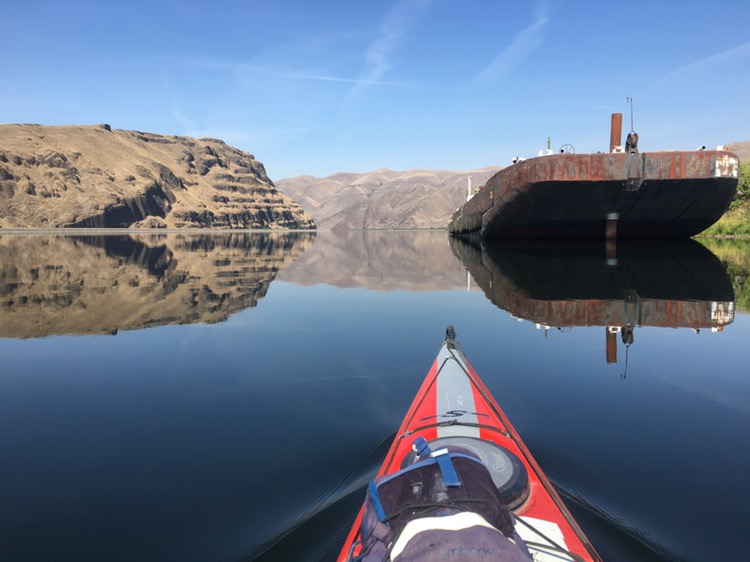 [Note: there’s been no coverage. Rod Dow met me with a feast and we drove into Kahlotus for WIFI.]

The morning of August 26 I paddled out of Clarkston and out into a windless day onto the smooth waters of the Snake River.

The day before, the 25th, had been a great rest day, one day of those rest days when I didn’t need to rush around doing a whole bunch of chores. I went to a taco place for brunch, and then when straight across the street to Arby’s for some sandwiches to go. They were for tomorrow so I put them in the fridge.

The 26th I picked up the Lewiston paper and found that the article about my adventure had appeared. Usually articles about topics I know well are loaded with errors. This one was remarkably accurate. I could have explained some things better, but that’s part of the game.

Much of the day was quite calm, with nice reflections of the impressive bluffs. From time to time I’d stop to pick blackberries. Some patches were far past their prime, some were loaded, regardless, I got all I wanted of the big, sweet berries.

At one stop I saw a baby muskrat. He let me paddle right up to him while he ate and swam around. He was very cute and bold.

It was evening when I got to the Lower Granite Dam portage. Several mule deer had come down to feed, including two bucks. I was soon rolling my kayak down the road.

There was no put-in site below the dam. It looked like I was going to have to go nearly three more miles to the next boat launch! Ouch. Soon though, I was surprised and happy to see a portage sign. There was a nice flat area of round gravel well above the water. I layer my tent down and out my inflatable mattress on top. I’d come about 32 miles. Not a bad day for a late start and virtually no current! 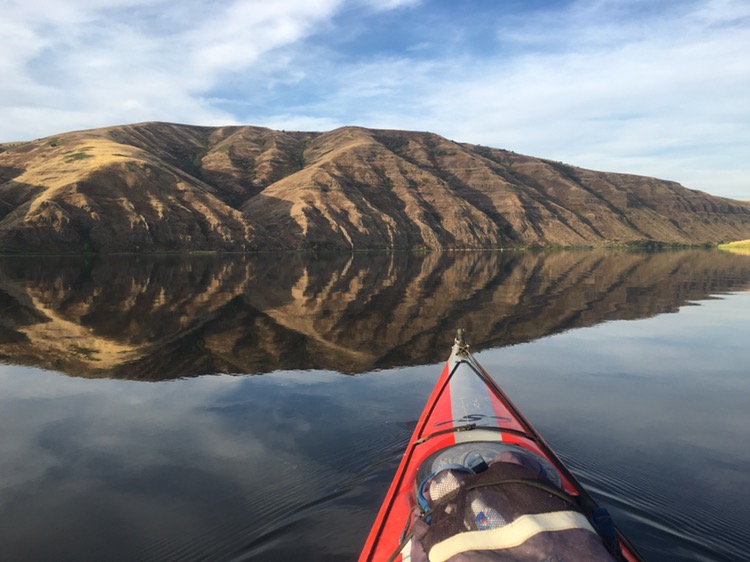 August 27
I slept great. It had been cool and mosquito free, with bats flitting against the stars. It was still well before sunrise when a light swept across my camp. What was that? A few minutes later I heard big engines. A big well-lit boat worked its way upriver. A paddle wheeler! That was a surprise.

Not far downstream was a campground full of sleeping people. I filled up my water bottles there then paddled steadily for a long time. I saw chukars along the shore, as well as a nice flock of wild turkeys. I heard quail and a pheasant. There were plenty of ospreys and cormorants as usual.

I’d put in about 13 miles when the predicted strong headwind came up. I landed and found a place out of the wind and in the shade. After putting out the solar charger to charge my phone I began reading a book. It was a good book and a comfortable spot. I read for hours as the whitecaps rolled upriver.

Twice it looked like the wind was dying and I launched, but then had to land again. One landing had bushes sagging with blackberries. I shared them with scores of wasps without incident.

At the end of the day I managed to paddle to a nice flat area with a nice sandy place to land. There I set up a comfy camp having made about 17 miles. On orange sunset illuminated the clouds all across the sky while mule deer fed along the ridgeline.

August 28
Incredibly my pants dried overnight. I was paddling soon after first light with a nice orange dawn rising behind me.

The scenery was outstanding all day long, with basalt cliffs on each side, hills that were blocking my ability to update my journal or call my Dad for his birthday.
One barge went by upriver, one of the few I’ve seen. In places there were giant grain bins, most with one giant cone of grain beneath a towering auger. What happens when it rains?

I arrived at the Lower Goose Dam portage. This was a busy place on a Sunday. There were a number of people camping there and boats launching for water skiing and fishing.

I wheeled my boat over the dam and to the turnoff to the visitor’s center. I stashed my kayak there and walked down to the fish viewing building. It had been a big thrill to arrive here when I hiked the Desert Trail in 2012 I’d been mostly in a desert world. Seeing the Snake River and the salmon swimming past the viewing window had been really fun. I got a kick out of seeing the fish this time as well.

Towards evening there was an amazing formation of vertical basalt “posts” at varying angles. Had it been at a national park it would be famous.

I found a side bay to camp in. A flock of quail flew up from the nearby willows. A coyote trotted up the sage hillside and watched me as long as he dared. A porcupine looked up from the willows, trusting to his quills.

Clark: October 11th 1805… at 6 miles we came too at Some Indian lodges and took brackfast, we purchased all the fish we could and Seven dogs of those people for Stores of Provisions down the river. at this place I saw a curious Swet house under ground, with a Small whole at top to pass in or throw in the hot Stones, which those in threw on as much water as to create the temporature of heat they wished—at 9 mile passed a rapid at 15 miles halted at an Indian Lodge, to purchase provisions of which we precred some of the Pash-he-quar roots five dogs and a few fish dried, after takeing Some dinner of dog &c we proceeded on. Came to and encamped at 2 Indian Lodges at a great place of fishing here we met an Indian of a nation near the mouth of this river. we purchased three dogs and a fiew fish of those Indians, we Passed today nine rapids all of then great fishing places, at different places on the river saw Indian houses and Slabs & Spilt timber raised from the ground being the different parts of the houses of the natives when they reside on this river for the purpose of fishing at this time they are out in the Plain on each side of the river hunting the antilope as we are informed by our Chiefs, near each of those houses we observe Grave yards picketed, or pieces of wood stuck in permiscuesly over the grave or body which is Covered with earth, The Country on either Side is an open plain leavel & fertile after assending a Steep assent of about 200 feet not a tree of any kind to be Seen on the river The after part of the day the wind from the S. W. and hard…

Clark: October 12th 1805 Saturday a fair cool morning wind from E after purchasing all the drid fish those people would Spear from their hole in which they wer buried we Set out at 7 oClock and proceeded on… 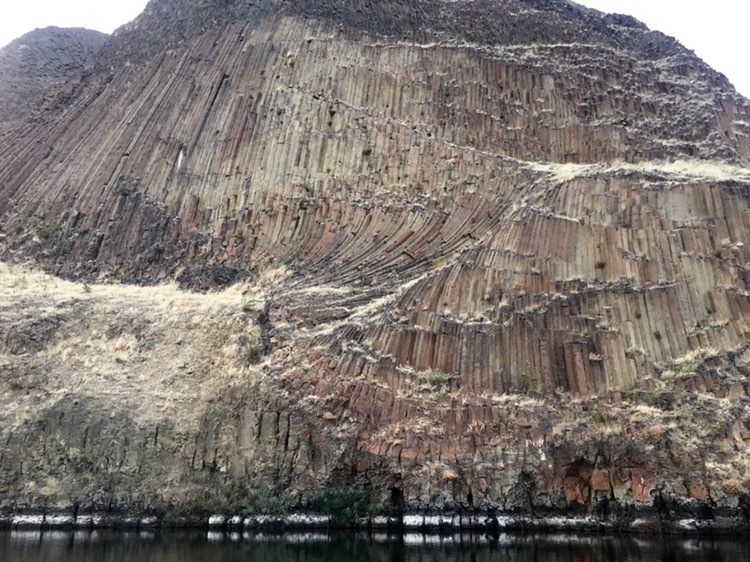 Great photo of the columnar basalt! GLASS water! Nice to see that on that river. I can imagine your feelings now. Cooler temps, low lighting, fall colors, signs of autumn. Fantastic! I was able to lock thru Ice House (?) Dam…impressive to be in that beast. I locked thru Goose too but had to portage the others. Anyway….congrats. Doing great!

Thanks Norm! So that’s what it’s called. This has been a beautiful stretch.

Hey, what can you tell me about the mouth of Columbia? I’m thinking of walking/portaging the last peninsula to stay off the salt water. What do you think?