I felt like I could have used a bit more sleep. The distant sounds of laughter and talking from the Marina Bar kept me up a little later.

With my kayak carted to the launch I began to pack my 15 days worth of food and 4 gallons of water, my biggest load yet. I didn’t pack neatly enough and barely got everything in.

It wasn’t as calm as I expected, a bit of a headwind, but still good paddling. The boat seemed a bit heavier. A few fishing boats sped across the giant lake.
With the predicted light winds and current conditions I could safely cut across the many giant, jagged side bays. I’d pick out a point maybe 3 miles distant and beeline to it. My goal for the day was 40 miles. I wanted to knock this lake out under favorable conditions.

Most points of land were covered with wildflowers. They smelled unusually strong and sweet as I passed.
This was Big Sky Country, with the widest views I’ve had since paddling. I could often see for miles up the slopes and mountains on each side, beautiful country covered with grass, sage, cedar and pines.

My headwind eventually turned to a light tailwind. A giant fish leapt out of the water and landed like a little kid doing a cannonball.

During one break I was happy to inspect the first true pines of the trip. I also noticed the first short-leafed sagebrush, the type I’m with which I’m most familiar.

I made my 40 miles, tired but triumphant. I’d looked forward to camping on “pine straw” the whole trip and this evening I enjoyed doing so. Cooked a hot meal of Knorr’s rice. Colter 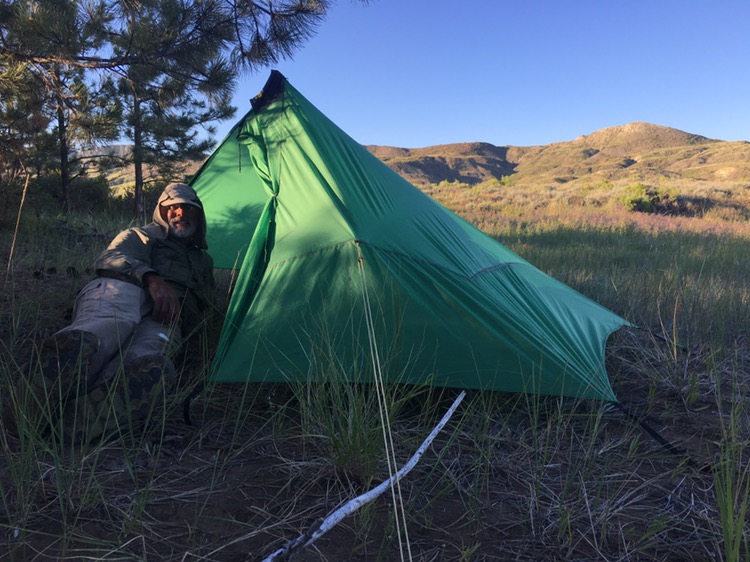 Clark: May 9th Thursday 1805… we passed the mouth of a river (or the appearance of a river) on the Lard. Side the bend of which as far as we went up it or could See from a high hill is as large as that of the Missouri at this place which is near half a mile this river did not Contain one drop of running water, about a mile below this river a large Creeke joins the river L. S. which is also Dry-Those dry Streams which are also verry wide, I think is the Conveyance of the melted Snow, & heavy rains which is Probable fall in from the high mountanious Countrey which is Said to be between this river & the Yellow Stone river—I walked on Shore the fore part of this day, & observed Great quantities of the Shining Stone which we view as quarts… saw emunerable herds of buffalow, & goats to day in every derection…

Lewis: May 10th 1805. Set out at sunrise and proceeded but a short distance ere the wind became so violent that we were obliged to come too… we sent out several hunters to scower the country, to this we were induced not so much from the want of provision as to discover the Indians whome we had reasons to believe were in the neighbourhood, from the circumstance of one of their dogs comeing to us this morning shortly after we landed; we still beleive ourselves in the country usually hunted by the Assinniboins, and as they are a vicious illy disposed nation we think it best to be on our guard, accordingly we inspected the arms and accoutrements the party and found them all in good order… saw several deer of the Mule kind of immence size, and also three of the Bighorned anamals. from the appearance of the Mule deer and the bighorned anamals we beleive ourselves fast approaching a hilly or mountainous country; we have rarely found the mule deer in any except a rough country…