Note: I have coverage here for just a bit. I’m posting yesterday’s update and also the one for June 27. As a reminder, I am doing these posts with a phone which requires cell coverage. This won’t be the last long delay in updates! When I have coverage again I will slowly catch up.

Independence Day! When I woke up last night the stars were startlingly bright. With the short nights I haven’t been seeing stars much.

I was paddling at 5 AM to beat strong winds predicted today. It was another tough day of paddling with unusually nice scenery, rugged badlands with stands of cottonwood near the river and patches of pine and what looks like spruce higher up.

Mule deer bounded away after being startled getting a drink. Bald eagles perched on prominences. A band of bighorns fed on a cliff. It’s hard to understand how they don’t fall to their deaths more often! In many shallows big fish rocketed away from my kayak, leaving wakes marking their flight.

Two kayakers headed towards me, obviously wanting to talk. I landed so we wouldn’t drift for miles. It was Diane and Warren. When they saw an upstream paddler they knew who I was. The are long distance paddlers as well and were heading at least to St Louis so we had a good talk. They gave me a can of soup and another of pineapple. My food supply is tight so it was a nice gift.

A hundred years ago this stretch of river was called the swiftest on the navigable Missouri. Dauphin Rapids was the worst of all, the cause of many steamboat mishaps. I paddled the lower part and then lined the boat to deeper, slower water, something I’ve done plenty the last two days.

The McClellend Ferry was crossing the river ahead of me. It landed just before I got there. The operator said
“No all these years you’re the first upstream paddler I’ve seen. Let me get my camera!” He also brought me some ice tea.

His name was Jack Carr. He was friendly and enthusiastic. I took a ride back and forth across the river with him as he shuttle cars. Swallows had built nests under the eaves of the deck house and continued feeding the little ones as we moved. He asked me if he could give me some food and fetched me 3 cans of beans, another great addition to my larder.

On another rapids I saw a hole in a boulder, perhaps drilled there by a steamboat to winch itself after being hung up.

I spotted a beer can in the river, floating as if it might be sealed. It was. I’m not a big beer drinker but I wasn’t going to pass it up!

The strong winds hit about 3 PM after I’d made about 14 miles. I wanted to do 20 miles but took a very long break in the shade of a magnificent cottonwood hoping to get in some paddling towards evening. I’ve been paddling so hard I have to be careful not to overdo it.

About 6 PM I decided to try to put in some more miles, hoping for an evening calm. The wind had other ideas. I made it a mile when I decided to call it good. Colter 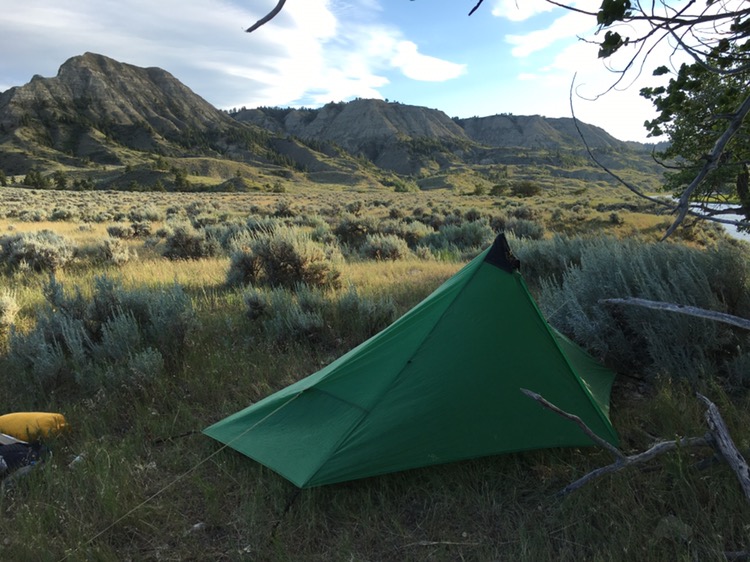 Clark:  May 27th Monday 1805. The wind blew hard from the S W. which detained us untill about 10 oClock… This day is verry warm—we only Saw a fiew Small herds of the big horn animals on the hills, and two Elk one of which We killed, we Camped at 2 dead top trees on the Lard Side. The river is Genly about 200 yards wide and Current very Swift

Wow!! Finally got an update on Buck. Have not heard anything about your progress since June 26th. Glad to see everything is going just fine. Was surprised you were so far up the river at this point and at the McClelland ferry already. Hope to see more comments by you soon.

Thanks Lundo, Probably about 4 days until the next coverage.