Three Months on the Lewis and Clark Trail

Deer snorted and stomped outside my tent, like many prior nights. There was a little thunder and lightning, wind and rain, but none of it amounted to much, and my tent and even my shoes were dry this morning.

I’ve been having a series of close calls with losing gear. Yesterday, just before shoving off, I happened to notice that my tent pole was missing. Despite having checked before I left my campsite I found it leaning in the shade of the cottonwood tree, a black pole in the black shade.

This morning I happened to notice that my green stuff sack was missing. I checked my campsite once again, it wasn’t there. I went through the boat once more and it wasn’t there either. On a third check of my campsite I found it in the tall grass, right where I had been looking. Grass green in green grass.

Things like poles and stuff sacks and knives should be of some bright color: orange, blue, red, something like that. Earth tones are far too easy to lose, and with every day being a new camp and going back to retrieve a lost item impractical, keeping track of things is super important. Not putting items down in tall grass might also be smart.

My goal today was Fort Peck. What wind I had was today a real help.  There were stretches where I flew up the river, and other stretches where the current was so fierce it was extremely tough going. I had to get out and pull the kayak in places. The water coming out from deep in the reservoir was icy cold. 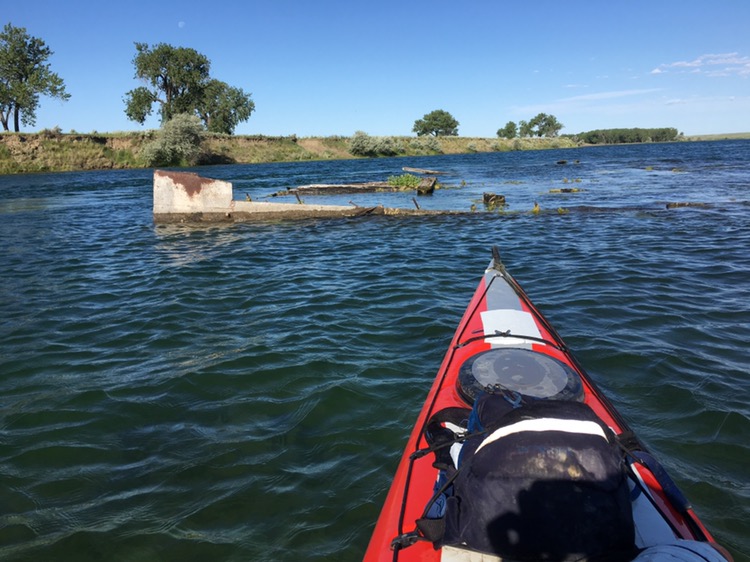 When I got to the landing I hid the boat and started walking to the Missouri River Outpost to get something to eat. Unfortunately after hiking around for a while I called and found out it no longer exists.

There was a little kid playing near my kayak when I got back. I asked him his name and he said it was Samuel Birdtail. He was from Wolf Point. Samuel was fascinated with my kayak and my trip. When I put the cart on he inspected things and asked if the stern of the kayak wouldn’t drag when I lifted up the bow. I thought that was mighty sharp of a seven-year-old to think of that immediately when I hadn’t myself. He went up and got his mom and grandpa to introduce them to me.

The cart worked really well again. Fort Peck struck me as something of a shady oasis. Shady in the good sense. There was a beautiful old Corps of Engineers building built back in the 30s. The Fort Peck Hotel was also built during that era and I had decided to spend two nights there.

I really like the vibe of this place. People who like the newest and the best might not care for it, but people like the feel of the grandeur of older days likely would.

As I ate a large pizza I watched the news about the Brexit. The pizza was great. The news, not so much. 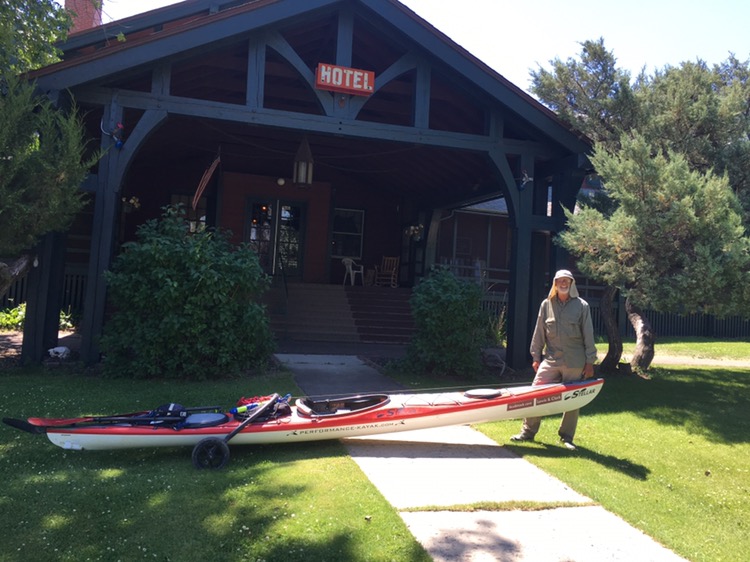 A big storm blew through this evening, with big wind and hail. I met a beautiful, especially sweet young lady from Kazakhstan here. Kind of wish I was 20 years younger. Colter
Trip overview and route map with position updates: