It was quite a storm. I was pleased how well my tent held up to the rain and wind.

Just after 6 AM I walked into Burger King. Burger King might not seem like something to look forward to but when you’re eating  primarily cold food it’s a heck of a treat. I enjoyed a couple of outstanding cheese, biscuit and egg burritos. They were hot and they were loaded with calories and they were great.  I savored a large cup of coffee while I typed up yesterday’s post. I was surprised when they came around and topped off my coffee not once but twice.

When I was packing up my stuff I found a bonus tent stake underneath my tent. It would be a good bet that another Missouri River paddler had camped there as well.  Happily the wind was much lighter than I expected in the morning, for a bit it was nearly calm. When the wind did come up it proved to be an easy headwind for a few hours.

During one break I noticed shells on the shore. I found that interesting because I hadn’t been seeing clams. On closer inspection I found that they were all fossils. For 15 minutes I walked up and down the beach finding and inspecting fossilized shells and other long extinct sea creatures. It would be fun to know in what byegone epic they lay at the bottom of some warm ancient sea. 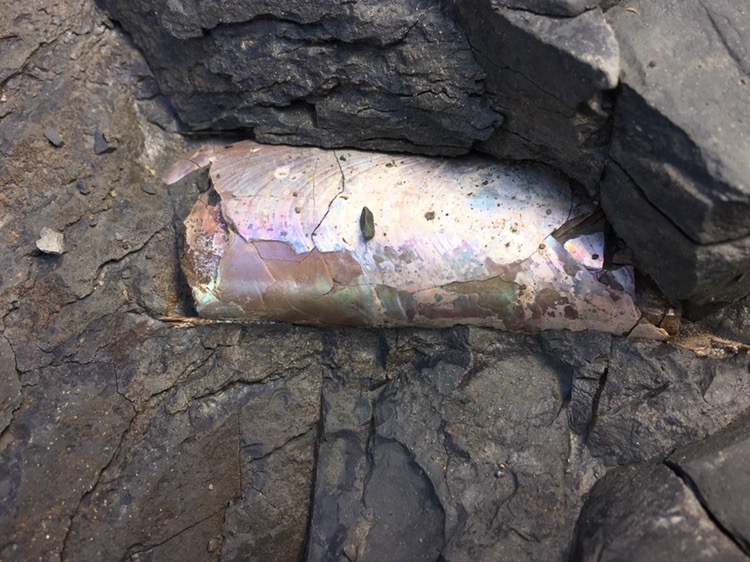 can anyone identify this fossil?

I saw a hen wild turkey, I haven’t seen a turkey in a while. Many times I startled fish that were resting just beneath the surface.

For most of the day the sun shone brightly and it wasn’t too hot. The wind was now pushing me lightly. About 4 PM dark clouds begin building to the west, slowly moving my way. I’ve been remarkably lucky about missing significant rain during the day since I began paddling, but looked like this storm was going to keep me from reaching my 30 mile goal for the day.

When it began to thunder and it looked like rain was imminent, I ran straight downwind toward the shore and a possible campsite. When I got there millions of flies had beat me to claiming it. Rain or no, I was moving on.

Just around the corner there was a trail coming down the bluff. More importantly the trail came out of trees, from what appeared to be a fairly flat shelf. Trees or even brush can be hard to find around here, and are invaluable in dealing with wind. I landed the boat and hiked 20 feet up the steep trail into a little stand of oak trees. Oak trees! I thought I had left them behind me long ago. They weren’t very big but they provided 360° of wind protection and surrounded a beautiful patch of short grass.

I made two quick trips hauling stuff up from the kayak and then dragged the boat farther up the shore where I tied it to a log.

I quickly staked out the tent and raised the peak with its single pole. Only a few rain drops had hit me when I threw everything in the tent and zipped the door closed.

Thunder rumbled louder punctuated by sharp cracks of lightning. Wind began roaring in the treetops and rain hammering down on the tent fly.

You want to talk about fun? Stumbling onto this spot in the oaks, one of the best campsites on the entire trip, and then beating the storm by two minutes, now THAT was fun! Colter

Clark: 8th of October Monday 1804…our hunters discovered a Ricara village on an Island a fiew miles above we passed the 1s Ricara Village about the center of the Island, in presence of Great numbers of Spectators and Camped above the Island on the L. S. at the foot of Some high land. (Mr. Gravotine a French man joined us as an interpeter) The Island on which is Ricara Village is Situated, is about 3 miles long Seperated from the Main L. Side by a Narrow Deep Channel, those Indians Cultivate on the Island Corn Beens Simmins, Tobacco &c &c. after Landing Capt. Lewis with Mr. Gravelin and 3 men went to the Village, I formd a Camp on Shore with the Perogue crew & guard, with the Boat at Anchor, Capt Lewis returned late, a french man and a Spaniard accompanied him

Clark: 9th of October Tuesday 1804… all the grand Chiefs visited us to day also Mr Taboe, a trader from St. Louis—Many Canoes of a Single Buffalow Skin made in the form of a Bowl Carrying generally 3 and Sometimes 5 & 6 men, those Canoes, ride the highest Waves—the Indians much asstonished at my Black Servent and Call him the big medison, this nation never Saw a black man before, the wind verry high, I saw at Several times to day 3 Squars in single Buffalow Skin Canoes loaded with meat Cross the River…

Clark: 10th of October 1804… at 1 oclock the Cheifs all assembled under an orning near the Boat, and under the American Flag. we Delivered a Similar Speech to those delivered the Ottoes & Sioux, made three Chiefs, one for each Village and gave them Clothes & flags… after the Council was over we Shot the Air gun, which astonished them, & they all left us, I observed 2 Sioux in the Council one of them I had Seen below, they Came to interceed with the Ricaras to Stop us as we were told—the Inds. much astonished at my black Servent, who made him Self more turrible in thier view than I wished him to Doe as I am told telling them that before I cought him he was wild & lived upon people, young children was verry good eating Showed them his Strength &c. &c.—Those Indians are not fond of Licquer of any Kind-

Two Months on the Lewis and Clark Trail

Looks like a clam shell. Hard to tell the size and entire shape. Cool find.