It was a nice morning. It seemed a little darker though, waking up underneath the trees.

I paddled for about two hours before taking my first break. When I got out of the kayak I looked down and found a fossil of some kind of ancient mullusc  about as big as my fist. 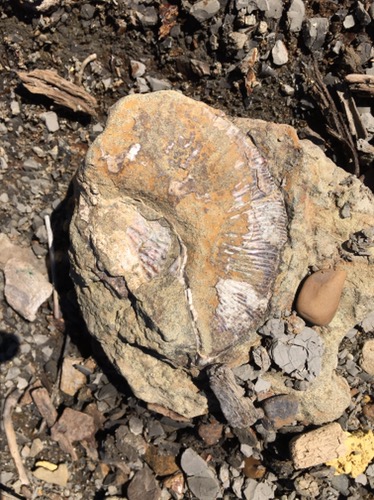 Later as I paddled past the green prairie I saw a couple of animals running towards the river: is that coyotes?  No, smaller and closer.  Prairie dogs! A small village of them. Later I spotted another village.

I was supposed to be paddling on the protected shore but instead I had a significant quartering tailwind. That’s not as good of a deal as one might think because it’s difficult to keep the boat going straight in the waves, at least it is for me.

A boat sped  across the river maybe 3 miles ahead. I noticed it’s wake appeared to be hidden behind the curvature of the earth.

When I got to Fort Yates I was looking forward to getting out of the boat and walking into town and to get a hot meal. But when I drew even with Main Street riprap covered the shore, riprap washed by waves. It wasn’t practical to land by the time there was a beach, by then it was a long walk back so I sadly gave up my plan.

A brisk wind had sprung up from the south west and  I had to cross a side bay. Waves started to build so I turned around and waited for a while. The wind finally died down some and I paddled quickly to the opposite shore which I followed, now with a nice tailwind.

I cut the corner of another bay and when I got to the other side I saw that I was looking at an island not the other shore.  A large number of blue herons and geese flew up. When I got out of the kayak to verify that I was in fact on an island I noticed a dozen or more nests full of big eggs. It was clear from the behavior of the blue herons that it was their nests. I think I could’ve picked up a 5 gallon bucket full of eggs. I took a quick photo and left.

I always like to get across the side bays as quickly as possible, so now I launched on my fourth “sprint” in fairly rapid succession. I was starting to get tired.  I landed for a break. I thought that I had paddled close to 35 miles but the maps said it was more like 32 river miles. With all my shore hugging during the day I likely had paddled a few extra miles. Regardless, I was getting tired and needed to call it a day.

There are trees on this stretch here and there, in drainages primarily. I actually set up on a gravel bar mostly protected from west wind. Just this moment two last year’s whitetail fawns were playing just outside the tent!

As I set up the tent something much more remarkable happened. I heard what I thought was a pheasant in the brush. There was the flapping of big wings and a wild turkey flew by, but what was really amazing is it had an egg in its beak! It dropped the egg onto the rocky shore where it shattered,  the hen landing next to the water. It walked down for a drink, wading out to its belly in the water.

I suspect it was an egg from the nest that wasn’t developing so it was getting rid of it. I saw that in one or more blue heron nests too, at least that’s what I had theorized.

At some point this morning I crossed into North Dakota, another big milestone! Colter

Clark: 11th of October Thursday 1804… met the 1s Chief in Council, he Thanked us for what we had given him & his people promised to attend to our advise, and Said the road was open for us and no one Dare Shut it &c. &. we took him and one Chief on board and Set out, on our way took in the 2d Chief at the mo of a Small Creek… Those people gave us to eat Corn & Beans, a large well flavoured Been which they rob the Mice of in the Plains and is verry nurishing-all tranquillity
Clark: 12th of October Friday after Brackfast we joined the Chiefs & Indians on the bank who wer waiting for us…requested us to take a Chief of their nation and make a good peace with the Mandan for them, that they Knew that they were the Cause of the war by Killing the 2 Mandan Chiefs… he gave us 10 bushels of Corn, Some Beens & Simmins… we gave them Some Sugar Salt and a Sun Glass each, and after eating a little they returned on Shore leaveing one to accompany us to the Mandans… The Ricaras Are about 500 men Mr. Taboe say 600 able to bear arms, and the remains of ten different tribes of Panias reduced by the Small Pox & wares with the Sioux, they are tall Stout men corsily featured, their womin Small & industerous raise great quantites of corn beans &c also Tobacco… Their language is So corrupted that many lodges of the Same village with dificuelty under Stand all that each other Say—They are Dirty, Kind, pore, & extravegent; possessing natural pride, no begers, rcive what is given them with pleasure, Thier houses are close together & Towns inclosed with Pickets, thier Lodges are 30 to 40 feet in Diamuter Covered with earth … Small Willow & grass is put across to Support the earth…

the Court martial convened this day for the trial of John Newman, charged with “having uttered repeated expressions of a highly criminal and mutinous nature; the same having a tendency not only to distroy every principle of military discipline, but also to alienate the affections of the individuals composing this Detachment to their officers, and disaffect them to the service for which they have been so sacredly and solemnly engaged.”—The Prisonar plead not guilty… The court… are unanimously of opinion that the prisonar John Newman is guilty… and do sentence him agreeably to the rules and articles of war, to receive seventy five lashes on his bear back, and to be henceforth discarded from the perminent party engaged for North Western discovery… he shall be exposed to such drudgeries as they may think proper to direct from time to time with a view to the general relief of the detachment.-

Clark: 14th of October Sunday 1804… halted on a Sand bar and had the punishmt inflicted on Newmon, which caused the indian Chieif to cry untill the thing was explained to him Camped opposit an antient fortification which is on the L. S, when I explained to the Chief the Cause of whipping N—he observed that examples were necessary & that he himself had made them by Death, but his nation never whiped even from their bearth.