When I woke up I was still tired from the hard paddling of yesterday, so today I got a more relaxed start, still puttering around camp as the sun came up. I put out the solar charger to take advantage of the beautiful morning sun but soon fog rolled in over the river. There has been almost no fog since I started paddling.

I would’ve been more anxious to get on the river to take advantage of this morning calm, but light winds were predicted for the entire day.

When I started paddling though, a quartering headwind had arisen. This variable headwind stuck with me most of the day but it was light enough that I was still able to make good progress. There will be much tougher paddling ahead.

There were a few fishing boats out. There have been days where I’ve seen few if any fisherman and other stretches, for example south of Mobridge, where I saw many of them. What I haven’t been seeing is fellow paddlers. In nearly 500 paddling miles I’ve seen exactly one, a kayaker in the side channel at Pierre, whom I didn’t even get to talk to.

When I reached the mouth of the Cannonball River which Clark had described in his journals I landed to look for the round stones he had described. I found them, likely some of the very same stones the men of the Corps of Discovery saw. 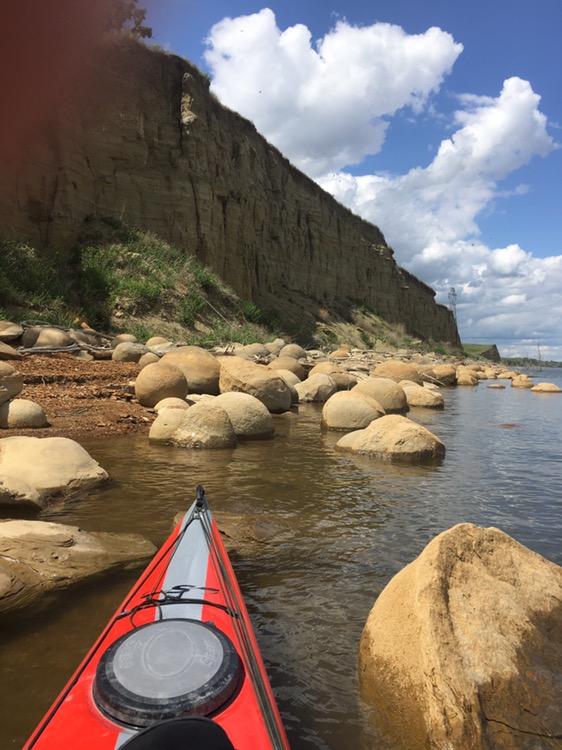 I also saw a very large non-venomous snake, five feet long I would guesstimate, and by that I mean five feet and not 3 1/2 feet exaggerated to five feet.

As the day progressed the wind slackened and so I made better time. I was putting in an hour of good paddling at a go and then finding a suitable rest stop to stretch my legs. Each time I gained about four more miles.

Large tree trunks stuck out of the water in places now and there were much more flooded trees in general. There was a stretch of perhaps 2 miles where the shore was blocked by flooded brush and floating debris. I finally had to thread my way through it to take a break.

A light current now swirled around the base of the flooded trees. I had certainly been dealing with plenty of wind and waves but this is the first river current I’d seen in many days.

Two young fisherman were on the shore.

“What are you fishing for?” I asked.

“Walleye. Where are you headed?” one said.

“The Pacific. I’m trying to follow the entire Lewis and Clark Trail.”

“Are you serious? Oh man. I’m a kayaker. Paddling the Lewis and Clark Trail is a dream of mine. Dude, you are my hero.”

Those kind of encounters are always fun.

Looking ahead I saw the opportunity for a significant shortcut. At least it would be if the water were high enough. Is the water high enough? That was the question. I went with the principal that “the shortest route is the route you know” and followed the main channel of the river. That proved to be a wise decision. As I paddled along the main channel I found that my shortcut would’ve ended on what is now dry land, and would have resulted in either a portage or a very long backtrack.

It was now nearly calm and in places the current was significant. It had been a good day. I had put in over 25 miles. Time to find a camping spot.

I was paddling through a long stretch of marshy country. Yellow headed blackbirds, geese and mallards ruled the area. I like high ground and avoiding unpleasant surprises of rising water in the dark. Finally I began seeing a few trees ahead. On one side there was a steep bank but in a few hundred yards I saw what looked to be a good landing area on the other side. When I got there though it look like it was probably knee-deep mud but I was pleasantly surprised when I stepped out and found fairly firm footing.

I set up my tent behind a windscreen of willows, then dragged my kayak up the sandy shore where I tied it to a tree. This evening I heard the winnowing sound of diving Wilson’s snipe, a sound I associate with falling asleep at 2 AM after a long shift on  many an Alaska wildfire. It is hard to believe I will never have that experience again as a smokejumper, but now this is another great adventure. Colter

Clark: 15th of October Rained all last night, passed a Ricara hunting camp on the S.S. & halted at another on the L.S, Several from the 1t Camp visited us and gave meat as also those of the Camp we halted at, we gave them fish hooks Some beeds &c. as we proceeded on we Saw a number of Indians on both Sides all day, Saw L. S some Curious Nnobs high and much the resemblance of a hiped rough house, we halted at a Camp of 10 Lodges of Ricaras on the S. S., we visited thier Lodges & were friendly recved by all—their women fond of our men—& c.

Clark: 16th of October Tuesday 1804… passed an old Shyenne Village, which appears to have been Serounded with a wall of earth; this is the retreat & first Stand of this nation after being reduced by the Sioux and drove from their Countrey on the heads of red River of L Winipic where they Cultivated the lands… Saw great numbers of goats or Antelope on Shore, Capt Lewis one man & the Ricara Chief walked on Shore

Clark: 17th of October 1804 Wind S. W. I walked on Shore with the Ricara Chief and an Inteprieter, they told me maney extroadenary Stories, I Killed 3 Dear & a Elk, the Chief Killed a Deer and our hunters Killed 4 Deer, in my absenc the wind rose So high that the Boat lay too all Day; Latd 46 ° 23′ 57″ N, I caught a Small uncommon whiperwill we observe emence herds of Goats, or Antelopes flocking down from the N E Side & Swiming the River, the Chief tels me those animals winter in the Black Mountain, and in the fall return to those mounts from every quarter, and in the Spring disperse in the planes, those emence herds we See all of which is on the N E Side of the River is on their way to the mountain, and in the Spring they will be as noumeroes on their return (some ganges winter on the Missouri)…

Clark: 18th of October Thursday 1804… We met 2 french men in a perogue Desending from hunting, & complained of the Mandans robing them of 4 Traps ther fur & Seeveral othr articles Those men were in the imploy of our Ricaree interpeter Mr. Gravelin they turned & followered us. Saw Great numbers of Goats on the S. S. Comeing to the river our hunters Killed 4 of them… we Saw a Gangue of Buffalow bulls which we did not think worth while to kill-our hunters Killd. 4 Goats 6 Deer 4 Elk & a pelican & informs that they Saw in one Gang 248 Elk

great job Buck, You’re out there doing it. I’m out riding around the country in my car and people think that is an adventure. They don’t know what it takes to do what you are doing. I only part way know because I went down stream a little. Because of your history I know you will make it but that does not make it any easier. You still have to buck the current, wind, fatigue, weather, and the hard ground sleeping etc.