It was a quiet, calm, foggy morning. I had left my tent doors wide open (with the screen door shut of course) to maximize ventilation and reduce condensation, but under these conditions dew lay heavy on the grass and on the inside of my shelter fly.

I put on my wet pants and wet shoes but under these mild temperatures it’s only a minor discomfort, they soon warmed up.

It was nice to be on the river again and off that big, wild, windy lake. Route finding seems as if it would be ridiculously easy but it can actually be challenging. If I were in a powerboat I would probably be following the most current to stay in the deepest water. Instead I wanted to find the slowest current that will still float my kayak. Many potential channels were dead ends. Several times I had to get out and pull my kayak over into deeper water.

The shore was now often lined with cottonwood trees, likely looking, in the wilder stretches, much as it looked to Lewis and Clark. 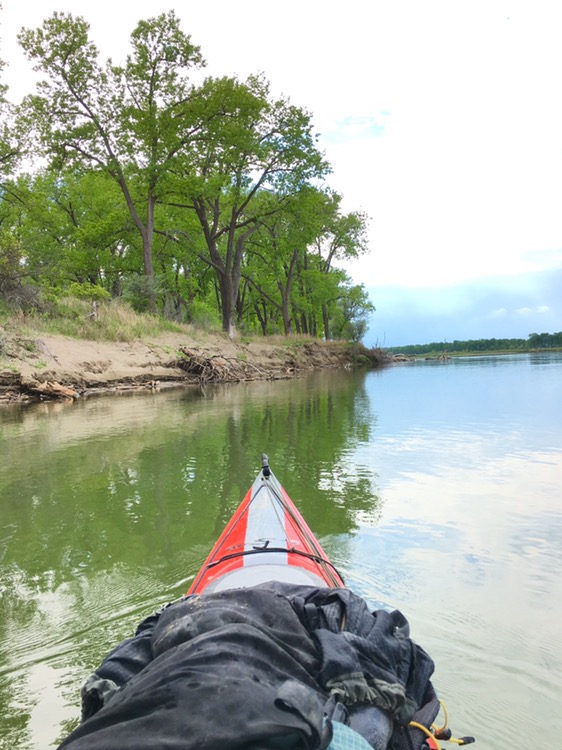 My calm riverbottom experience changed dramatically for one stretch however. On one bank was a campground, packed with memorial day weekend campers. Some people had tents set up on the shore just inches above the water. They had far too much faith that the river wouldn’t rise.   In the vicinity were many powerboaters, as often as not rushing up and down the river in a rooster tail off speed.

Then, on the other shore, appeared a scene from Mad Max. Dirt bikes gunned it, rushing up and down the beach, disappearing in the cottonwood trees and then dashing out over sand dunes. Not to be outdone, they were joined by four-wheelers and dune buggies. Many fishermen lined the shore, seemingly oblivious to the clouds of sand being kicked up and the cacophony of loud engines. A boat with a waterskier roared up and down the river, blasting music  like Rodney Dangerfield in Caddyshack.

It was a relief to escape the area.  A rain cell was coming through and suddenly the wind hit. I landed on a sandy island tied my boat off in retreated into the willows. I covered my head with my rain jacket and it sprinkled just a bit as I had a nice little nap.

The river had more current now and I paid more and more attention to find the easiest paddling. Usually I paddled the inside bends. 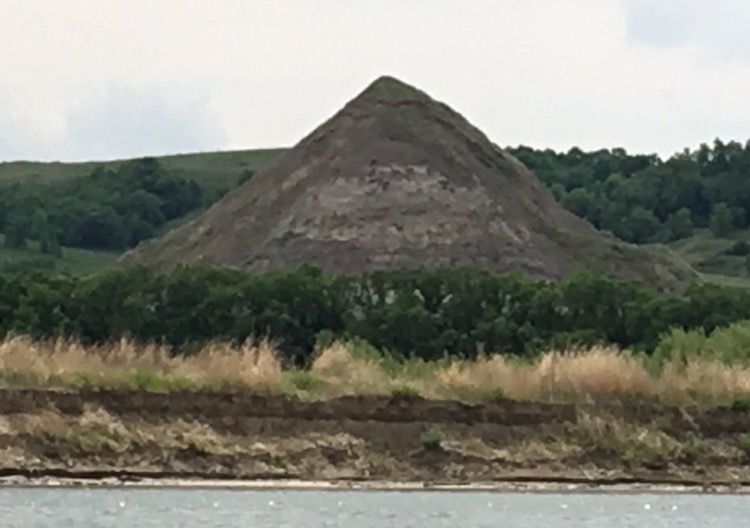 About 5:30 the sky to the north grew very dark and lightning begin flashing.  I was coming up to a nice point of cottonwood trees and I was past time for my break. I landed to explore for possible campsites. The storm’s wind hit and made the decision for me. I got a comfortable camp set up in plenty of time for the rain.

Tomorrow I should make Bismarck. Colter

Clark: 19th of October Friday 1804. Set out early under a gentle Breeze from the S. E. more timber than Common in the bottoms… observed great numbers of Buffalows, I counted in view at one time 52 gangues of Buffalow & 3 of Elk, besides Deer & goats &c… I also Saw an old Village fortified Situated on the top of a high Point, which the Ricarra Chief tels me were Mandans, we Camped on the L. S. I Killed a Deer & Saw Swans &c. our hunters Killed 4 Elk and 6 Deer to Day

How many asked you what you were doing? I never could figure out why people would want to go to the river and bring with them the noise, speed, and sounds of the city and traffic. Crazy world out there.

Norm, nobody asked what I was up to. I guess people enjoy different things!